With her neck contorted and head tilting onto her left shoulder, 16-year-old Sanjida looks decidedly uncomfortable as she sits on a blue plastic chair by the door of her family's shelter in a refugee camp in southern Bangladesh. But the fact she is sitting up at all has everyone beaming.

After four years of increasing paralysis brought on by untreated meningitis, the Rohingya girl has recently regained some movement thanks to a pioneering programme to help people with life-threatening illnesses in the swelling refugee camps.

Sanjida is one of more than 671,000 Rohingya pushed into Bangladesh since last August by a violent military crackdown in Myanmar’s northern Rakhine State.

Along with the refugees, medical workers flooded into Cox’s Bazar. They treated traumatic injuries, raced to reverse severe malnutrition exacerbated by displacement and disease, and set up an emergency medical care system in the chaotic first weeks of the influx. But despite the scale of the response, healthcare advocates say thousands of people with incurable diseases are still ignored by a system that overlooks the needs of the dying or gravely ill.

"It really is about the dignity of the individual. There's enough indignity within these humanitarian situations."

"I saw people were treating only acute patients and palliative care was being neglected," said Farzana Khan, a doctor who founded the Bangladesh-based Fasiuddin Khan Research Foundation, a private group that set up the programme that helps Sanjida and 200 other severely ill patients.

Advocates of palliative care say it’s the first programme to offer dedicated help for people with chronic or life-threatening illnesses during a humanitarian response.

"There's absolutely no reason why palliative care can't be there as part of the health system," said Joan Marston, co-founder of PalCHASE (Palliative Care in Humanitarian Aid Situations and Emergencies), a UK-based organisation that advocates for such assistance to be included in responses to disasters and conflict. "It really is about the dignity of the individual. There's enough indignity within these humanitarian situations."

There’s no allotment for palliative care in the recently released $950-million Rohingya response plan, which outlines the aid sector’s priorities through the end of the year. But Marston said the scarcity of this kind of care during humanitarian emergencies reaches far beyond the current crisis in Bangladesh.

PalCHASE is pushing for emergency response plans to include palliative care from the outset, so medical workers can avoid difficult decisions about whom to treat – something the organisation's co-founder, Brett Sutton, said can be effectively forced on medical responders.

"There’s probably a sense that it’s a little bit luxurious [to focus on the terminally ill] and should come down the list of priorities," Sutton said.

Khan’s programme employs eight Rohingya health workers. They care for patients by providing medicine and foods that may aid recovery, or distributing books or toys for emotional support.

They also look for other patients by talking to people living in the dry, dusty hills of the sprawling camps. 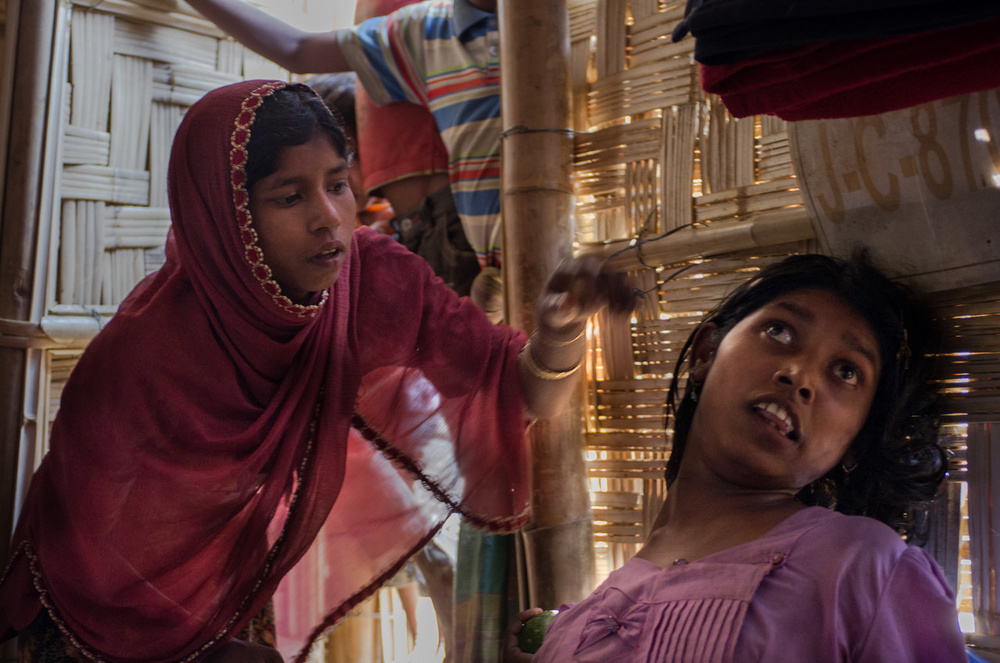 Kaamil Ahmed/IRIN
Khaleda, 18, tends to her younger sister Sanjida, 16, who was almost completely paralysed after contracting meningitis in Myanmar. Sanjida has regained limited movement after being treated for pain symptoms in the Rohingya refugee camps.

"We are trying to improve the quality of life as long as they are living,” said Khan, who spent more than 20 years establishing palliative care practices in Bangladesh before her work with the newly arrived Rohingya. “Dignity and respect: that is our core approach."

Though patients like Sanjida cannot be cured, Khan said "it is really a miracle" that the girl has regained some control over her body after arriving in Bangladesh in such a frail state.

Sanjida's condition had been so severe that even when nearby villages were under attack last year, her family initially planned to stay put. Instead, Sanjida’s older brother carried the girl on his back during the 10-day journey to Bangladesh.

Sanjida’s 18-year-old sister and full-time caregiver, Khaleda, said Sanjida had been “like a ghost” during her worst periods, when she could only lie down and scream in frustration.

“She couldn’t do anything else,” Khaleda said, teasing a full-toothed grin from her younger sister. “Now, she’s happier, she can move by herself, she can call us when she wants someone to brush her hair.”

In a November assessment and report, Khan and researchers with the group World Child Cancer estimated that thousands of people in the Rohingya camps may need palliative care but aren’t getting help. 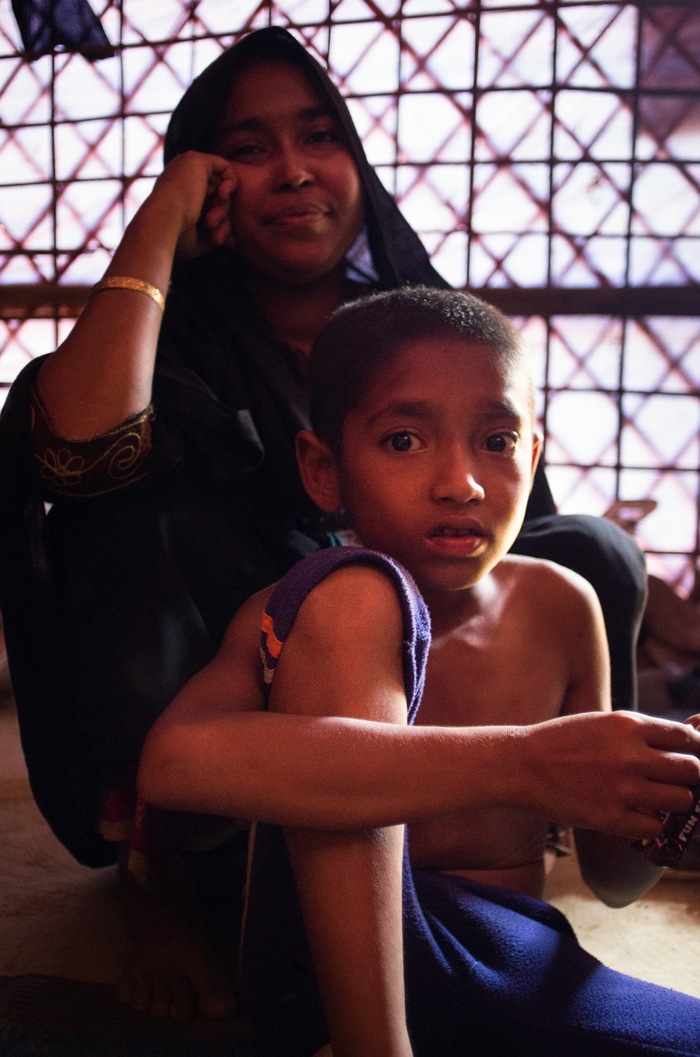 Kaamil Ahmed/IRIN
Mujibur Rahman lives with a rare form of bone cancer doctors say is too advanced to cure. The 10-year-old Rohingya refugee previously used a wheelchair, but has become more active after starting treatment to help with his pain

In interviews with more than 150 refugees with life-threatening illnesses, as well as their caregivers, researchers found that three quarters were living in pain. Sixty percent of respondents stopped taking pain medication because they couldn’t afford to pay for it, while a large majority of caregivers often had no training on how to look after their family members.

“Many of those who could have been provided essential palliative care and pain relief will die, unreported and uncounted,” the report stated. “To save lives in humanitarian emergencies has often meant that the suffering of those who cannot be cured is neglected or forgotten.”

For now, treatment for terminally ill Rohingya in Bangladesh still relies on isolated efforts like Khan’s. While Khan often refers patients to field hospitals and clinics run by aid groups for specific treatment or surgery, her programme takes in people that even well-resourced operations have deemed beyond medical help.

While visiting a field hospital where one of her patients was having a tumour removed, Khan met 10-year-old Mujibur Rahman, who suffers from a rare form of bone cancer too advanced to cure.

"He could not walk, he could only sit and was in a wheelchair,” she said. “I was a little depressed because I didn't know what to do with him. We started pain management, and after 10 days he started walking and limping. After two months, now he can walk."

Asked about a football Khan’s team had brought him, Mujibur rummaged through the back of his mother's tent and produced a crumpled piece of plastic – the ball had collapsed from so much use.