After tyres finish burning, what is left is a matted mesh of singed black wire. In Kenya’s western city of Kisumu, they hug curbs and roundabouts, leaving dark, circular footprints where the road melted underneath.

This is the Nyanza heartland of opposition leader Raila Odinga, where demonstrations have erupted since August against the Independent Electoral and Borders Commission’s perceived bias, and again today as Kenyans go to re-run elections – polls the opposition have boycotted.

The protracted election crisis has accustomed people in Nyanza to defiance. Here, the explosion of a tear gas canister is met with cheers. Protesters run into the white fumes. They salvage undetonated canisters and throw them back at police the next time. Even as live rounds crack into the air, in the distance a spinning slingshot always emerges.

It was in some ways no surprise then that on the eve of the 26 October election, Odinga – twice a losing presidential candidate – announced he was transforming his National Super Alliance (NASA) into a National Resistance Movement to confront the “electoral dictatorship” of the ruling Jubilee Party.

The trigger was the inability of the Supreme Court, in dramatic televised failure on Wednesday, to reach a quorum and rule on a petition to postpone the poll re-run.

The court had earlier nullified the August presidential election over procedural failures. Few neutral observers believed a divided IEBC had been able to fix its problems over the past 56 days.

Residents of Mamboleo, a neighbourhood outside Kisumu City, certainly did not. Like protestors throughout Nyanza, they set up roadblocks to prevent ballot papers from being delivered on Wednesday. All along the shoddy, pot-holed dirt road, piles of stones and bricks – even a telephone pole – were laid out.

As paramilitary GSU escorted a convoy of vehicles, screams and hoots, wild and crude, came from protesters hiding behind gates and in between corrugated metal shacks – and from police themselves. Tear gas and rocks were exchanged, insults too. Doors were kicked in and shots fired in the air.

Turnout was so low today in four counties in Nyanza that the IEBC postponed the vote.

These are alien scenes for Kenya, a middle-income regional leader. But they offer a disturbing glimpse into the possibility of the abyss beyond this disputed election. 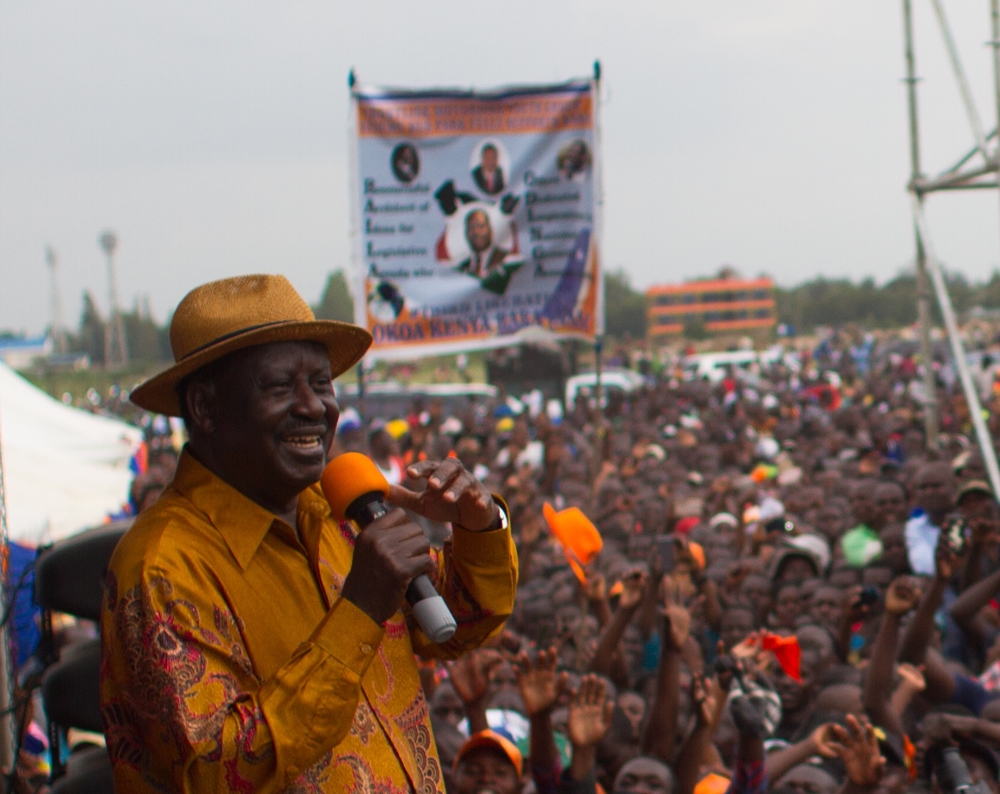 Odinga has voiced an anger that has been swirling here over the perceived manipulation of the institutions of the state by President Uhuru Kenyatta, and the alleged victimisation of a region and people seen as opposing him.

You hear it at the People’s Parliament in Kisumu’s city square where the supposed words of Thomas Jefferson are approvingly repeated: “When injustice becomes law, resistance becomes duty”.

The “resistance” already has its martyrs. Last week, 18-year-old Michael Okoth Okello was killed in the violent aftermath of anti-IEBC demonstrations in Kisumu – shot in the neck by police.

The Kenya National Commission on Human Rights released a report highlighting cases of violence in the wake of the annulled 8 August election. The report documents 37 deaths, 35 of them committed by the police.

Kenyans living in NASA strongholds like Nyanza and pockets of Nairobi – especially those like Odinga of Luo ethnicity – were disproportionately represented among the victims.

There have been high-profile condemnations of ethnically targeted police brutality, like the campaign “Luo Lives Matter” championed by Kisumu Governor Anyang’ Nyong’o.

Many here in Kisumu point to the difference in police response when Kikuyus – the country’s largest ethnic group and generally seen as supportive of Kenyatta – demonstrate.

“You don’t see police shooting the ‘Nairobi Business Community’ who come out armed to defend their businesses, families, and even Uhuru’s presidency,” said George Siwa, an electrician in Kisumu who attended Monday’s anti-IEBC demonstrations.

Odinga, 72, a polarising political figure in Kenya, made that link to ethnically targeted violence in his address on Wednesday.

“As we speak, truckloads of paramilitary and police officers have been deployed to commit massacre, especially in western Kenya and Nairobi with the sole purpose of protecting an illegitimate hold on power,” he said.

“We have seen them rope in militia, dress them in police attire, arm them, and unleash them on protesters with deadly consequences,” he alleged.

The reference to militia is a nod to a belief here that a criminal Kikuyu militia, known as Mungiki, has been revived and has infiltrated the police. 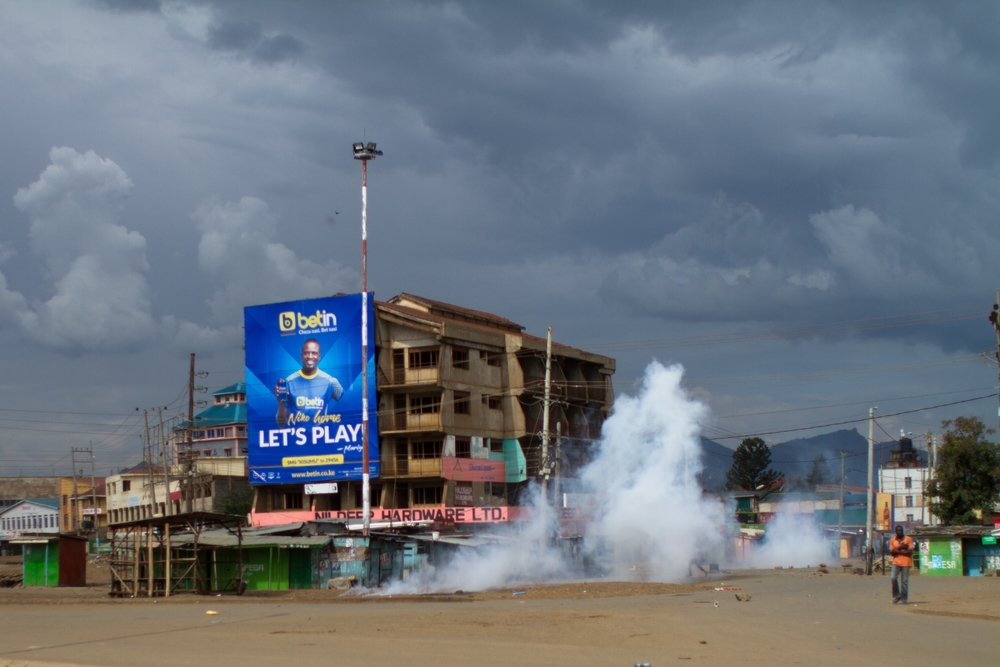 It harks back to the violence of the 2007/08 elections, when Mungiki and rival Kalenjin militia were accused of ethnic killings, although many of the 1,500 people who died were shot by the police.

Both Kenyatta and his then-opponent, William Ruto, now deputy president, were indicted by the International Criminal Court for their alleged roles in the violence.

The charges were withdrawn due to insufficient evidence, after both men had formed the Jubilee Party to defeat Odinga in the disputed 2013 election.

Whether Mungiki is in fact back in operation, the important point is that it is a widely held belief in Nyanza. It draws on the idea of official consent; it’s symbolic of unresolved but familiar conflicts that stretch back to independence.

In the midst of this heightened ethnic tension, acting Cabinet Secretary of the Interior Fred Matiang’i said at a Jubilee rally last week that he was an enkororo – a member of the outlawed Kisii ethnic militia, Chinkororo.

His comment, spoken in Gusii, was meant as a threat to anyone planning to interfere with IEBC voting centres. But the more disturbing implication – especially for Luos – is that even the head of the police may not be above the use of non-state ethnic militias to create “order”.

Demonstrators in Kisumu now shout “Mungiki” at the GSU. Anecdotes and “fake news” encourages the belief that it was not the police who killed Okoth but the Kikuyu militia in police uniform.

“Why would the government hire militia groups? It is training them to satisfy their own interests,” said Smith Hempstone Otieno, a student at Kisumu Polytechnic. “You understand that this is the kind of government that is trying to oppress the will of the people.”

Protesters now say the struggle is no longer about sharing or rotating power between ethnic groups, but ending what they see as an intractable pattern of Luo disenfranchisement.

What is less readily acknowledged is that Jubilee ran a slick and well-funded campaign that appealed to swing regions of Kenya. NASA’s, by contrast, seemed less strategic.

But in Nyanza, Jubilee’s determination to go ahead with the election, ignoring widespread calls for a postponement, feels like the cynical zero-sum calculation of past elections.

In recent rallies, NASA supporters have shouted to politicians “Bunde! Bunde!” (“guns” in Dholuo). Asking for weapons is a startling step-change in resistance.

“All we have now are stones and tear gas,” a young demonstrator told IRIN. He pointed to the blue hills behind the flyover at Kondele. “Beyond that is our border with the Kalenjins... So, the lasting solution is you keep your side, we keep our side, so we can move forward.”

That the idea of secession is being talked about by some in Nyanza is an indication of the depth of frustration.

“They are doing things as if they are in their own republic. We need peace and a lasting solution,” said an elderly man at the People’s Parliament who did not want to be named. “In fact, where we are heading, if we want peace and we don’t want to be killed, then at least let us divorce.”

That has the support of some senior politicians. Governor Nyong’o, on the day before the election, told international media that he may propose to host a conference in Kisumu to discuss possibilities, risks, and opportunities of forming a “People’s Democratic Republic of Kenya”.

Judged from the government buildings and gleaming office towers of Nairobi, that would seem an unsound and impractical idea.