The children, all refugees and mostly from Syria, filed awkwardly into the unfamiliar school. With its lush grounds and English posters on the walls, it was starkly different from their government-run public school in an outer suburb of Beirut.

In a gym room upstairs, the Syrian children lingered on one side and those from the private school on the other, but not for long. As part of an integration workshop run by the Beirut Art Centre and Seenaryo, an arts and education charity, they were put into pairs – one from each school – and then into groups to come up with a short play. By the end of the workshop, they had visibly relaxed. “I liked meeting new people,” said a boy from the private school. “I’ve never met anyone from Syria before,” said another.

Seenaryo runs these workshops regularly and commonly hears from the Lebanese children that they have barely interacted with a Syrian before, and vice versa. This is despite the fact that Lebanon has the highest per capita concentration of refugees in the world. As of December 2016, there were more than one million registered Syrian refugees in Lebanon, according to the UN’s refugee agency, UNHCR. As many more are not registered, the actual figure is likely even higher. In a population of just four million, that means that at least one in every four people is Syrian, and yet host and refugee communities rarely mix – a situation that has allowed mutual resentment and suspicion to breed.

Half of the Syrians in Lebanon are under the age of 18. When they first began arriving in 2011, they had little access to education beyond informal and emergency schools set up by NGOs. As these were not formally recognised, children could not obtain proper qualifications and go on to further education.

In 2014, the Lebanese government took the unprecedented step of introducing a “second shift” of classes at public schools for refugee children. They could attend without having to provide proof of legal residency or pay school enrolment fees. The new system offered hope to thousands of refugee families, and the chance for children to get a formally recognised education.

There are now around 195,000 non-Lebanese children – nearly all Syrian – enrolled in Lebanese public schools, narrowly outnumbering the Lebanese children. The vast majority attend second-shift classes, held in the afternoons for refugees only.

Although the second shift system has obvious benefits, it comes with its own set of problems. By the afternoon shift, teachers are exhausted and learning time is compressed. “Human resources are stretched very thinly,” explained Oscar Wood, co-director of Seenaryo. “There are not always new teachers in the second shift, and core staff like heads and senior leadership have to stay all day.”

Even the best-developed infrastructure would feel the strain of such a system, but Lebanon’s public schools were already struggling before the influx of Syrian students.  An August 2016 report by the Lebanese ministry of education noted that public schools had been in “slow decline” for years. Problems with violence, poor discipline, and low teaching standards are so severe that only 30 percent of Lebanese children attend them; the rest go to private schools.

Partly because of these problems, but also because of the economic pressures on refugee children to work, around 250,000 Syrian children are either not enrolled in school or have dropped out before achieving a meaningful level of education. “Lebanese public schools are not succeeding in enrolling children and getting them to attend regularly,” said Wood.

For some Syrian children, supplementary schools are filling the gap. Dama School in the Bekaa Valley is run by 39-year-old Ghada Misto, who used to run nurseries and schools back in Daraya, Syria, where she is from. Teachers at the school are Syrian, but trained in the Lebanese curriculum. Almost all the children (aged six to 15) are also registered for second-shift public schooling. They come to Dama in the morning and go to public school in the afternoon. It means a long day, starting at 8.30am and finishing at 6pm, but it drastically improves their educational outcomes.

“The biggest challenge for Syrian children entering the Lebanese education system is the foreign language component,” Misto told IRIN. “But also the neglect happening in the public school system, which affects not only Syrian kids, but Lebanese.” 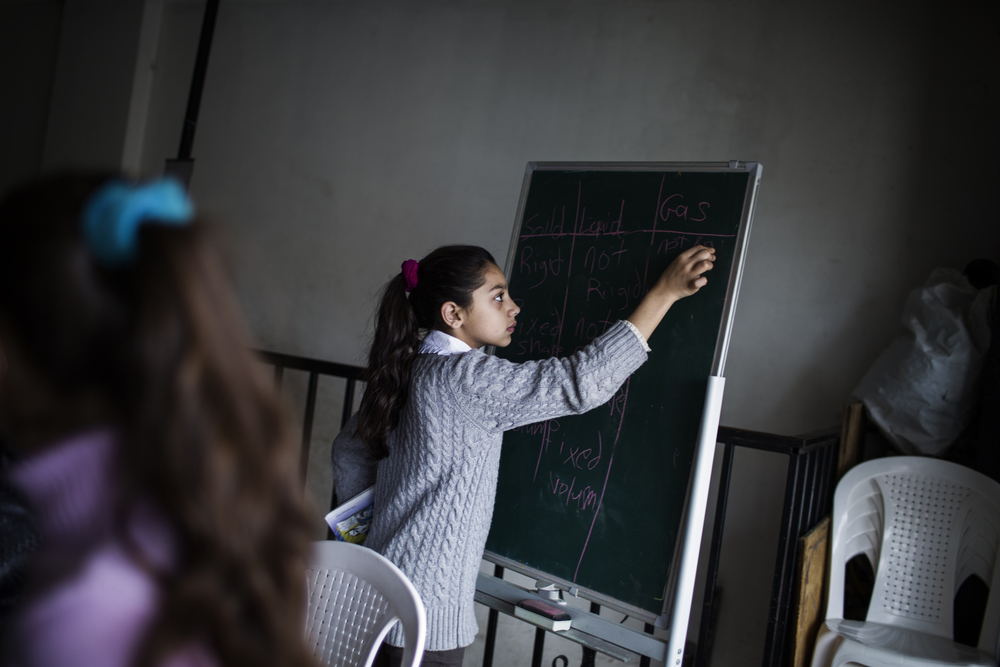 Diego Ibarra Sánchez/UNHCR
Lana, an 11-year-old from Syria, attends a homework support group at a makeshift school in Saida

Some analysts have pointed out that the influx of international aid triggered by the refugee crisis presents an opportunity for Lebanon to overhaul its entire public education system.

Britain’s Department for International Development, for example, is channelling all its funds for refugee education through the Lebanese state system. In 2015, DFID announced that it would provide up to £20 million to support “Lebanon’s severely overstretched school system”, and in 2016 it announced another £100 million over four years. The money is being used to build and renovate schools, buy textbooks, and “raise standards” for Lebanese and refugee children.

But the funding hasn’t addressed the issue of segregation. The second shift system means that Lebanese and refugee children rarely share a classroom. Partly, this is because of limited physical spaces and language differences – the Lebanese children are taught most subjects in English or French, while Syrian children are taught in Arabic.

However, according to Chiara Butti, Lebanon country director for the peace-building organisation International Alert, discrimination also plays a role. “Some Lebanese parents will take their children out of school if Syrian kids attend because they think this will lower the quality of the teaching or they just don’t want their kids to have Syrian friends,” she said.

Wood of Seenaryo described the second shift system as “a disaster” for integration. “Below a certain age, I really don’t think there’s a reason to have children in separate classes,” he said. “I’ve seen the level of English and French in a Lebanese public school and it is very low. Until [age] six, seven, eight, Lebanese teachers tell you, they’re speaking loads of Arabic.”

Research by International Alert has found that children’s integration at school can have a huge impact on community relations between refugees and locals. “We did research looking at perceptions in mixed classes versus perceptions in segregated classes – there was a massive difference,” said Butti. “In segregated classes, Lebanese children say, ‘I don’t have a Syrian friend, they’re different, they stink’. When they go to school together, they’re more open to the other, saying ‘we have Syrian friends’. It even has a similar impact on parents.”

But the very idea of integration is controversial in Lebanon, where the government is keen to emphasise that Syrian refugees are temporary guests. To get around the sensitivities, many NGOs frame their integration work as creating “social stability” and fostering friendly relationships between communities.

A spokesperson from DFID described the second-shift system as an important short-term fix, but noted that in the longer term there was a need to shift to more sustainable solutions, such as expanding the capacity of schools and offering catch-up classes in French and English for Syrian students.

“When you are talking about humans, it cannot be solved later,” commented Omar Hchemi, director of a private school for Lebanese and Syrian children in the Bekaa Valley. “Syrians are not getting enough education in Lebanon. Education is the most important thing – or a whole generation will be lost.”

(TOP PHOTO: Syrian and Lebanese students sit together in classes at one of the few mixed elementary schools in Tariq el Jdideh, Beirut. Adam Patterson/Panos/DFID)