Last February, Jordan and the international community agreed on a radically new approach to the Syrian refugee crisis. Instead of viewing refugees as a burden that could only be alleviated by humanitarian aid, the new agreement described them as “a development opportunity” that, with sufficient levels of investment and structural reforms, could benefit Jordan’s entire economy.

The Jordan Compact was welcomed as a potential blueprint for other host countries looking for ways to reduce their dependence on dwindling sources of aid and shift towards a development response that helps refugees become more self-reliant.

According to the World Bank, which is helping to fund the compact’s implementation, it’s “a win-win proposition for Jordan”, but more than a year later, Jordan is struggling to translate its new approach into more economic opportunities for Syrians or Jordanians.

The small, resource-poor country of 9.5 million people – three million of them foreigners according to the 2016 census – has a long history of absorbing the region’s displaced. Beginning in 1948, Jordan welcomed waves of Palestinians, and then in the 1990s and 2000s, it was Iraqis. Each influx has added jobs, cash, and diversity to the economy.

But the arrival of close to one million Syrian refugees over the past five years (only 657,000 of whom are currently registered with UNHCR) has been tougher to absorb. The issue is partly demographic: Many of Jordan’s Syrians are from poor, rural areas of southern Syria, in contrast to the well-heeled Iraqis who flocked here decades earlier. Meanwhile, the war in Syria and border closures with both Syria and Iraq have hit trade, crippling Jordan’s export economy and compounding the strain of coping with so many needy newcomers.

Jordan’s economic slowdown has not been helped by the fact that Syrians are largely prevented from working legally. This is designed to protect Jordanian jobs in a stagnating market with an unemployment rate of 15.8 percent (around double that for youth), but has kept hundreds of thousands of Syrians dependent on aid and low-paid, informal work. This has driven wages down, edging out many Jordanians, and resulted in lower government revenues from taxes and employer social insurance payments.

The Jordan Compact, agreed at a major donor conference in London in February 2016, secured $1.7 billion in grants, low-interest loans, and pledges from the international community, in return for Jordan opening up its labour market to Syrian refugees. Besides funding, Jordan was promised access to tariff-free trade with the EU, providing it issued at least 200,000 work permits to Syrians. Until that target is hit, businesses located in 18 special economic zones (SEZs) throughout Jordan can unlock preferential access to the EU market by employing Syrians as 15 percent of their workforce in the first two years, and 25 percent thereafter.

One year on, Jordan has secured $923.6 million in funding, including $147 million in World Bank loans and a December 2016 cash transfer from the United States of close to half a billion dollars. But the hoped-for results haven’t yet materialised. Work permits were made widely available to Syrians from April 2016, but by February 2017, just 38,516 permits had been issued, according to Jordan’s Ministry of Labour. 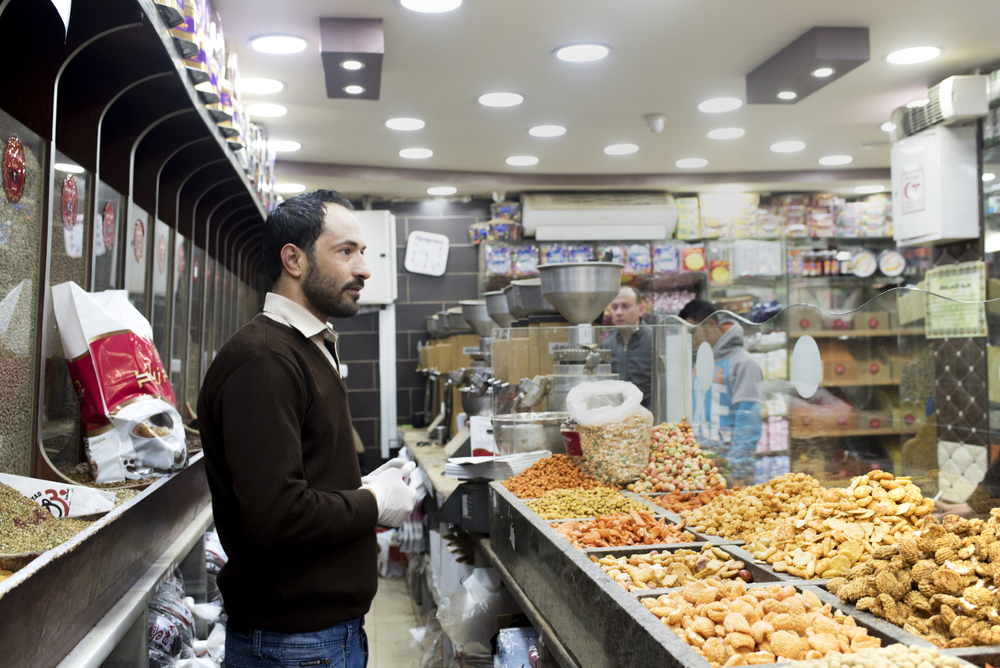 Alisa Reznick/IRIN
Ahmad Yassin Hamood, 28, successfully applied for a work permit through his employer at a nut roastery in Amman last summer

Thirty-year-old Daraa native Ahmad Alhmood recently acquired a work permit after years of working in a food shop without one.

“Before getting my permit I used to watch my back all the time. I worried all the time that the authorities could come to my work,” Alhmood told IRIN.

Syrians caught working illegally can be arrested, detained, sent to Azraq refugee camp, and, in some cases, deported back to Syria. Alhmood referred to his permit as his “legal weapon” against such outcomes.

“Now, I am like any foreign worker in Jordan. I have my rights and I know that I am legally entitled to them,” he said. Those rights include being paid the minimum wage, recently raised from 190 to 220 Jordanian dinars ($268 to $311) per month, and social security.

But, for many Syrians, the gains of formalised employment aren’t worth the potential losses. Humanitarian agencies say some refugees fear losing access to aid or the chance of resettlement to a third country. Others prefer to remain under the radar rather than risk registering with a government they don’t fully trust.

“I believe no permit will protect me in Jordan,” said a Syrian father of one who works in an office in Amman and asked not to be named. “It’s always a matter of how you react with the authorities when they ask to see your papers, and if this guy wants to make things hard for you, then your permissions won’t help.”

This trust deficit doesn’t help, but neither does the fact that not every Syrian who wants a permit can get one. Some professions – engineering, medicine, and teaching, for example – are off-limits completely to refugees, and other occupations for which permits are supposed to be available, are very difficult to get in practice.

Basel, a 24-year-old refugee living in Irbid in northern Jordan, is the sole breadwinner for seven members of his family. He is desperate to make his job at a restaurant more secure by regularising his employment status but described the procedure for getting a permit as “a little bit complicated”.

That’s putting it mildly. The Jordan INGO Forum, a network of 51 international NGOs responding to the Syrian crisis in Jordan, released a document in December called the Work Permit Maze, which maps the labyrinthine steps refugees must take to regularise their employment.

Several business owners contacted for this article said the process of getting a work permit for their Syrian employees was simply too complex and time-consuming. Most continued to employ Syrians without permits.

SEZs have the potential scale needed to quickly reach the 200,000-permit goal, but progress towards hiring more Syrians has been slow. Jordan’s Chamber of Industry has argued that Syrians could be a natural fit for industries that struggle to lure Jordanian labour. Currently, the garment manufacturing industry, which accounts for around 20 percent of Jordan’s GDP, hires large numbers of mainly Asian foreign workers to work on SEZs around the country.

For Classic Fashion, employing locals and refugees is still a goal, but one motivated more by corporate social responsibility than any incentives on offer through the Jordan Compact.

Classic Fashion set out to hire 500 Syrians last year, but “unfortunately, the response was very, very negative”, said Kumar. Numerous job fairs resulted in just 30 Syrians coming to work for the company. Many stayed only a few days and, months later, just four Syrians remain on its payroll. Even they aren’t working in the SEZs, where workers live on site, but at satellite factories closer to urban areas. 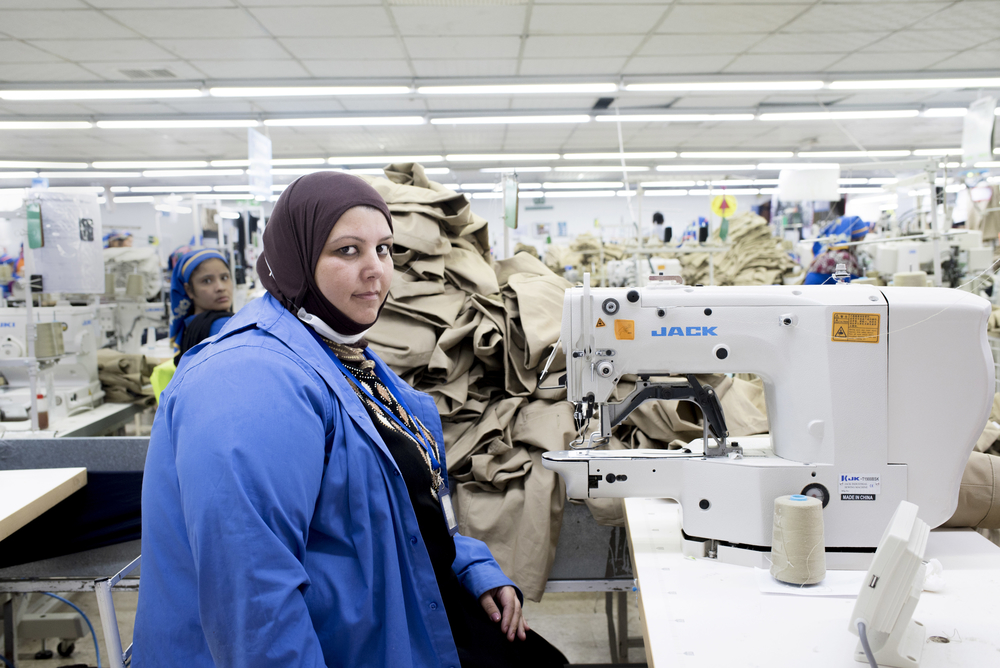 Alisa Reznick/IRIN
Fatma Rajab Sakr, a 32-year-old mother from Damascus, began working in Classic Apparel's factory inside the Al Hassan Industrial Complex in January. She is now able to support her daughter with her income from the factory.

More needs to be done by NGOs to help recruit refugees and convince them they won’t lose benefits or refugee claimant status by working legally, said Kumar. He also cited other intractable issues, like the location of most SEZs far from the cities, camps, and villages where most refugees live, a problem compounded by Jordan’s crippling lack of public transportation.

“As long as the NGOs can find Syrians who are ready to work, Classic is more than ready to take them,” he told IRIN.

John Speakman, who is leading the World Bank’s efforts to develop economic opportunities for Jordanians and Syrian refugees, said his team was “pretty pleased” with the implementation of the Jordan Compact.

“Generally, Jordan’s investment climate is not good. It has even gone backwards over the past four or five years. But we’re seeing progress,” he told IRIN. “We’re trying really hard to make this a win-win proposition for Jordan. There’s a chance this may be transformational.”

But drastic reforms are needed for Jordan to be a better place to do business, and to ensure the Jordan Compact delivers benefits for refugees. Whether Jordan will be able to make these reforms is the pressing question.

"The bad business environment in Jordan is a pre-existing problem. To think we can make this work for Syrians – a disempowered, disenfranchised, fragmented population – when it hasn't worked for Jordanians; that's just nuts," said Sean Yom, an associate professor of political science at Temple University who has tracked Jordan’s economic development for more than a decade.

In the case of the struggle to employ refugees on SEZs, Yom sees a disconnect between the project’s aims and the needs of the people it’s supposed to help.

“Public transport is the lifeblood of the Jordanian economy, and Jordanians say it’s inadequate. The idea that Syrians are going to transport themselves to SEZs an hour away? If Jordanians can’t do it… for Syrians to do it is pure fantasy,” he said.

Yom worries that the compact doesn’t provide sufficient incentives for Jordan to implement the reforms needed to get more people, Jordanian and Syrian alike, participating in a better-functioning economy. But with or without those reforms, he noted, the compact will deliver enough funding to help stabilise Jordan’s economy.

“If or when the Jordan Compact fails, Jordan doesn’t lose that much, because the refugee population is transient,” he said. “For Jordan, this is win-win.”

(TOP PHOTO: Mohammad Amr, 25, is one of only a handful of Syrian refugees working at the Classic Fashion factory in the Al Hassan Industrial Complex in Amman. Alisa Reznick/IRIN)