This article is part of our in-depth coverage. Read more like this...
This reporting is part of a special project that explores the impact of climate change on the food security and livelihoods of small-scale farmers in Kenya, Nigeria, Senegal and Zimbabwe
KIBWEZI/KENYA

It was a modest intervention — a drop in the ocean of global climate finance — yet it has made the difference between profit and loss for a group of businesswomen in southeast Kenya’s Makueni County.

Ever since their cooperative, Huruma Asili, began receiving daily weather updates via mobile phone a year ago, fewer of their sliced mangoes turn an unsellable shade of black when laid out to dry.

The service sprang not from a one-size-fits-all template drawn up by a government ministry or a far-flung aid agency, but from the women’s own considered response to a simple question posed by their peers to the whole neighbourhood: “What do you need to lessen the harm of climate change?”

It’s a bottom-up approach that underpins fledgling local adaptation initiatives in Kenya, one of the largest recipients of climate finance in sub-Saharan Africa. It also paves the way for the country’s 47 counties to gain access to major sources of money, such as the UN’s Green Climate Fund and the Adaptation Fund, which was set up under the Kyoto Protocol of the UN Framework Convention on Climate Change.

Climate change has made the weather not only more dramatic but less predictable, so what the women of Huruma Asili needed to make ends meet was the certainty of a full day’s sunshine.

A few overcast hours are enough to lower the temperature and raise the humidity in their plastic-covered drying sheds to the point where ruinous putrefaction overtakes value-adding desiccation.

Properly cured, the bright yellow mangoes are sold for the equivalent of $50 per kilo to a Japanese exporter based in Nairobi. If discoloured, the fruit is worthless and has to be discarded.

“When the ward committee asked us what we wanted, we told them: Accurate information on the weather so that we know when to dry our mangoes,” said Rehema Madaga, whose association, set up in Makueni County in 2006, also sells dried pumpkins, a variety of vegetables and chickpeas.

Every afternoon now, the Kenya Meteorological Department sends the women a very localised weather forecast in a text message to their mobile phones.

“This has helped us stop losses due to blackening of the mangoes when we dried them and then the weather turned cloudy or rainy,” explained Madaga.

In several counties cross Kenya, neighbourhood climate change planning committees made up of residents of county subdivisions, or wards, are working on the front lines of adaptation to climate change, from initial project conception, through execution, to evaluation and financial oversight.

In Nguu Masumba ward, also in Makueni County, residents told their local committee they needed dams to be built. After the proposals were approved at the county level, two such projects were completed within a few months, just before the start of the rainy season, at a cost of just under $70,000. 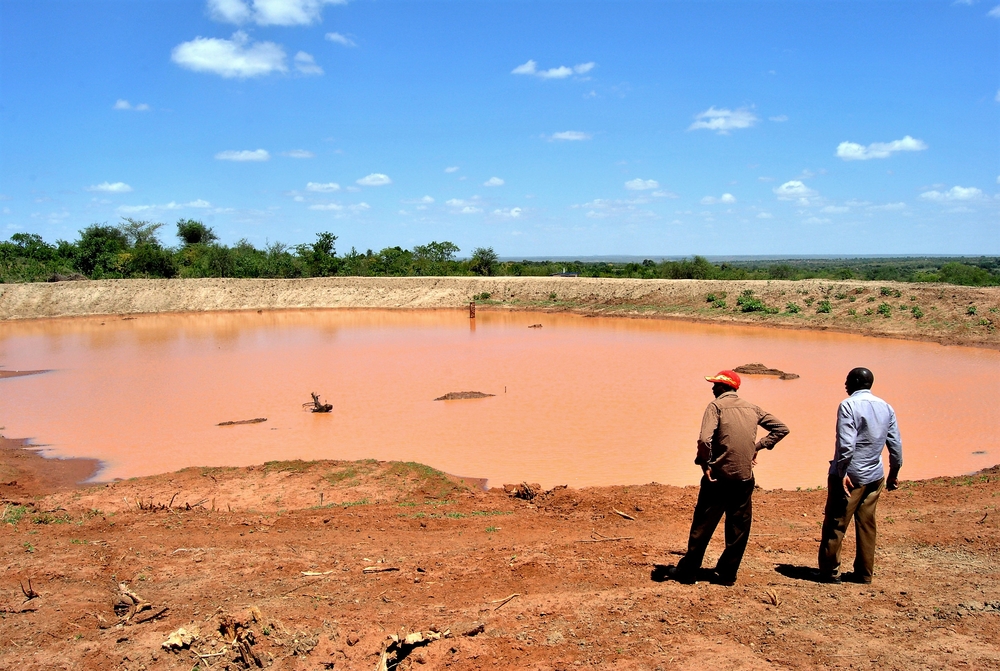 Now, even in the dry season, the river sand that has built up behind the dams retains sufficient moisture for the residents’ animals and to water crops such as maize, beans and peas. Previously, when rains failed, farmers and herders had to travel far to fetch water.

The ward committee’s work did not end with the shortlisting and subsequent approval of specific projects, according to James Mbatha, 49, the elected secretary of the committee in Nguu Masimba.

After overseeing the tendering process to ensure it was above board, “we were also involved in choosing the community members who were to supervise the construction of the dams,” he said. “This ensured that materials were not misappropriated by the contractors or their employees.”

Makueni is one of five counties in Kenya’s arid and semi-arid regions where the financing of climate change adaptation projects by local rather than national administrations is being piloted. These counties cover 29 percent of the country’s total landmass and are home to more than four million people.

The aim is that these local governments’ climate change funds will evolve into what, in the jargon of international climate finance, are termed subnational “implementing/executing entities”, a status that allows them to tap into national and international funding pots, which have strict conditions for disbursements.

These will include the Green Climate Fund, which, when running at full capacity by 2020, will have around $100 billion to spend every year, half of it on adaptation projects (some $10 billion has already been pledged to the fund).

Currently, funding in the five pilot counties comes from the UK’s Department for International Development and is channelled through an adaptation consortium made up of government bodies and various local and international NGOs.

By the end of 2017, the consortium, which also helps counties set up their climate change funds, estimates that some 2.5 million Kenyans will have benefited from adaptation projects conceived and executed using this localised approach.

In Makueni, nine projects were carried out in six of the county’s 30 wards in 2016. This year, all wards are expected to benefit and the county has set aside about $600,000.

Makueni is one of two counties to have passed local legislation committing it to spending between one and two percent of its development budget on adaptation finance. Such laws are prerequisites for receiving many external forms of climate finance. Other counties are set to pass them soon.

According to Richard Munang, who coordinates the UN Environment Programme’s Africa Regional Climate Change Programme, the community-driven approach to adaptation is “critical to mobilising other complementary means of implementation, including technical capacity, indigenous knowledge, business partnerships and collaborations for out-scaling solutions, all critical to complementing financing for optimal delivery of climate interventions.”

“The development that Makueni has done toward sustainably financing climate action will not only help Makueni, but provide valuable lessons for Africa as a region,” said Munang.