After seven hours travelling by canoe up the Coco River, which separates Nicaragua from neighbouring Honduras, the Waspukta settlement appears between the trees, perched on a cliff.

This community of Miskito people, the majority indigenous ethnicity in the Waspam area of Nicaragua’s North Caribbean Coast Autonomous Region, is home to 49 families. Nearly half are refugees from an armed conflict that began two years ago and has left one third of the Miskitos displaced and hundreds dead.

In 1990, the autonomous regions of the north and south Atlantic were ceded to the indigenous peoples of the Caribbean coast as part of negotiations aimed at ending a 10-year civil war.

According to the Nicaraguan constitution, the territory still belongs to the indigenous peoples and cannot be bought or sold. But over the last decade, land has been changing hands illegally, and large numbers of Nicaraguans from the country’s central and Pacific coast regions have arrived in Waspam, seeking a variety of opportunities.

The newcomers are a diverse group: small-time farmers eying better livelihoods, commercial farmers looking for new prospects, timber traders, land dealers. Drug traffickers have also moved into the area, which sits on a key route for the movement of drugs between Colombia and the United States.

Between 2005 and 2014, the number of settler families who moved into just one area of Waspam, Awas Tingni, rose from 44 to 800, according to Lottie Cunningham, president of the Center for Justice and Human Rights of the Atlantic Coast of Nicaragua, or CEJUDHCAN.

The rapid increase in the non-indigenous population is viewed by the Miskitos as an invasion, and it has unleashed a deadly conflict over their territory.

To a large extent, the Miskito people have been disenfranchised by their own leaders. Without consulting local communities, they have been selling off land for an average of $860 for a 0.7-hectare plot.

Much of the land once used by the Miskitos to grow rice, beans, maize, and yuca is now occupied by the settlers, who have also taken over the mines from which the indigenous people used to earn an income by manually extracting gold.

Victor introduced himself to IRIN while leaning against the butt of his AK-47 rifle. “I am responsible for the troops of this community, and we do not only have hunting rifles and makeshift weapons,” he said.

“We got these weapons from the drug traffickers. We have resources, gold mines to pay for them. We struck a deal for them to provide us with weapons. Once we have recovered the mine, we will pay.”

As we canoed downriver to visit one of the Miskito villages devastated by the conflict, Victor indicated with a movement of his chin the area he had chosen to hide their weapons. “If they attack us, we’ll be able to collect them fast,” he said. 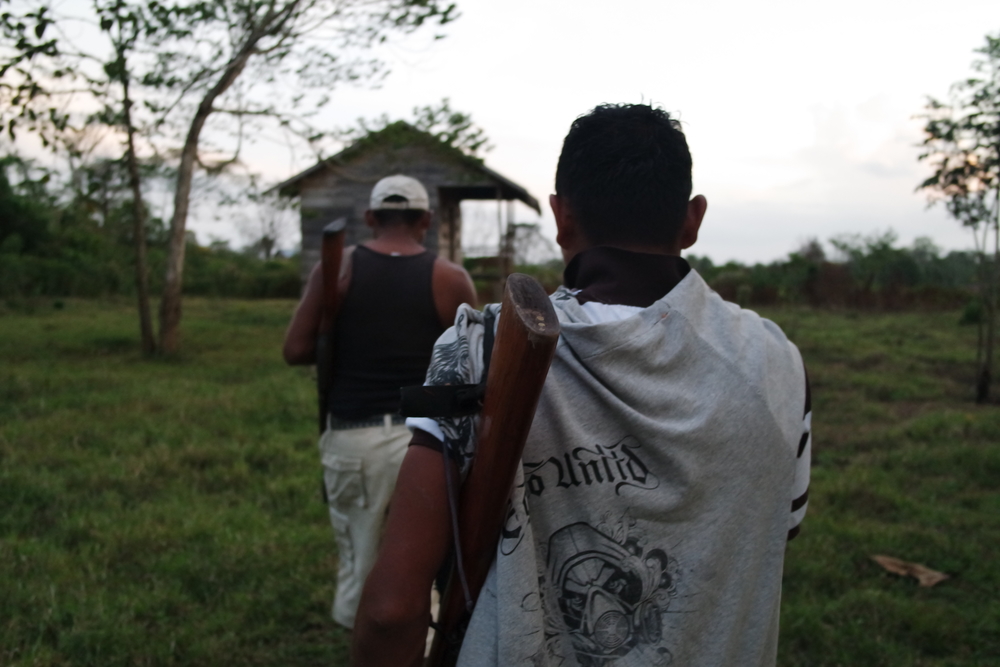 "The people are rising. I don't know when it will explode, but there will be war here," said Lamberto Chow, a Miskito judge who is attempting to use dialogue to settle the land disputes. In the meantime, he’s taking no chances. A shaman who lives on the Honduran side of the river has promised to make him a protective amulet that will “make bullets swerve”.

By some accounts, the war has already started. In September 2015, a group of Miskitos tried to seize back the Santa Rose de Murubila mine, burning down the village and evicting the settlers who were extracting gold and paying taxes to Miskito leaders.

The evictions spread to other settler communities and were accompanied by abductions, beatings, rapes and even beheadings. “People tried to recover the bodies, but were not allowed to. The gangs that came in took possession of their victims’ homes and people were too afraid to go back,” recalled the security chief in one of the affected areas.

A month later, the settlers took revenge by burning the Miskito community of Polo Paiwa to the ground. Its inhabitants fled to other communities along the river, leaving behind the crops and food that would have fed them for half a year.

In Klis Nak, one of the communities hosting those displaced from Polo Paiwa, a mother showed IRIN the scars left by four gunshot wounds on her 19-year-old son’s chest. His 17-year-old brother did not survive the attack. According to another community member, he was “raped with a stick and had his genitals burned before he was skinned alive.” The torture only ended when he was shot in the forehead.

“We share the land with the refugees until the situation is resolved. But the poverty is deep, so we are hungry with them,” said Olopio Maibi, leader of the Waspukta settlement which is also sheltering the displaced. 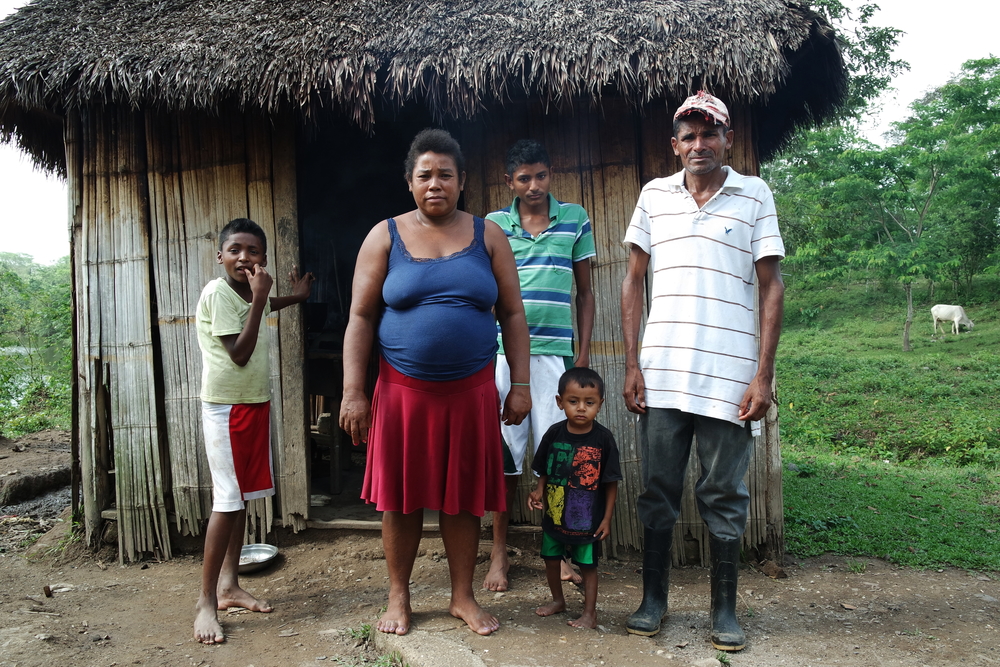 According to Cunningham, since 2015, “the level of conflict has taken on alarming proportions in more than 50 indigenous communities” where people now live “under a permanent state of violence”.

The killings and kidnappings have continued, but, so far in 2016 at least, not on the scale of Polo Paiwa. "We are preparing,” said Victor. “When we get all the weapons, we will enter the territory [occupied by the settlers]."

Pushed off their land, Miskito communities have been edging ever closer to the Coco River, and some are now crossing the river to plant and mine on Honduran territory.

“Our children can die of disease, but not of hunger. Never. If we have to die, we will, but only from bullets,” said Gabriel, a displaced Miskito man who crosses the river every day to extract gold from a beach belonging to Honduran Miskitos.

The Nicaraguan and Honduran Miskitos have long enjoyed friendly relations, but on the day Gabriel spoke to IRIN, he had been given a three-hour deadline to leave the beach.

In this corner of Nicaragua, there are no roads; there is no access to medical assistance, no schools (since teachers fled the violence), and no rule of law. There are also no official figures to establish the number of people affected by the conflict. Bodies of victims are dumped somewhere in the mountains, and both sides have their own estimates of the death toll.

The Inter-American Commission on Human Rights (IACHR), part of the Organization of American States, estimates that more than 3,000 Miskitos have been displaced, while CEJUDHCAN recorded the deaths of 28 Miskitos from the conflict in 2015. There is no record of the number of victims among the settler population. 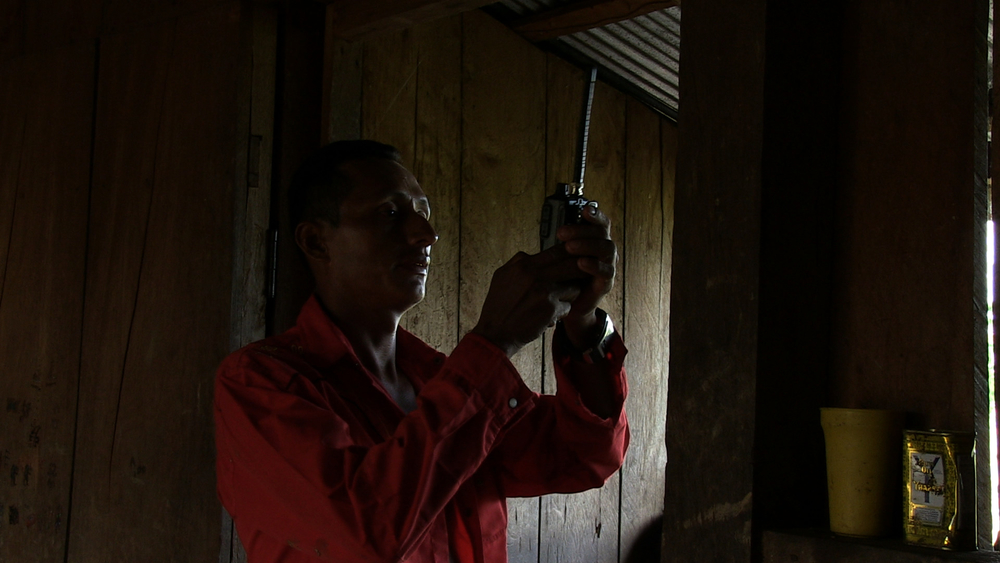 Settlers and Miskitos seem to agree on only one thing: the state has abandoned them, leaving the conflict to fester.

“The government has taken a completely passive stance,” said sociologist Manuel Ortega, who in the 1980s was chief advisor to the presidency and governor of what would later become the Autonomous Region of the South Atlantic.

Government neglect of the troubled region has continued even after an October 2015 injunction by the IACHR requesting that measures be taken to protect 10 indigenous communities from further violence.

In August, the commission decided to extend the injunction to another two communities. The UN’s special rapporteur for the rights of indigenous peoples has also urged the Nicaraguan government to establish a dialogue to find a long-term solution to the conflict that would involve relocating the settlers.

The absence of state involvement and the availability of weapons mean the killings and forced displacements are unlikely to end any time soon. The Miskitos view guns and magic amulets as their only solution, while the settlers are not prepared to abandon what they’ve already invested in their new lives.