Masoud proudly lifts his bedding to reveal the construction of his makeshift bed. He has hammered together four wooden pallets and fitted legs underneath. Poorly padded by a yoga mat covered by two woollen blankets, it seems to radiate heat in the airless June afternoon. But the 34-year-old Syrian chef has a solution for the stifling conditions too.

Outside the three-tent compound he has stitched together for his family of four, he has constructed a sort of summerhouse in the shade of some pine trees: a platform raised on several metal drums and rendered private by a bedsheet. Masoud’s wife, Mezgin, spends her afternoons there cooling off, while four-year-old Mohamed digs holes in the earth with a claw-hammer and elder sister Linda, nine, works on a potted flower garden. Masoud has even built an earthen cooking stove, connected to a chimney on one side and an oven on the other. He fuels it with dead wood foraged from the surrounding pine forest.

This Syrian refugee version of the Swiss Family Robinson is part of a growing narrative in self-reliance at Ritsona, a former Hellenic Air Force radar station about 100 kilometres north of Athens. The facility has been abandoned for decades and, even by rural Greek standards, it is the middle of nowhere.

Three months ago, as borders were reinstated across the Balkans and more than 50,000 refugees who had intended to make their way to northern Europe became stranded in Greece, the government began parcelling them out to abandoned military camps. Some 800 landed in Ritsona. Many have applied for asylum in Greece or relocation elsewhere in Europe, but both processes are likely to take months.

For volunteers and NGOs, as well as the refugees themselves, the emphasis has shifted. Initially, it was about providing anything and everything that was needed. Now, it’s more about helping the refugees fend for themselves, handing out tools and pallets for example.

“For the first month it wasn’t happening at all,” says Ryan DeHane Templeton, an American volunteer with Echo 100 Plus, a Vienna-based charity. “But in the last three weeks it’s grown immensely.” 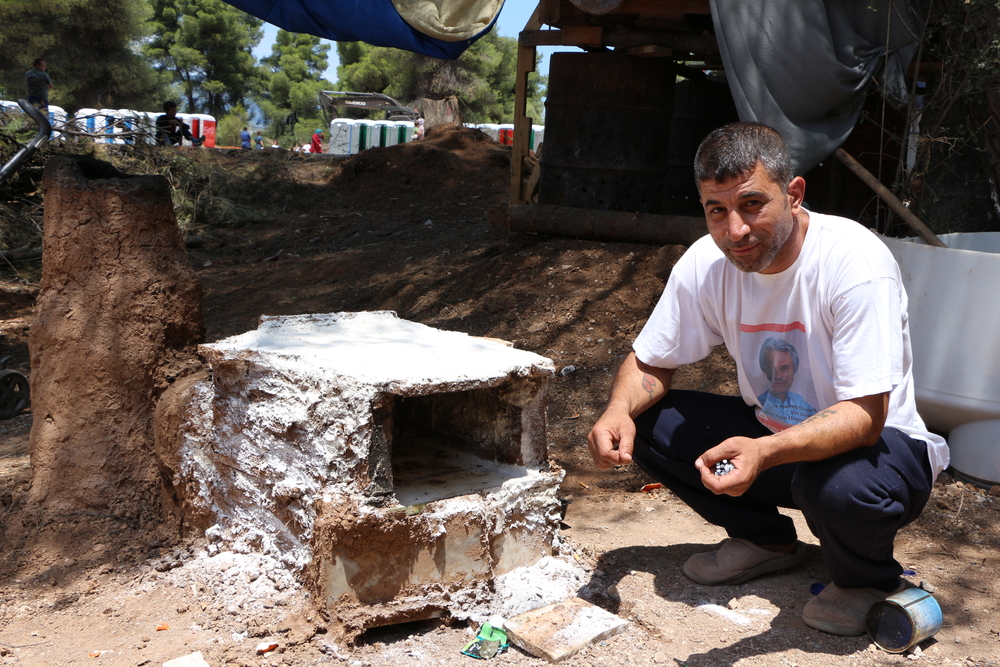 Across a dirt road from Masoud, another Syrian, Shem, has built a two-storey tree house to keep his pregnant young wife cool, draping pine needle-covered branches around it to provide privacy and shade. He is trying to coax rose vines out of four plastic water bottles.

The camp has no running water, and only the storeroom has electricity, yet one of the refugees has managed to install a satellite dish and children now sit around an ancient donated television.

Echo 100 Plus is encouraging the refugees to use their own initiative. “We have a couple of sewing machines and a couple of tailors [who are refugees] living in the camp who are going to start making the clothes that we’re having difficulty finding,” says Templeton. “More conservative clothing is hard for us to find here in Greece. So, for example, they’ll start to produce long skirts for themselves.”

Some of the refugees find a sense of purpose by volunteering as translators and in other capacities for NGOs like Echo 100 Plus. One of the most sought-after translators is 23 year-old Soham Yazidi from Iraqi Kurdistan. She speaks Arabic, Kurdish and English, and finds the work therapeutic – especially as much of it is done in a pair of tents that serve as a Red Cross clinic.

In another effort to try to achieve a semblance of normality in the camp, a Canadian charity, Light House Relief, has fenced off an area for educational activities. “The kids are wanting to go to school and parents are trying to make sure their kids are on time,” says Patti Fink, a volunteer. “That’s part of the intent – to get kids to understand what it’s like to go to school and get into that routine.”

The Greek migration ministry has announced that it will open schools with Arabic- and Dari-speaking teachers in all the camps by September. In the meantime, the children of Ritsona, many of whom have never attended school, are taught punctuality, cleanliness and the ABC song under the shade of two enormous Aleppo pines. 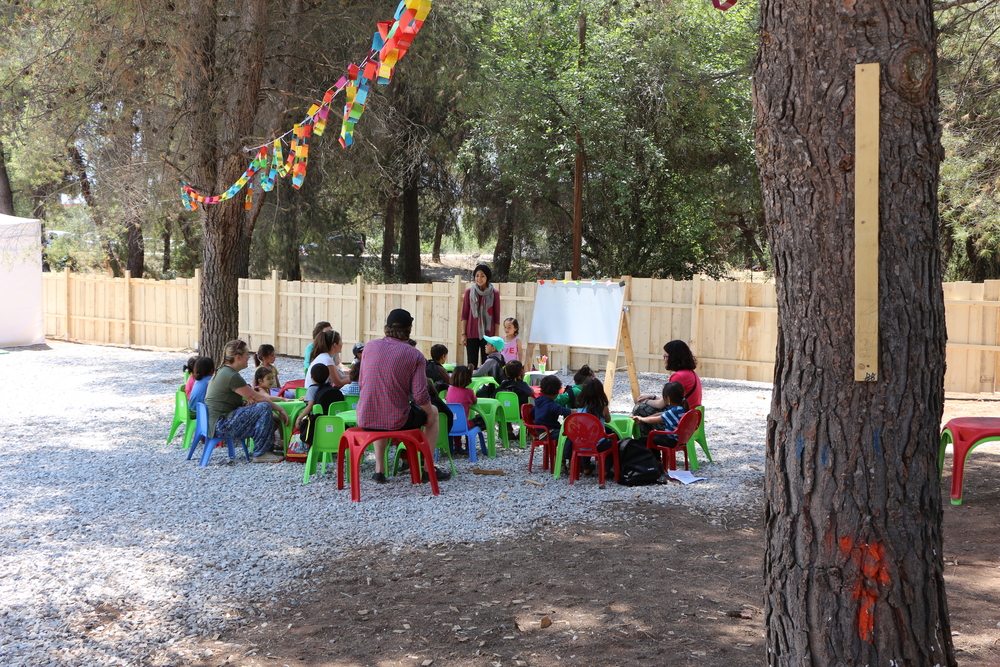 Other improvements are on the way. An air force excavator has prepared a trench for a sewage pipe – in a matter of weeks, Ritsona will have flushing lavatories rather than a bank of portable toilets.

On the outskirts of the camp, four plots of land demarcated with stones are the beginnings of a vegetable garden, currently on hold until irrigation water becomes available.

Even with all this self-empowerment, refugees at the camp are largely cut off from Greek society, a society that many of them will eventually join if their asylum applications are successful.

Some would like to see efforts to integrate the roughly 57,000 refugees currently stranded in Greece go a lot further. Spyridon Galinos, mayor of the island of Lesvos, which received more than half a million of the refugees who passed through Greece last year, wants the European Commission to subsidise a job creation scheme that would allow hundreds or even thousands of refugees to settle on the island permanently.

“The only condition I asked was that a certain number of jobs should be created, half of which would be filled by refugees and half by locals,” he told IRIN, adding that several villages on the island had empty houses where the refugees could stay.

Galinos said such a scheme would serve as a form of compensation for the millions of euros his municipality has paid in water and electricity bills for refugee camps. The European Commission has yet to respond to his proposal and more than 8,000 asylum seekers remain incarcerated on the islands of the east Aegean with no scope for integration. They arrived after the EU-Turkey agreement was signed and must go through a process to determine their eligibility to remain in Greece before they can even begin the asylum procedure.

Another 11,000 were evacuated from informal camps in the border area near Idomeni last month and relocated to hurriedly erected facilities in abandoned industrial sites.

Phoebe Ramsay, an independent volunteer from Canada, describes one of these, set up inside an old tannery in the suburbs of Thessaloniki, as “absolutely filthy. They didn't even sweep the floor before they set up tents. There's scrap metal and debris all around. There's only one tap of (theoretically) drinkable water for 800 people. And this is a good one.”

The more fortunate are those spread through Athens in subsidised rentals and small communities in disused buildings. Not only are they closer to donors, volunteers and charities, but they have the best prospects for some degree of integration, especially as civil society organisations in the capital are starting to launch programmes with that aim in mind. Melissa, an organisation for migrant women in Athens, has developed a crash course in Greek with linguists at the University of the Aegean.

“Its utilitarian Greek,” says Nadina Christopoulou, Melissa’s founder. “We have done focus groups to discover what situational vocabulary is most useful, such as going to a hospital, dealing with children, paying bills… We’d like the seasoned migrants to be the connecting tissue between the refugees and society.”

Melissa is also planning trips to markets and museums, so the refugees can practise using their Greek.

“I think it’s very important for these people to emerge from the camps and start mixing with local society… The key is to forge a path to income-generating activity, where they will be agents of their own learning, not just passive recipients.”