This article is part of our in-depth coverage. Read more like this...
ISTANBUL

The “Grand Bargain”, the “Roundtable on Humanitarian Financing”, the “Global Food Security Cluster” event: meetings and dealings at the inaugural World Humanitarian Summit can seem a long way removed from the day-to-day challenges facing many in the aid world.

Several floors down from the set-piece events, what do those displaying their wares in the exhibition space of the Istanbul convention centre want? What do #ReShapeAid and #ShareHumanity mean for them? What relatively small changes in the aid system would make a world of difference?

NGOs don’t get much tinier than Small Projects Istanbul.

Anna Tuson is busily, if wearily, arranging a table of knitted woollen items on a table. The women behind the table are refugees from Syria, all living now in Sehremini, a neighbourhood of Istanbul that is a way station for those fleeing the war and looking for new lives in Turkey or a route to Europe.

The money from the craft collective goes back to the women, and the principal focus of the charity is on educating their children, finding ways to give young Syrian boys and girls a fresh start, via an education.

For three unpaid full-time volunteers and 15 part-time volunteers, the obvious problem is money. What little they muster comes from crowdfunding, private donations and small events in cafes just to pay the rent and electricity.

“Syrian refugee children have the right to a free education in Turkey so they should go to Turkish state schools, but even a small cost can be prohibitive, like they need to pay for a bus to get to school, a uniform, a book, lunch,” Tuson explains. They even pay one family a small stipend, equivalent to what their 13-year-old boy earned in textile factories six days a week, so he can attend classes instead.

“You have these very rigid guidelines to get funding. Everything has to be a new project,” says Tuson. “We don’t want to start a new project. We’re already doing exactly what we should be doing, really great impactful work: we know that! But it’s an ongoing thing, we’re not doing like ‘oh for three months we’ll go here and implement something and have our project goals and we’re done’, this is something that we mean to be permanent for as long as the Syrian community needs it.

“So what we need is people to pay for the unsexy costs: pay our rent, let our volunteers, the core team members, have a salary. Everyone wants to fund a new project, so we’ve been surviving by our own means.”

For Tuson, trying to write a funding proposal, when she is no specialist and has so much else going on, is a nightmare. The timelines, objectives and metrics required are unrealistic for an NGO that was assisting 30 women four months ago but is now helping 70.

“The people that give the funding want to know: ‘how many people, how old are they, where are they from, what are they doing?’” says Tuson.

These are impossible metrics for Small Projects Istanbul to give. Ages and numbers change dramatically as each new wave of refugees arrives. Others are moving on, to Germany, or want to try at least.

Tugsen Aly is from Standart Grup, a private Turkish company that must be enjoying something of a boom. It specialises in building refugee camps in Turkey and across the border in Syria. Working in a war zone has plenty of difficulties, but most of them you can do nothing about. What could change and what bothers Aly is how slow aid agency projects are.

“We’ve made about 10,000 homes for refugees and about 12 camps up until now,” she tells IRIN. “We are also making clinics, schools, hospitals, mosques: whatever is needed for their wellbeing.”

“The main problem is to find good locations and charities. It is so obvious what they need, but they take a long time to do their decision-making. There are lots of different levels of decision-makers within the charities. It takes so much time.”

The exhibition halls at the WHS aren’t just about those helping the needy. Plenty are here to sell – with good intentions of course. A proliferation in crises has spawned a $20 billion plus humanitarian aid industry.
Many, like Simon Postma, have the title “project manager” but they are also salesmen, trying to break into the potential goldmine of the humanitarian market. 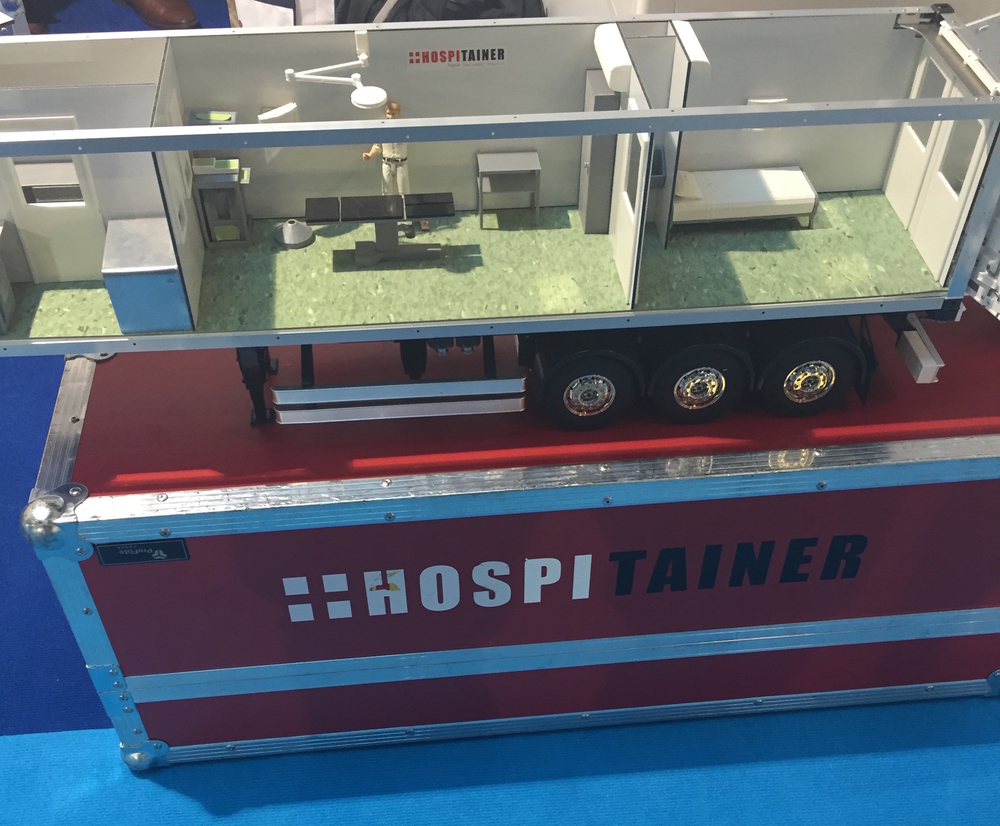 “The people in the field, from the NGO, they said, ‘we really need this hospital, we need it now’. We said, ‘ok we can supply it’, but the procedures were so strict we couldn’t act that quickly.”

Postma’s big fix would be for the system to allow partnerships so companies can build real trust and speed up the process.

“The rules are currently too strict. An NGO cannot partner with a private company because then the private company has an advantage. So the NGOs always want to be independent. But I think there should be a different way to approach it.”

For Benjamin Denef of Maggie Shelter, the focus is giving forcibly displaced people durable solutions in terms of housing, schooling and medical facilities, but he also thinks it’s good that humanitarianism is moving in a more market-oriented direction.

“I really believe in the fact they they need to do things like this to make the humanitarian sphere more efficient, more like a corporation, involving all these bright people and initiatives.”

Further down the hall and a world away is Mike Fawcett from Empathy Action.

“We probably come right from the other end of the spectrum from these big, high-powered ideas,” he tells IRIN, before explaining how his small NGO seeks to transform awareness to empathy and action by exposing people to simulations of real suffering.

Fawcett isn’t the only one peddling simulation. Interactivity, even virtual reality, is big at the exhibition.

You would think in a war-weary world, everyone might have had enough of the bombs, the loss, the pain, but this is also the era of citizen journalists and selfies. Everyone wants to be part of the story, or may at least want to know what it’s like to report on it. At the UNESCO stall, you can do exactly that. Donning a pair of virtual reality goggles, you are immersed 360 degrees on the frontline in Syria with a narrator describing your journalistic mission as you navigate the rubble, the demos and the bombs. 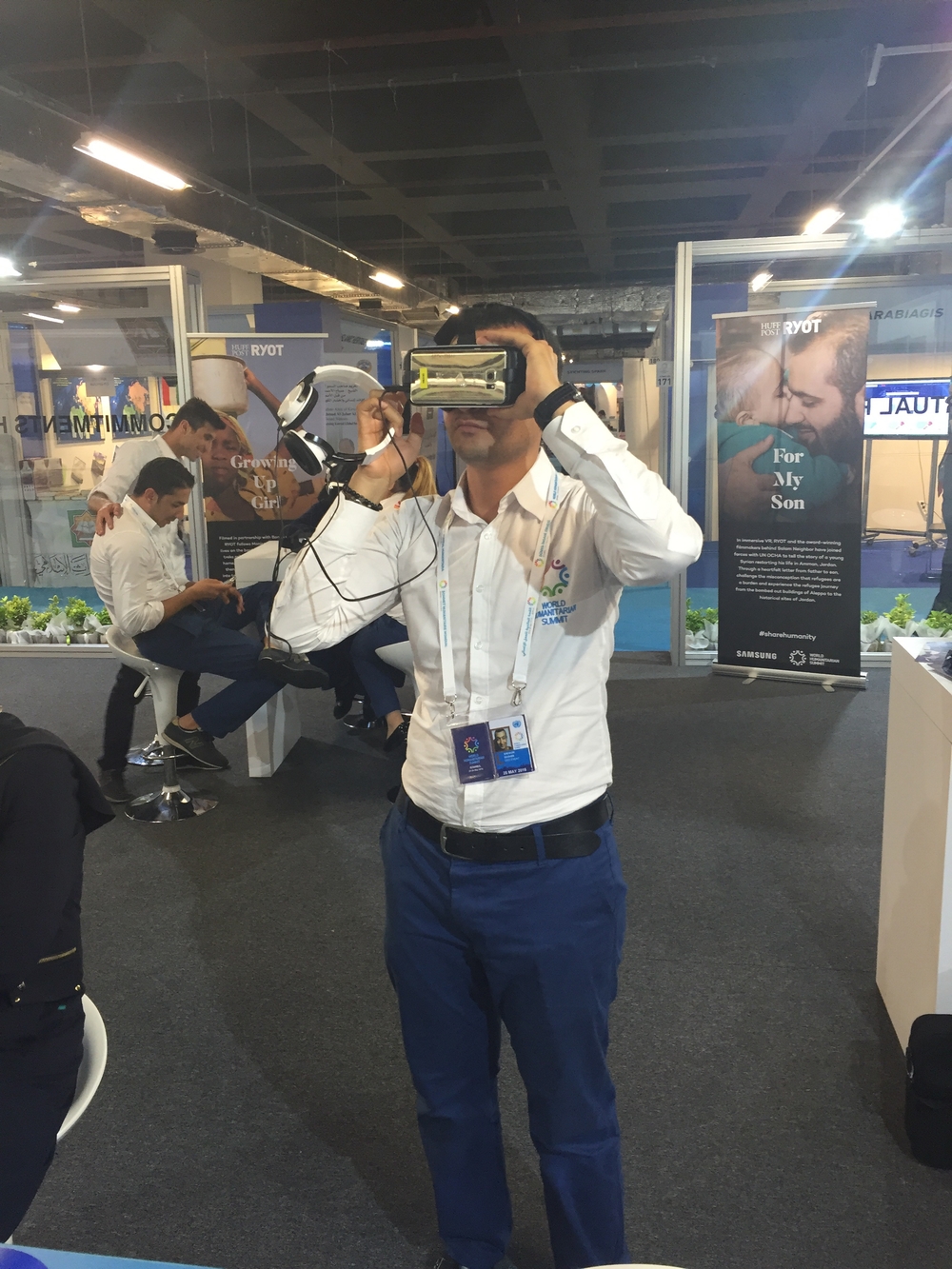 The use of unmanned aerial vehicles to show damage and gather data in disasters and emergencies has exploded in recent years. So there are plenty of drone companies on show too, even a Turkish one, Vestel, which media reports say is testing a new armed model: not exactly the kind of #ReShapeAid the organisers had in mind.

What to take away?

It’s easy to be cynical as you wander past some of the more opportunistic stalls, but it’s also hard to stay cynical too long. This is, after all, a humanitarian summit. Most people are clearly here to do good. And there is plenty of innovation too.

Geoffrey Kateragga of Humanitarian OpenStreetMap says thousands of volunteers from around the world have contributed to more than 12 million edits of their free maps, a vital tool for relief organisations responding to disasters or political crises.

“Let the people on the ground be empowered,” he says, urging the UN and major NGOs to nurture local leadership through training and inventive tools. “It’s about how to bridge that gap, how to work with local communities.”

It’s a common gripe here, but Eilidh Kennedy of Action Against Hunger wishes everyone didn’t rush so quickly to scapegoat the UN.

“It’s more convention to blame the UN. I think there’s a lot wrong with the UN but I also don’t think we reflect enough on ourselves… It’s not as though the UN is the be-all and end-all. ”

Questions abound, but perhaps one above all others. How do you channel all this morass of mostly well-meaning humanity into a system (or an “eco-system”, as the current jargon has it) that works for those most in need?