Captain Jimmy Amolay looked across the river at the charred wreckage of a backhoe sitting in shallow, muddy water. Islamist militants blew up the tractor even though it was being used to dredge the river, which could only benefit the local community.

Confoundingly, the villagers were protecting the culprits in their midst.

Amolay’s Philippine Army unit hadn’t been able to capture a single member of the Bangsamoro Islamic Freedom Fighters (BIFF) since arriving on 5 February to guard the dredging project in Datu Salibo, an impoverished municipality in Maguindanao Province.

“There’s one village where I’d say 95 percent of the men are BIFF,” said Amolay. “In the daytime they’re in plain clothes, but at night they turn into BIFF.”

The ease with which fighters can slip back into society not only underlines the huge challenge the security forces are confronting; it also highlights the potential for a dangerous Islamist escalation should a peace deal to end the 40-year-old conflict be allowed to unravel.

The previous war was fought by local players over grievances particular to Mindanao, but if the peace deal falls apart and the island slips back into conflict, the next phase may look radically different. The BIFF and other armed groups have pledged allegiance to the so-called Islamic State, which has announced its intention to push into Southeast Asia.

“We consider them brothers, but we are not part of them,” Abu Misry Mama, a BIFF spokesman, told IRIN by phone.

Security experts say it’s unlikely that groups in Mindanao are receiving any formal support, but its clear they are drawing inspiration from IS. Some have used IS flags and released videos echoing IS rhetoric. In late March, at its base in Cotabato City, the military displayed items it said it recovered after battles with the BIFF in Datu Salibo, including bomb-making materials, IS propaganda, and instruction manuals on how to construct improvised explosive devices. 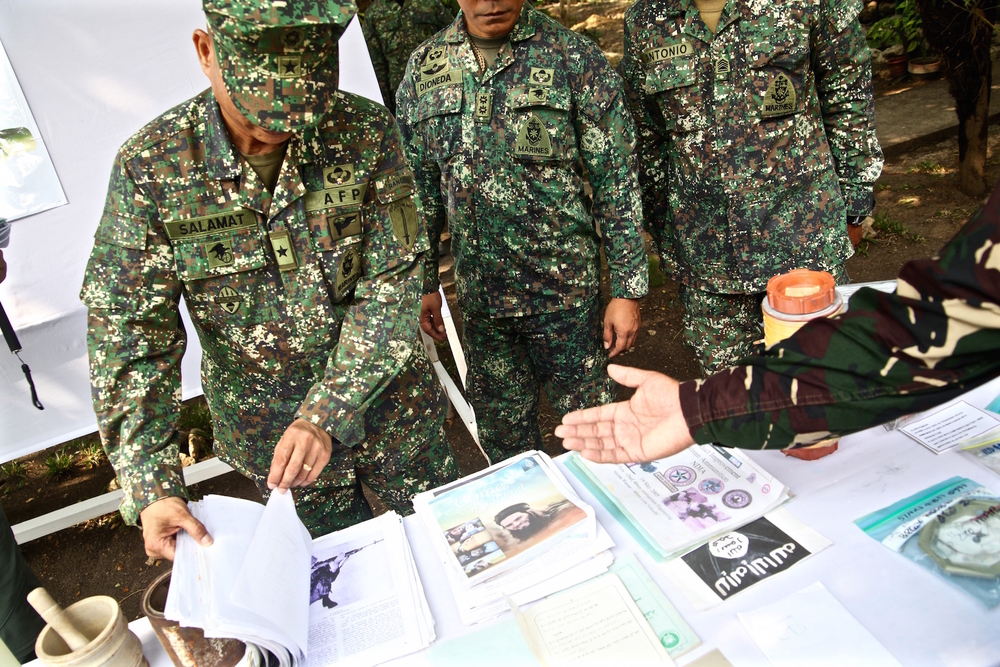 Jared Ferrie/IRIN
Philippines soldiers with IS propaganda, and bomb-making instruction manuals and material and captured from the BIFF

The relationships between groups in Mindanao and Islamist militants overseas may be largely symbolic for the time being, but that’s enough to unnerve negotiators on both sides of the table.

“It’s very important that we finish what is inherently a domestic issue so that we don’t get enmeshed in these international dynamics,” said Miriam Coronel-Ferrer, the government’s lead negotiator.

“Frustrations are toxic,” he said. “When people are hopeless they can choose so many radical activities.”

The latest radical activities BIFF has chosen include demanding money from the local government to allow it to continue dredging a stretch of river that often floods and destroys crops. The project aims to link the main community of Datu Salibo, strung along a narrow strip of asphalt, to nearby villages that have no existing road access.

When officials refused to pay, the group began blowing up heavy equipment and planting explosives near the dredging site. That’s when the government sent the military in.

The BIFF spokesman, Mama, denied that his group had attempted to extort funds, but his explanation for attacking the project made little sense. He repeatedly said the government had neglected to guarantee that the community would have “road right of way”, even though soil scooped from the riverbed is being used to build a road for villagers to use.

Soldiers are now camped next to tanks and armoured vehicles along the river, and they’ve been fighting off attacks since they arrived. Civilians are paying the price. The government said almost 14,000 people remained displaced in Datu Salibo alone, and thousands more across five neighbouring municipalities.

“We were having breakfast and a mortar hit the village. We all dropped to the floor,” said Taya Quezon as she chopped vegetables next to a tiny makeshift shelter about a kilometre away from her home, where she and her eight children sleep.

“We waited for a break in the gunfight, then we moved.” 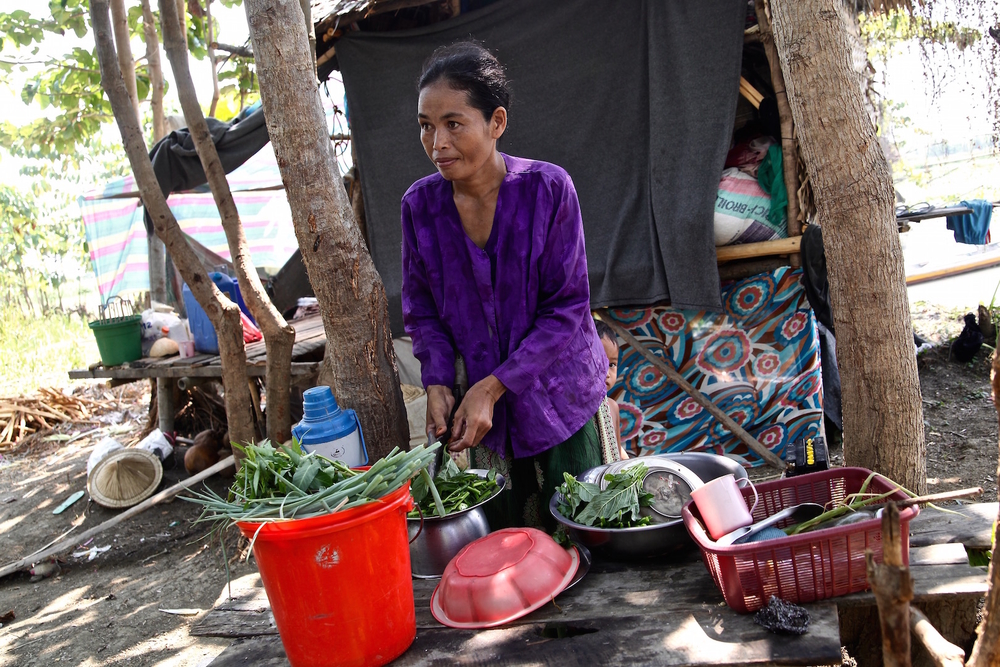 Even though they support the dredging project, and there’s no argument that the violence began after BIFF attacked it, Quezon and other locals said they blamed the army.

It was unclear if those displaced by the fighting felt they could speak freely, since BIFF members might be their neighbours or even their relatives. Their distrust is also based on generations of government marginalisation and military abuse.

When asked where the BIFF fighters were hiding out, Amolay swept his arm in a 180-degree arc across cornfields to villages nestled in stands of palm trees hundreds of meters away.

“We can’t search the houses, because it’s illegal,” the army captain said, sweat dripping down his face in the blistering mid-day heat.

That’s a relatively new attitude, and it marks a shift in the Philippine Armed Forces’ approach to counterinsurgency. No more kicking down doors, abducting civilians and the like. The new order of the day is winning hearts and minds by providing security and development.

“We realised that what we were doing wasn’t working, so we had to change,” said Captain Joann Petinglay, the military’s regional spokeswoman. “Because if we keep doing operations and then there is collateral damage, we will just breed a new set of rebels.” 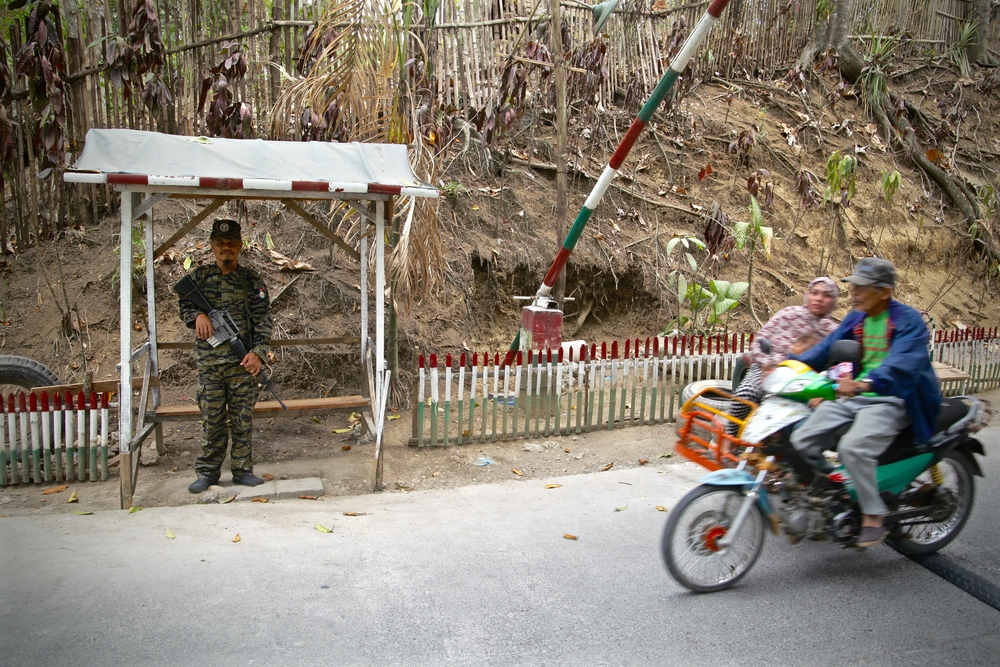 Time will tell if the foundation of the peace deal is strong enough to withstand the slow grind of Philippine politics. But time may also be running out.

A recent report by the UN’s emergency aid coordination body, OCHA, noted that 148,000 people were displaced by military action against the BIFF last year. The cycle continued into 2016. As of the end of March, more than 30,000 remained displaced in Datu Salibo and nearby municipalities, and they were not receiving adequate assistance.

The report warned that the lack of support for displaced people, combined with disillusionment due to setbacks in the peace process, may “radicalise” youth. “The BIFF may be gaining support from these communities as they become more vulnerable with fewer options,” said OCHA.

The BIFF is just one of a growing number of militant groups in Mindanao, which are taking cues from IS and other Islamist extremists around the world. The longer the peace is delayed, the more time they have to recruit members and coordinate with one another.

In the meantime, IS has been encouraging its ideological allies in Mindanao. A Saudi Arabian anti-IS cleric was shot and wounded following a lecture in Zamboanga City after IS called for his assassination in the February edition of its magazine, Daqib. In April, IS used its al-Naba newspaper to claim that almost 100 Philippine soldiers had been killed since October and 68 aircraft destroyed, according to SITE, an organisation that monitors militant groups.

For the time being, the connections between IS and Mindanao militants appear to be mostly rhetorical, but that may change unless the next government of the Philippines gets the peace process back on track. If it doesn’t, it will face the terrifying possibility that the conflict playing out right now in a cornfield in a remote corner of Mindanao could have global implications.

Photos by Jared Ferrie/IRIN. Banner photo: Philippine soldiers look at a backhoe that was blown up by Islamic militants in Datu Salibo