It’s busy times for the vaccine industry – a new vaccine against dengue fever has been deployed in the Philippines, research for a vaccine against Zika virus is gaining steam (although questions remain over the threat it poses), the Ebola outbreak refuses to go away, and a yellow fever outbreak in Angola has exposed an alarming lack of stockpiles.

Against this backdrop, the biggest-ever effort in human immunisation might finally be reaching the beginning of the end. Wild polio, once crippling hundreds of thousands a year, is found now in only two countries – Afghanistan and Pakistan. There have been just nine reported cases so far in 2016.

If polio were in full retreat in 2017, it would mark 40 years since the last natural case of smallpox – the first disease to be completely wiped out in human history, in 1977.

The multi-agency polio eradication programme led by the WHO since 1988 shows that the road to eradicating any disease is long and expensive, even one with relatively simple characteristics (unlike a number of other diseases on the global agenda, polio can only survive in humans; there’s no reservoir in animals or insects). The Polio Eradication Initiative has a budget of more than $1 billion per year.

The research and development stages of any drug or vaccine take years, but that’s only one ingredient. Public education and mobilisation, funding, and, inevitably, tackling anti-vaccine suspicion and rumours, have all played their part in the twists and turns of the polio campaign. The same will surely be true of any future eradication programme.

The next steps of the anti-polio drive require a synchronised switch in the type of vaccine, due between now and 1 May in 155 countries, and then, in the years to follow, a gradual transition to injectable vaccines to replace the oral drops so many countries are familiar with.

Until this year, the most common oral vaccine protected against all three types of polio. Since type two is now eradicated in the wild, the new version of the vaccine only protects against types one and three.

Some surprising data is a factor behind this move.

While the number of naturally-acquired cases of polio last year were 74, the total number was 106. How?

In a tiny minority of cases – the WHO suggests it’s a 2.7 million to one chance – the oral polio vaccine backfires and causes paralysis: the signature symptom of polio.

Given the right circumstances, both in the patient’s stomach and an unhygienic environment, the polio virus can further survive in faeces and be transmitted to others. This, circulating vaccine-derived polio virus (cVDPV) is most commonly a variant of type two, so it makes sense to remove the pathogen from the vaccine now if it’s not present in the wild.

In 2015, 32 cVDPV cases were reported from Madagascar, Laos, Guinea, Myanmar, Nigeria and Ukraine.

Therefore, the old oral polio vaccine was in fact the cause of about a third of cases of polio-related paralysis last year. Governments accept the rare incidents of vaccine-derived polio as an acceptable price to pay along the road to worldwide eradication. Using only the new bivalent (two-pronged) vaccine should reduce this unintended consequence significantly, while concentrating firepower on the remaining two types. Developed countries now tend to use the injectable polio vaccine, which carries no risk of vaccine-derived polio. The rest of the world should also graduate to the injectable model if the frontline battle against polio can be won by the oral vaccine. 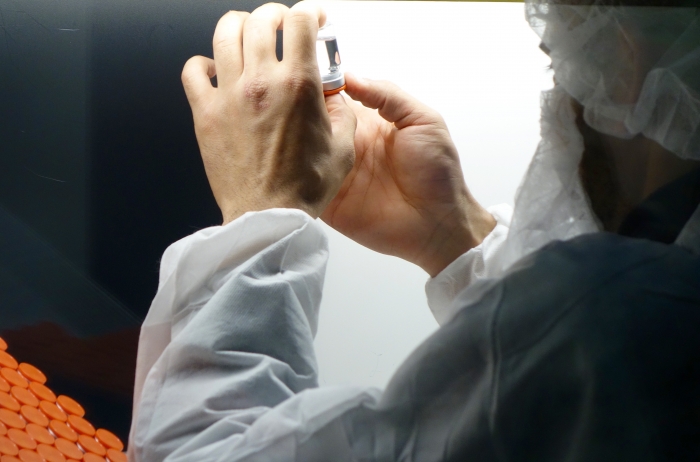 Ben Parker/IRIN
A Sanofi Pasteur employee visually checks a vial of vaccine. Manual and automated quality control is a significant part of the vaccine manufacturing process.

Vaccine controversies, unfounded in science, have surfaced in Europe and the United States in recent years. There is no proof of a link between autism and vaccines, and a dropoff in vaccination rates has caused an upswing in cases of measles. Such scares and debates have always accompanied vaccines and are inevitable part of the public conversation, according to Sanofi Pasteur spokesman Alain Bernal.

Much of the recent media hype involving vaccines has centred on the Zika virus, which has exploded in the Americas this year and has been categorised as a public health emergency of international concern by the World Health Organization.

Sanofi Pasteur head of global research, Nick Jackson, told IRIN that in addition to being a major producer of polio and other vaccines it is among a number of bodies moving towards early-stage “wet experiments” on Zika.

For Zika, there is a particular lack of data and research on the virus, its mosquito hosts and means of transmission. There’s also debate about the normal incidence of various congenital and neurological conditions that have so far been linked to it. Building baseline data will be critical both for researchers and for subsequent public confidence in any vaccine. A recent review of expert opinion by Scientific American explores a range of risks and complicating factors, all suggesting a quick win in vaccine research unlikely.

One of the conditions that may be linked to Zika in adults is a severe neurological disorder called Guillain-Barré syndrome (GBS). “What is tricky is to be able to measure the level of GBS without vaccination… The background level exists naturally. It’s very important for a vaccine producer to demonstrate the level of these events before the vaccination, so that after the vaccination people don’t blame the vaccine,” Bernal told IRIN.

Pressure for Zika treatment and prevention is an acute international priority according to the WHO – and the outbreak’s development in the Americas has triggered the early promise of US cash and research resources. At a recent consultation in the US, researchers, drug company officials, medical journals and public health officials compared notes. “Ebola’s scary because we know what it can do. Zika’s scary because we don’t know yet what it can do,” said Jackson.

[Sanofi Pasteur provided travel expenses for IRIN's visit to its facilities in Lyon.]