Isaac Mutisya stands next to a grave, a simple cement slab shaded by a gum tree on the family farm in Kitui, eastern Kenya.

“This is where I buried my daughter; the one who always brought happiness and joy to this family,” said the soft-spoken high school maths teacher.

Risper Mutisya died a year ago almost to the day. She was one of 142 students killed when the Somali militant group al-Shabab stormed Garissa University College in northeastern Kenya on 2 April. The attack and subsequent siege lasted more than 10 hours.

Risper, aged 24, managed to survive the initial gun and grenade assault that began in the early morning. But then the militants, believed to be five heavily armed men, started hunting for the students who were hiding.

Helen Titus, a third-year student of education, had taken shelter in the same dorm room as Risper and a group of other young women. But there were bars on the windows, no fire escape, and they were trapped.

“The attackers convinced us to come out of our rooms, [that] they were not going to kill us.” said Titus. The students were ushered to the ground floor, a tiled general-purpose area. “They told us to line up, and that was the last time I saw her.”

Titus remembers in those terrifying moments the militants assured them that Islam did not permit the killing of women. Instead, “they separated the boys from us and started killing the boys.” News reports said they had focused on executing Christians.

“After killing the boys, they started giving us a lecture. They were saying they wanted KDF [the Kenya Defence Force] out of Somalia. They said they were going to give us a chance to speak to our parents and for our parents to call the president and convince him to withdraw the soldiers from Somalia.”

But that didn’t happen. After warning everyone not to move, “they went up to other rooms and killed more students. One hour later, they came back for us”. The gunmen opened fire. Titus kept her face down and played dead. Although nicked by a bullet, it was a flesh wound, and she remained motionless.

The day of the attack, Isaac Mutisya had planned to M-Pesa (a phone-based money transfer) Risper the bus fare so she could spend the Easter break with the family. When he heard news of the assault, he began to frantically call her number. “The telephone rang, but there was no answer. Nobody responded. It rang until around 5pm on the same day when it went off completely.”

“The loss feeling in my heart is weighing me down,” said Isaac. “Up until today, I dream about her almost every night. It has not been an easy situation.”

The Kenyan government has been widely condemned for its response to the attack. The elite anti-terror RECCE police unit was mobilised, but there was seemingly no helicopter available to fly them the 380 kilometers to Garissa, which borders Somalia. They were forced to go by road, a journey of seven hours. 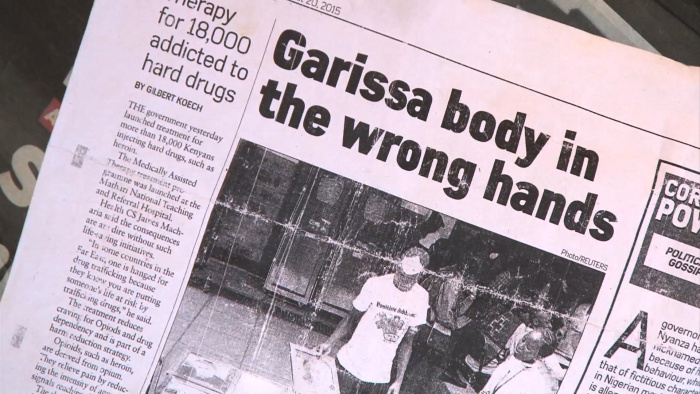 There was confusion over the coordination of the security forces at the scene. Worse still, the attack may well have been prevented: credible intelligence reports warning of an impending raid on universities had been ignored.

Where is my daughter?

Risper was a bright second-year business management student. Titus, who had shared a room with her for a year, said she was “very serious with her studies” and had talked about specialising in accounting.

“I had so much hope in her,” said Isaac, a successful farmer with a solid home and respectable land holding. Risper was the Mutisyas’ second-to-last born, and was adored.

The loss of a child is bad enough, but what happened next magnified the family’s grief.

Risper’s body was airlifted to Nairobi, but then disappeared. She should have been kept at Chiromo Mortuary, a University of Nairobi-owned facility, along with the remains of the other students. But the Mutisiyas could not trace her.

Isaac made several trips to the mortuary – checking and re-checking the gradually decomposing bodies. As the number of unclaimed corpses fell, to three, then two, he began to hope that, somehow, maybe, Risper was still alive. One student had emerged from hiding five days after the attack, why not Risper? The DNA test on the last remaining cadaver was negative – had the authorities made a mistake in reporting her as dead?

But then, finally, realisation dawned. Risper’s second name – Kasyoka – was the surname of a young woman who had already been buried. A DNA test was organised for the parents and it was a match for the unclaimed corpse in the morgue. There had been a tragic mix-up over the name and fingerprints of the two students.

“The other family was ordered to exhume the body. The scene at the gravesite was very traumatising,” said Isaac. “I could not hold myself. I felt like falling and dying.”

A second DNA test on the disinterred body confirmed it was Risper. 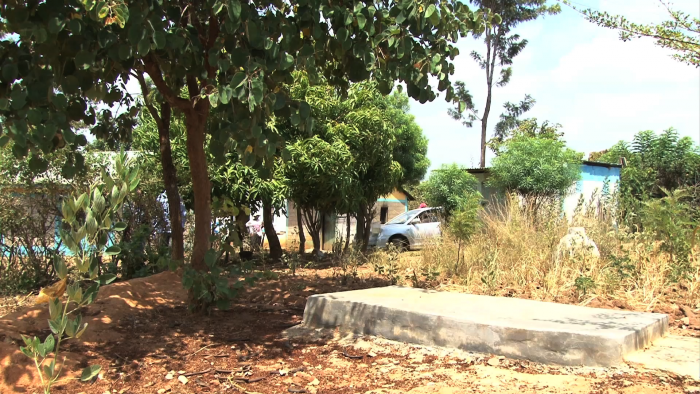 “I felt relieved to some extent when I got the body of my daughter,” said Isaac. “But the loss in my heart is weighing me down... I miss her.”

The gunmen were all killed at Garissa. But, a year later, five additional suspects have been charged in connection with the raid – including a Tanzanian national discovered hiding within the campus, and a university security guard found taking photographs on his phone of the carnage. The suspects deny any involvement, and the trial is continuing.

The university re-opened in December, and there will be a fresh intake of students at the start of the new academic year in September 2016. The government hopes that the worst is over.

“Since the Garissa attack the government has made specific efforts not only just in Garissa but in most areas prone to terrorism,” said interior ministry spokesman Mwenda Njoka. “One of the key things that was done in Garissa was [the] establishment of a police post within the university, and administratively there were changes in the entire security sector within the region.”

But there has been no public inquiry over what went wrong, which has not helped public confidence. Kenyan students don’t appear to feel any safer.

Ten days after Garissa, a student perished in a stampede at Nairobi University when a power transformer blew outside the hostels.

In November, administrators at Strathmore University in Nairobi failed to announce a mock security drill in advance. The shot fired in the air to begin the simulation triggered mayhem. A staff member died.

And then, in March, a disturbance at Kenyatta University in Nairobi led to a stampede, with panicked learners jumping out of third-floor windows. At least 38 people were injured.

Although Garissa has re-opened and the attack has, to some extent at least, brought people together, security expert Richard Tuta warned that the policy of the Kenyan government towards Somalia hasn’t changed.

Without a settlement in Somalia, “the attacks in northeastern Kenya and in the country won’t stop; they will continue,” he added.