“People are more important than ruins.”

So says Hassan Ahmed, a former resident of Palmyra, which the Syrian army took last week after 10 months under the control of the so-called Islamic State group.

Ahmed’s plea to IRIN is heartfelt: “I want you to convey to international organisations and institutions to care about the people of Palmyra who lost their homes, not just about the antiquities.”

Ahmed is one of thousands of residents who fled the central Syrian city, famed for its Greco-Roman era ruins, after IS seized control in May last year, forcing locals to adhere to their extreme doctrines or face public execution. Most of the city’s 50,000 residents (according to a 2004 count) found themselves among Syria’s estimated 6.6 million internally displaced people (IDPs), often forgotten in the country’s ongoing civil conflict.

Now that the city has been freed, Ahmed longs to return but is anxious about what might be left of his house. He becomes animated when describing its modest architectural details, shaping outlines lovingly with his hands.

But Palmyra has been ravaged by fierce fighting – first when IS militants drove out government forces last year, and again during the Syrian army’s offensive to retake the city in late March. Russian warplanes backed the army in its onslaught and bombarded Palmyra with airstrikes, the resultant destruction from which has yet to be revealed.

“Most people in Palmyra are very poor and I just don’t know how they will be able to repair their homes,” Ahmed said, adding that he hoped international attention would soon shift from Palmyra’s historic ruins to the ruined lives and lost homes of its residents.

And the destruction is not yet over. Teams of bomb-disposal experts are still carrying out controlled explosions of the hundreds of IEDs that IS left in properties and premises across the city. The head of the information department in the Syrian army, General Samir Suleiman, said most of the booby traps were so complex and rigged up in such unusual places that they couldn’t be deactivated and had to be detonated instead.

On the outskirts of a Homs district decimated by months of fighting in 2012, families from Palmyra live in single rooms in a school building that has been turned into a makeshift camp by the Syrian Arab Red Crescent.

Usama, 50, had been imprisoned by IS for seven months. He finally managed to flee in a minibus crammed with other escapees. Men, women and children had to stand in the vehicle, shoulder-to-shoulder, as it lurched across the arid desert terrain. Usama tracked his wife and seven children down to the camp, where they had survived a harsh winter by taping plastic bags across the windows and huddling under blankets. 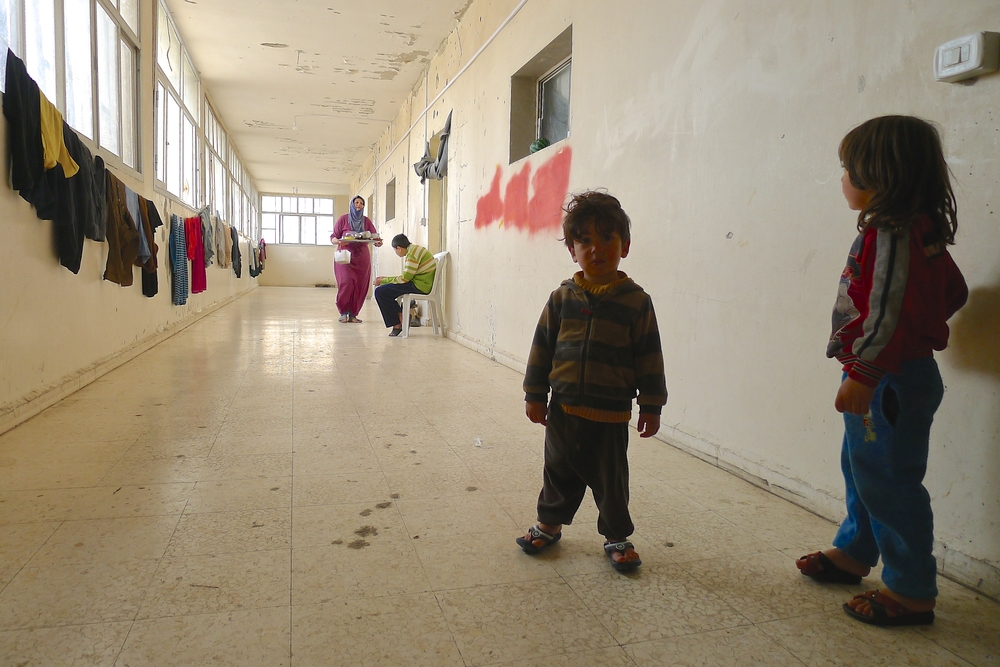 Escaping with just the clothes they wore, the Palmyra IDPs have almost nothing – their few possessions packed into cardboard boxes that serve as furniture in bleak rooms peeling with damp. Most are completely reliant on aid.

Traumatised from witnessing corporal and capital punishment – hands cut off for smoking, hundreds executed for loyalty to the government of President Bashar al-Assad or his army and their bodies left to rot in the streets – Usama urged the European Union to recognise Palmyra’s suffering and offer support.

His weather-beaten face was filled with terror as he recalled the long months of hell. Like most former residents, he refused to be photographed or give his surname.

Those who have lived under IS know what fear really is, and most Palmyra families had relatives killed during IS’s brutal reign over the city. They shared appalling stories of loss and barbarity. The hysterical voice of Badria Hussain, 62, rose above the rest in the Homs school. “I have to tell my story. Please, let me speak!” she cried.

“They killed my daughter just for refusing to wear the niqab [full-face veil]. But they didn’t tell me for a month, and watched me come every day to the wedding hall they turned into a prison, trying anything to get her released.”

Hussain was eventually handed an IS court document detailing the reasons for her daughter’s execution – mocking IS and refusing to wear the niqab. She carries the document, carefully folded, in her purse. It is all she has to remember her daughter.

“She refused to repent, so they killed her,” she wailed. “And my cousin was an army officer so they beheaded him, cut up his body and scattered the pieces on the ground.” Grief has given way to hysterical disbelief. “They slaughtered nurses because they worked in the government hospital and killed whole families of army officers,” she said. “I hope no one ever has to see what we have seen.”

Ahmed said he couldn’t begin to imagine how many people had been killed. “I watched them behead and shoot 40 people just on the first day,” he said. “In the end, I think there were only around 1,000 people still living there. So many had run away, or been executed.”

Countless others remain missing. Many of the young children, living with grandparents or distant relatives in the camp, do not know if their parents are alive or dead.

Hussain said she feared for family members who couldn’t escape, including another daughter and six grandchildren. “My daughter couldn’t leave because she has a disabled son. But she was terrified that Daesh [the Arabic term for IS] would take her oldest boys,” she said. “They were seizing any boys over 10 years old and training them to fight.”

Whatever loss and destruction awaits, the IDPs were ecstatic at the prospect of returning home – once the Syrian army has cleared the city of IEDs – and full of praise for the government forces.

Palmyra had been an Assad stronghold long before its capture by IS and its recapture has been both a military and public relations victory for the embattled Syrian government.

“God gave power to our army and the Russian alliance who helped us take Palmyra back from Daesh,” said Usama.

For many though, any sense of jubilation about the release of Palmyra is tempered by other horrors.

Reem, who escaped Palmyra with her sisters on foot, walking for two days through the desert, had just received the news that her father and brother were both executed last month for refusing to join IS. Somehow, the 24-year-old still found room for hope. “I hate the people who killed my family, but now I can finally be optimistic about the future.”