Before war ravaged Yemen, the country’s black citizens occupied the lowest rung on the societal ladder. Poorer than the poorest of other Yemenis, the group, usually called the Akhdam (servants) prefer to be referred to as Muhamasheen (marginalised ones), and work as street sweepers, rubbish collectors, and panhandlers.

When the war began, they were among the first and hardest hit. Living in slums of tin, tarpaulin, or cardboard, they were especially vulnerable to fighting and airstrikes. And when they took flight, they lacked both the wealth to cushion the blow and the connections others had to help them find shelter.

A year into Yemen’s conflict, more than 6,200 people have been killed – and that’s just what the country’s decimated health system can count. Another 2.5 million people have been displaced by the violence, and 320,000 children under five are at risk of severe malnutrition.

The war, in a macabre way, has levelled the playing field. But it’s a race to the bottom. Almost all Yemenis have now been hit hard by the conflict and the humanitarian catastrophe it has set off. More and more different groups of Yemenis have joined the Muhamasheen on the bottom rung.

“At the beginning it was a clear distinction [between the Muhamasheen and other Yemenis], but now everyone is extremely affected,” Buthaina al-Iryani, UNICEF’s head of social policy in Yemen, told IRIN.

There are thought to be roughly one million Muhamasheen in Yemen, mostly concentrated in Sana'a and Taiz provinces. Like the vast majority of Yemenis, they speak Arabic and are Muslim. Myth says they are descendants of a defeated Ethiopian army sent into exile after their defeat by Muslim rulers 1,000 years ago, but no one really knows for sure.

With a ceasefire announced for 10 April and a new round of peace talks set for 18 April, the plight of the Muhamasheen and other increasingly marginalised groups comes into sharper focus. How has Yemeni society been torn apart by the conflict and what sort of country will emerge when the dust finally settles?

Cooking breakfast on an open fire, Amat al-Rahman, a member of the Muhamasheen community in Sana’a, told IRIN that the war had left her family even more destitute than before.

“Two years ago my husband promised to build me a kitchen,” she said. But the economy has ground to a halt, and now he can’t even find enough construction work to feed the family.

“We hardly get enough food from begging,” she said.

While the Muhamasheen are still extremely poor, and UNICEF has targeted them for special aid, they are by no means the only Yemenis now struggling to find enough to eat.

The World Food Programme warned this week that nearly half of Yemen’s 22 provinces are on the verge of famine, and more than 13 million people need food aid. 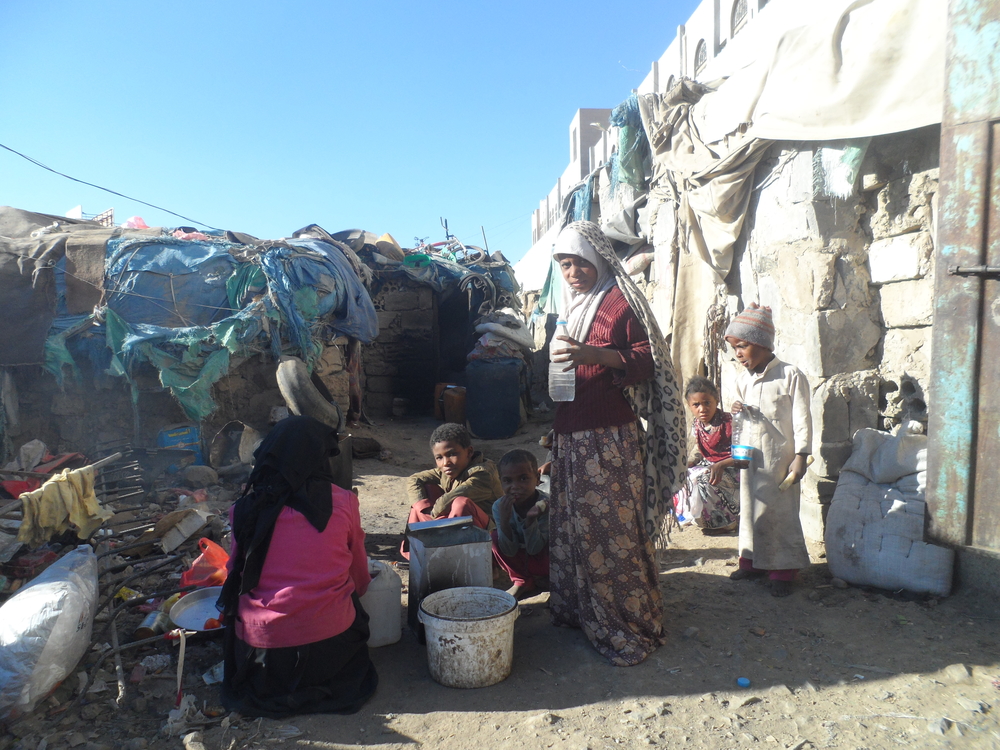 Nasser al-Sakkaf/IRIN
With less work to go around, life has become more difficult for Sana'a's Muhamasheen

Hisham al-Omeisy, a Sana’a based political analyst, said he’s seen Muhamasheen fighting with other Yemenis for the best begging spots on street corners. It’s a new sight in the capital, and a sign of the desperation the war has wrought.

“It is heartbreaking when you see them fighting for a piece of bread,” al-Omeisy told IRIN.

Forced to live together

When the war erupted, many Muhamasheen struggled to find their feet because they didn't own property or have home villages to return to. Without the tribal networks to fall back on, they were some of the first to head to camps for the internally displaced.

But now, UNICEF’s al-Iryani says many others have had to join them, as the tribal support networks have broken down for other groups of Yemenis too, “because of the extreme poverty.”

In al-Shimayateen, some 70 kilometres from the devastated city of Taiz, more than 300 people – Muhamasheen and other Yemenis – are living together in a school that has been turned into a camp for IDPs. For others to live in such proximity with Muhamasheen is a rarity in Yemeni society.

For Maher al-Awli, a 33-year-old Muhamasheen man, the classroom is actually a step up in terms of accommodation. It has solid walls and he has a roof over his head after all.

“I used to live with my family and that of my two brothers in the same hut… but now we have a room,” he told IRIN. “So this is a better place for us.”

They’ve used desks to divide their classroom amongst the three families, 14 people in total. The school’s stairwells and hallways have been turned into makeshift kitchens.

But the close living quarters hasn’t necessarily changed social attitudes. Za’afaran al-Omdah, a Muhamasheen woman in her 50s, said she doesn’t interact with her neighbours.

“Even if all of us are living in the same camp, there are clear indications of discrimination and that they hate us.”

Indeed, several residents of the school told IRIN the Muhamasheen were “dirty.”

But outside in the dusty schoolyard, children of all colours kicked a football around together. 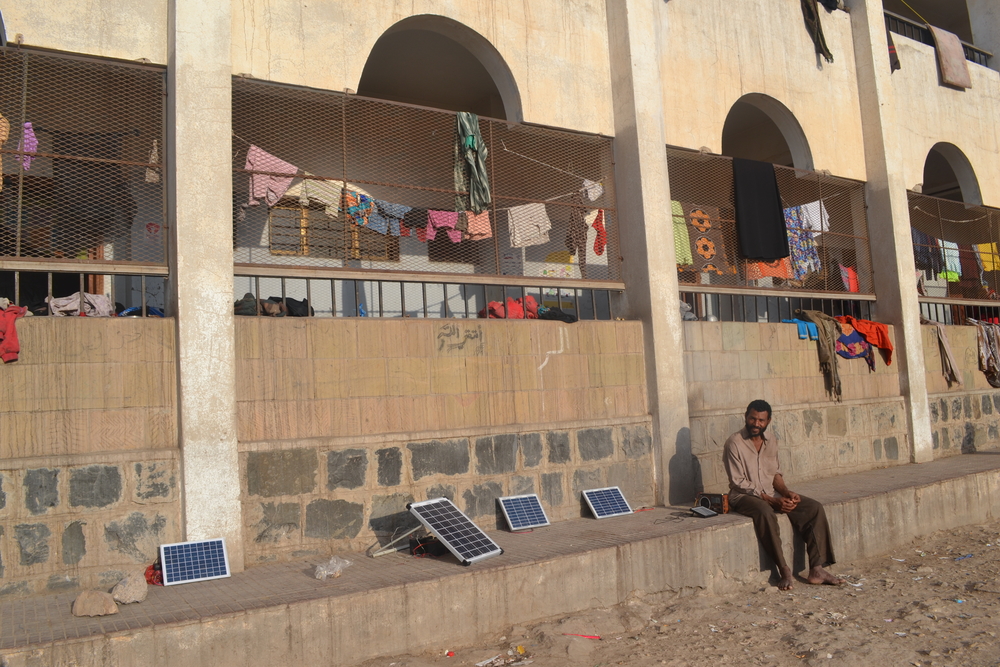 Nasser al-Sakkaf
In a school-turned IDP camp, Muhamasheen and other Yemenis live together but rarely mix

The breakdown of society

It’s not just poverty that has wrecked tribal networks. Al-Omeisy said that political allegiances and regional tensions have also widened the divides.

This has even happened inside his own family, he explained, as various branches have taken opposing sides in the conflict and no longer speak.

Much of the bitterness is split along north-south lines. The internationally recognised (but deposed) president, Abd Rabbu Mansour Hadi, has sided with southern separatists, anti-Houthi tribal leaders, Sunni Islamists, and a Saudi Arabia-led Arab coalition.

Hadi’s traditional fiefdom has been Aden, although the strategic southern port is contested by al-Qaeda and so-called Islamic State.

The Houthi rebels, who deposed Hadi in 2015, have their power base in Sa’adah, northern Yemen, and still control large parts of the country, including the capital Sana’a. They’re backed by the former president of 33 years, Ali Abdullah Saleh.

The north-south division is older than the war, but these days it’s become a geographical distinction that can mean life or death.

“If I go to a checkpoint now, the first thing a Houthi [fighter] will ask me is where are you from,” explained al-Omeisy. The same happens at checkpoints run by Hadi loyalists on the other side.

Farea al-Muslimi, a visiting scholar at the Carnegie Middle East Center, is also worried about the increasing geographical divisions, which he says are actually fiercer than sectarian tensions, although those are on the rise too.

Others on the margins

Aside from the Muhamasheen, those who lack traditional access to power – like women and children – are also among the most vulnerable.

Al-Muslimi worried about a generation of children growing up without enough to eat, and Omeisy said: “you see women going to garbage cans in the middle of the night looking for food when no one is looking.”

Why does no one care about Yemen?

When the war hits home

Both mentioned Israel’s recent evacuation of 19 Yemeni Jews – some of the last remaining of members of the community – as an especially sad phase in the war.

“That shook me,” al-Muslimi said. “Civilisations and nations don't die when their people die fighting. They die when their minorities and history die."

No one blames the Jews for leaving – after all, one of the Houthis main slogans plastered across Sana’a is: “A curse upon the Jews.”

But al-Muslimi sees it as a sign of a deeper malaise, as divisions deepen and society fractures.

“There is little if any place left to live in peace, especially if you are a minority or already a marginalised group,” he told IRIN.

What peace will emerge?

Now that peace talks are imminent, there’s concern of who exactly is coming to the table, whether they’ll represent civil society, look out for the little guy, or even be any different than Yemen’s traditional power brokers.

Given the fact that the main protagonists in the war are both old men and former or deposed presidents, al-Omeisy, for one, isn’t holding his breath.

“Now that the divisions are even deeper and the humanitarian situation is more catastrophic, even if there are peace talks it is still the usual suspects back in play, and that won’t improve the situation for the people,” he told IRIN.

Al-Muslimi too worries about what sort of society will emerge if and when the war ends.

“This is a civil war, not a football game where one team wins and you go home,” he said. “Hatred, revenge, tribal rivalries: this is what is terrifying. For the first time Yemenis are not meeting to talk and chew ghat... Now they are meeting to fight each other. And there will be consequences [after the war]. It will be ugly.”