In a hotel set amidst an olive grove on the Greek island of Lesvos, refugees fleeing violence in Syria, Iraq, Afghanistan and other war zones share their traumatic experiences and mourn the loss of their past lives.

A Syrian woman is haunted by the memory of her husband dying from a cardiac arrest as they tried to cross the Turkish border with their four children. An Iraqi woman is traumatised by her encounter with “The Biter”, a metal tool used by the so-called Islamic State to clip off the skin of women dressed immodestly. And Hayat, another Syrian refugee, arrives on Lesvos to find that her hands are paralysed – a psychosomatic effect associated with post-traumatic stress disorder (PTSD).

They will only remain on the island for a few days before continuing their journeys to northern Europe, making the provision of clinical therapy for their trauma impossible. A psychosocial support team from an Israeli NGO, IsraAid, offers some short-term coping strategies to help them accept their past and prepare for the future.

“When they come to us destroyed, we tell them, ‘Look, you have brought your family to safety; you can continue onwards in your journey,’” said Warda Alkrenawy, who heads the team of volunteer psychologists and counsellors, many of them Arabic speakers.

Lesvos has received 60 percent of the nearly 130,000 refugees and migrants who have arrived in Greece since the beginning of the year. Here, as in other locations on the frontlines of Europe’s refugee crisis, the urgent need to provide new arrivals with basics such as food and shelter means that mental healthcare needs go largely unmet.

While there is no data available for how many refugees living in Europe are suffering from psychological trauma resulting from the conflicts they have fled, a study published by the German Federal Chamber of Psychotherapists last September estimated that as many as half of the refugees living in Germany – the final destination for many of those arriving on Lesvos – have mental health issues. Besides depression, the most common problem is PTSD. But according to the study, only four percent of PTSD sufferers are receiving treatment.

To treat or not to treat?

In most contexts, delving into traumatic memories forms part of the healing process. But Talya Feldman, a volunteer with IsraAid’s psychosocial team, explained that working with refugees in such short timeframes meant that alleviating the symptoms of PTSD was often the best they could hope for.

“Living in denial is not a good coping method, but if you’re still in [a potentially traumatic situation], and we don’t have the resources to really open the wound and treat it, it can be the best way,” she told IRIN. 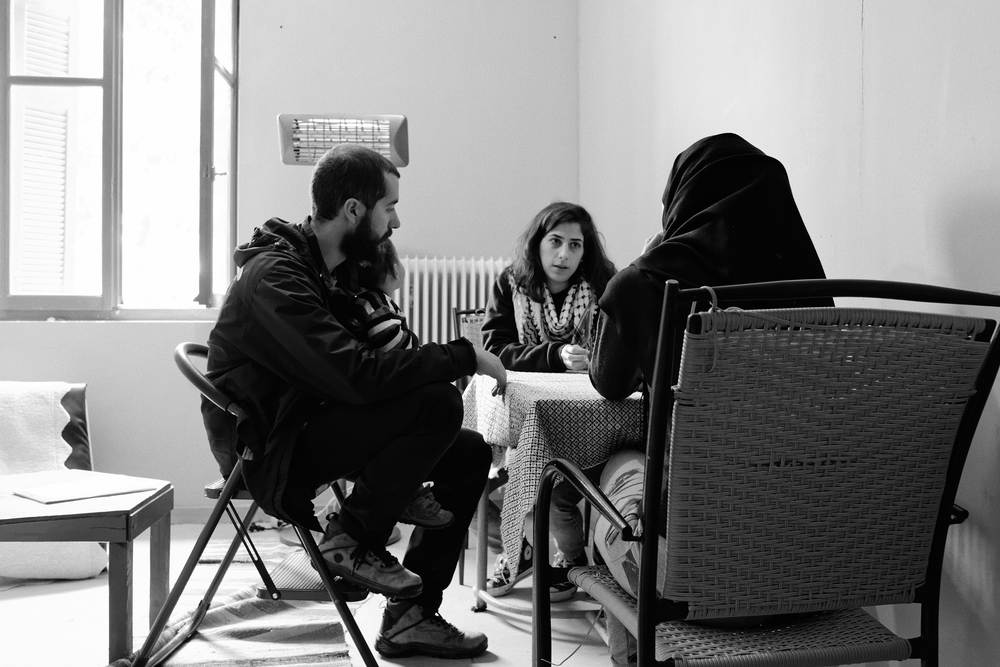 Neal McQueen
A psychosocial session with a refugee, therapist, and translator at Pikpa camp on Lesvos

Hayat, the Syrian refugee with the paralysed hands, recovered quickly once medical tests showed that the cause was high levels of stress preventing oxygen from reaching her muscles, rather than any physiological problem. “Just to know that, with all the uncertainty around her, that there was a cause and solution to this one thing, helped her to immediately relax,” recalled Mira Atzil, a clinical psychologist with IsraAid.

Atzil encouraged the woman, whose husband had died as they crossed into Turkey, to view the tragedy as an event over which she had no control, in contrast to her future.

Part of this looking forward to the future involves preparing the refugees for what they will need in the weeks to come, from information on requesting asylum, to the available routes, as well as warnings against the dangers of continuing onwards with smugglers.

For many of the refugees, Lesvos may be their first and last opportunity to receive psychological treatment. There is currently no mental healthcare network in place to connect refugees with further treatment in other countries along the western Balkans route, although some psychosocial support is available in Serbia, through Atina, an NGO based in Belgrade.

Rima Alshami, a cultural mediator with the organisation, who moved to Serbia three years ago after narrowly escaping a car bomb that exploded near her home in the Syrian capital of Damascus, noted that refugees in transit have emotional coping mechanisms that allow them to continue onward.

“When you make the decision to fight, you’re strong,” she said of the refugees she has met. “It’s when you settle that you need to collapse.”

“When you make the decision to fight, you’re strong. It’s when you settle that you need to collapse."

Originally a stockbroker, Alshami spent much of her first year in Serbia in a deep depression that made it difficult for her to get out of bed, let alone process any of her emotions. She said she didn’t seek psychological care because she was too busy finding employment and navigating her new country's bureaucracy.

The final destination for more than one million asylum seekers in 2015 and a further 153,000 in the first two months of 2016 has been Germany, according to government figures.

The Berlin Centre for Torture Victims (BZFO) – one of only two organisations in the city that offers trauma care free of charge to refugees – is providing short-term intervention to more than 180 refugees and long-term counselling and psychosocial support to more than 700. But BZFO is only able to help about 20 percent of the refugees who request its trauma treatment services.

The only other option for most refugees is to seek help through the public healthcare system – a bureaucratic process that can take months and where interpreters are not guaranteed during therapy sessions.

A star is born

Syrian filmmaker and anti-regime activist Firas Alshater, 24, first started receiving therapy at the BZFO when he arrived in Germany in 2013 and was having flashbacks and nightmares about the torture he experienced in a Syrian jail. 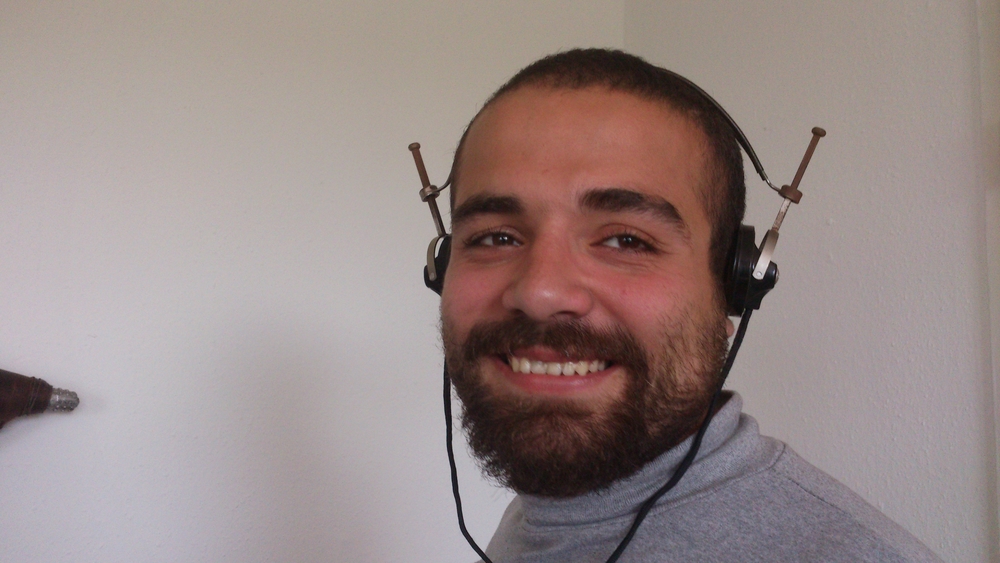 Juuso Santala
Since receiving treatment for his trauma, Firas Alshater has been able to resume his career as a filmmaker

While he still suffers from occasional nightmares, Alshater has reinvented himself as one of Germany’s most sought-after YouTube stars. His web series “Sugar”, which has gone viral since launching last month, comically muses on German society and culture from his perspective as a refugee.

Alshater’s experience of accessing long-term psychological care is rare. He said a number of his friends suffer from sleepless nights, flashbacks and other symptoms associated with PTSD, but that few have sought help. While some are deterred by the stigma still attached to mental health problems in many cultures, others are intimidated by the prospect of divulging their darkest memories to not one but two strangers: a psychologist and a translator.

BZFO’s psychologists say they’ve seen positive results from the use of relatively new methods like Narrative Exposure Therapy (NET), first used to treat Sudanese child soldiers. Patients recall their experiences chronologically in order to crystallise the trauma as a past event and prevent it from haunting them in the present. The method’s relative simplicity means it can be administered by professionals with only basic training.

“It’s a really promising approach for patients here in Germany, especially since we have a shortage of Arabic-speaking therapists,” said Maria Boettche, head of BZFO’s research department.

BZFO press officer Meltem Arsu said that treating refugees for their trauma is critical for their integration into German society, and that there is an urgent need for the government to provide more support to mental healthcare services.

“Even short-term support through a social worker and some level of psychotherapy could be enough to stabilise the person so that they can go on with their lives,” she told IRIN.

Alshater said a big part of recovering from his own trauma has been getting back into filmmaking and “giving a message that all of us refugees are just people”.

“The most important thing for me was to realise that all that I had before was now gone, and I’m in a new life now.”