"My whole life lies in ruins," he said in an interview in Nad-e-Ali district last October. His field, one hectare, had been destroyed by disease and his meagre harvest wouldn’t be nearly enough to support his family of 16 people.

Last year, the average poppy farm in Helmand yielded 18 kg of opium per hectare, according to the UN Office on Drugs and Crime. A kilo of opium fetched $200, while the same amount of green beans sold for only $1.

Almost six months later, poppy season is in full swing in the western province of Helmand, which last year yielded almost half of Afghanistan’s entire opium harvest, according to UNODC. Afghanistan supplies the lion’s share of the world’s opium, most of which is refined into heroin in an illegal trade that enriches government officials, the Taliban and global drug dealing networks.

The Unites States invested $8.5 billion between 2002 and mid-2015 in programmes aimed at eradicating opium poppies and coaxing farmers into growing different crops, according to the US’s Special Inspector General for Afghanistan Reconstruction.

By almost any measure, that investment has been an abject failure.

Poppy production grew steadily throughout the NATO mission, which began after the US helped topple the Taliban in 2001. The NATO mission ended in 2014, the year that the UN reported a record harvest in Afghanistan, which supplied 90 percent of the world’s “illicit opiates”. Opiates were Afghanistan's biggest exports in 2014, with UNODC estimating the vaue at $2.8 billion, or 13 percent of the country's GDP.

Opium production fell by 19 percent in Afghanistan last year, but that was not due to eradication efforts, which reduced poppy cultivation in Helmand Province by only two percent, according to the UN. Anti-poppy campaigners instead had fungus and weevils to thank for wiping out more poppies in Helmand than eradication programmes ever have.

Production is set to bounce back this year, however, as farmers like Hakin get ready to harvest next month. And there is little effort to stop them.

The Afghan and US governments have now mostly abandoned eradication and crop substitution in Helmand, where the Taliban has in recent months managed to wrest control of many areas away from the government. As the Taliban gains more ground, the insurgents also gain more access to profits from the opium trade.

“Today, a lot of farmers in Nad-e-Ali are growing poppies again, as well as in every other district in Helmand”, said Mahmood Noorzai, the Helmand police commander responsible for narcotics.

“There is no eradication going on,” he told IRIN this week on the phone from the provincial capital, Lashkar Gah.

Opium takes a back seat to war

Afghanistan’s military has instead diverted resources towards fighting the Taliban in a war that only appears to be getting worse. The insurgent group has made steady gains throughout the country since the NATO mission ended in December 2014 and the US pulled most of its approximately 140,000 troops out of the country.

Afghanistan’s counter-narcotics police had to transfer their 32 helicopters to the military, said Baz Mohammad, the country’s deputy head of counter-narcotics, in an October interview. He added that the military had disbanded its battalion of 850 soldiers who had been assigned to poppy eradication after the US stopped funding it. 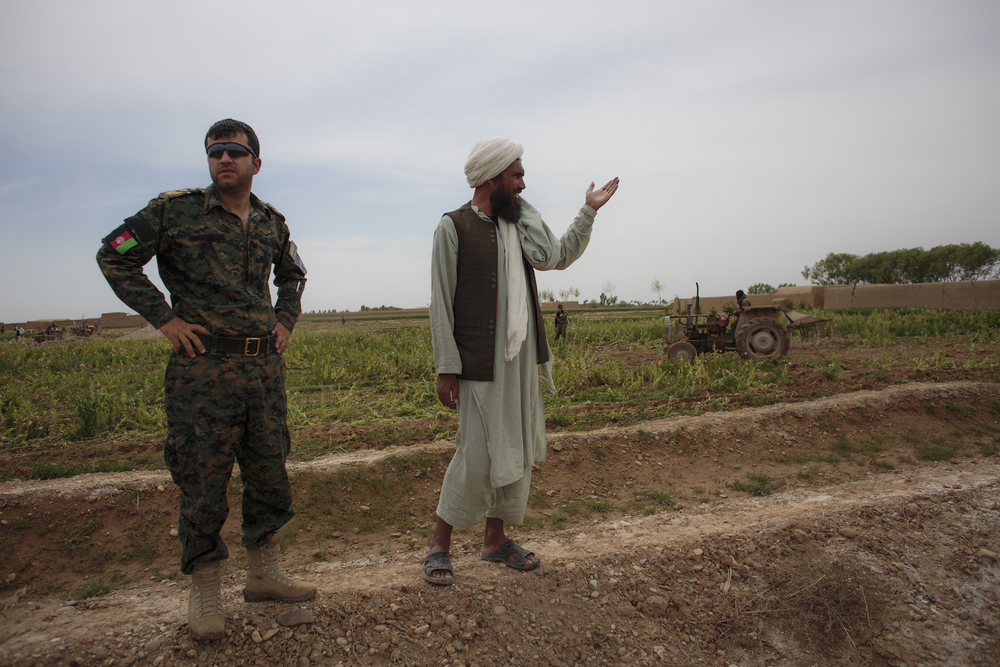 Even as eradication efforts falter, experts say the Taliban is relying increasingly on the opium trade to fund its insurgency. The Taliban now reap profits at every stage of the drug business, from cultivation through production and trafficking, according to a 2 February report to the UN Security Council.

“Taliban demand opium taxes from farmers, levy tolls at checkpoints where smugglers pass and then escort them for money through the lawless border region between Afghanistan, Pakistan, and Iran," he said in an interview in Lashkar Gah, where he had travelled to meet with elders from other districts to discuss security issues.

It’s not only the Taliban who benefit from the opium trade. Officials at every level of government are reportedly involved.

“In the Helmand districts of Nad-e-Ali, Garmsir, and Marjah – which are controlled by the government – government officials demand farmers pay 5,000 Pakistani rupees, almost 50 dollars, per hectare of poppy field,” said Noorzai, the police commander.

A former head of drug police for Helmand, who spoke on the condition of anonymity, told IRIN that his record of arresting 72 dealers and confiscating 28 tonnes of drugs in Helmand did not sit well with certain parliamentarians. They managed to have him transferred out of the position.

"As a police chief I was not afraid of the Taliban or drug dealers, but of the politicians who threatened me,” he told IRIN last October.

The officer is now in the central province of Wardak, while the drug-dealing MPs remain in Kabul.