Become a member of The New Humanitarian.
VALLIPURAM, Sri Lanka

Almost seven years after the end of Sri Lanka's decades-long civil war, the majority of former Tamil Tiger rebels are struggling to find jobs despite billions of dollars of extra investment in their regions.

Sivalingam Ruvendradass, who spent three years in a government “rehabilitation” programme, which is compulsory for former Tamil Tigers and provides them with education and vocational training, now looks back at wartime with some fondness.

“Then at least I was getting something from the Tigers,” he told IRIN.

Despite his training in carpentry, steady work was impossible to find when Ruvendradass returned home to Vallipuram, a village near the Tigers’ former political and administrative centre of Kilinochchi.

“There are new highways, new railroads, new electricity and phone lines, but no jobs,” said the father-of-three, who makes a living by rearing chickens and doing odd jobs.

This wasn’t how it was supposed to be.

The previous government under Mahinda Rajapaksa poured $3.5 billion into Northern Province alone, most of it into large infrastructure projects like roads, railways and electricity, according to the Central Bank. The spending was meant to promote reconciliation through economic development in the war-torn region.

"It would show our resolve for co-existence,” said former president Rajapaksa in a 2011 speech inaugurating the construction of a new railway line to the north. “What we are attempting now is to breathe new life into the heart of the nation, to start the journey that would unite the entire nation.”

Analysts say the government programmes to develop the war zone have largely failed to stimulate the job market. That’s because most of the money has gone toward infrastructure projects, while neglecting employment generation initiatives such as tax breaks to encourage factories to move into the area, and moves to boost business development like low interest loans and training.

“I have always maintained that the focus needs to be on promoting private enterprises within the region – supporting small and medium entrepreneurs there (to) grow through finance, technology and market access,” said Anushka Wijesinha, chief economist at the Ceylon Chamber of Commerce.

Central Bank figures show that between 2010 and 2012, when the large construction projects were at a peak in the former war zone, only 5.8 percent (24,303) of the 422,111 jobs created nationally were in Northern Province.

Muttukrishna Sarvananthan, who heads the Point Pedro Institute of Development, a research institute in the northern city of Jaffna, criticised the former government for employing mostly military personnel as labour in public projects. The strategy “deprived jobs for local people, especially youths,” he said.

There are around 12,000 former combatants, mostly in the Northern Province, who have been released after undergoing rehabilitation programmes, according to the Commissioner General of Rehabilitation. Only around 3,000 have gained permanent employment, most in the civil defence force under the police department.

Former Tamil Tiger Sivalingam Ruvendradass, pictured in December 2015, has been jobless since return 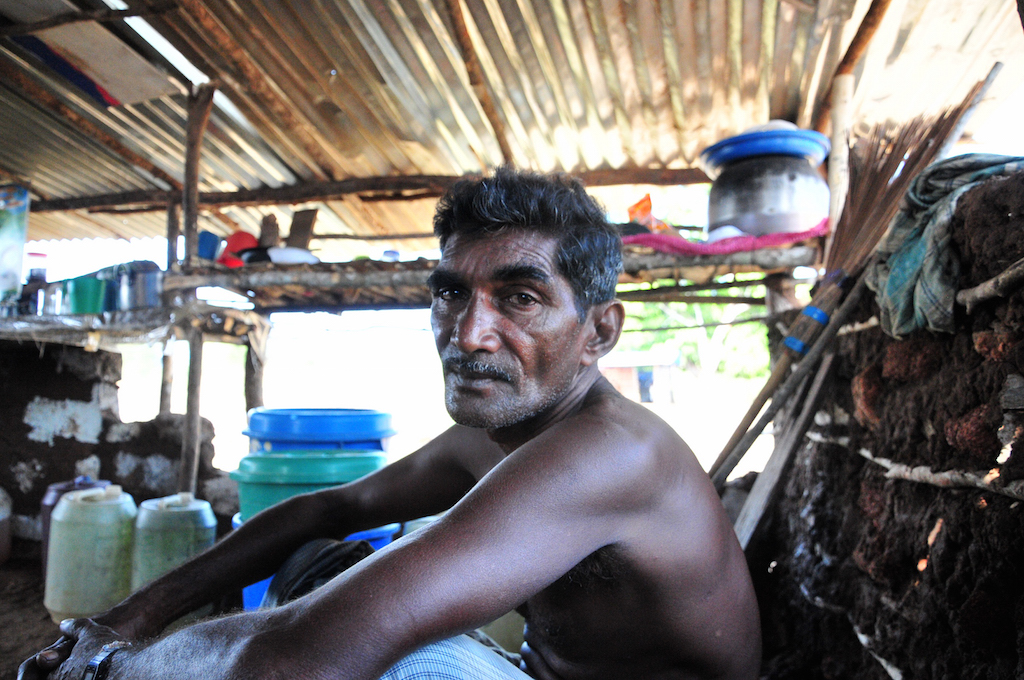 Two of the worst hit districts during the conflict, Mullaitivu and Kilinochchi in the Northern Province, have been plagued by high unemployment since the fighting ended in 2009. Kilinochchi suffers from the highest national unemployment rate at 7.6 percent, compared to the national average of 4.3 percent, according to national the Department of Census and Statistics.

Even the department itself warns that the numbers are untrustworthy. “These figures are to be treated with caution as the corresponding CV (coefficient of variation) values are high,” it said in a labour force survey published last September.

Economists also point out that the department uses a very low threshold to tabulate the employment rate. Anyone working at least one hour during the week in which the survey was conducted is considered to be employed.

Experts agree that promoting the development of small and medium-sized businesses is key to creating jobs in the former conflict zone. “The real game changer will be bringing in substantial new private investment into these regions,” said Wijesinha of the Chamber of Commerce.

The new government of President Maithripala Sirisena, which took power a year ago, is promising programmes to stimulate employment, although it has yet to launch any.

"We want make the North and East part of a larger national development programme,” government spokesman Rajitha Senarathana told IRIN. “We want to attract foreign investment while providing livelihoods training. There are also plans to provide loans and other assistance with donor funding."

Ruvendradass hopes the government will launch programmes to specifically create jobs for those who fought in the war. Former Tamil Tigers like him find it extra hard to gain employment. “We carry a certain stigma,” he said.