Yemen's water problem is not new but it is now so acute that the country is close to running dry. The vast majority of the population has no access to clean water, while state water companies are at risk of bankruptcy.

Before the latest round of conflict erupted in March, around half of the country’s 26 million people were reckoned to be using unsafe water. That percentage has now risen to almost 80, or an estimated 20.4 million Yemenis, according to Mahboob Ahmed Bajwa, head of UNICEF’s water and sanitation operations in the country. This is leading to a spike in malnutrition and water-borne diseases, especially in rural areas where buying clean water is often impossible.

“Without access to improved water supply, there are regular bouts of diarrhoea, particularly among young children, which will eventually have an impact on their nutritional conditions. They will lose weight and their growth will be significantly compromised,” Bajwa said. “We are sitting on a time-bomb.”

No fuel means no water

One of the most water-starved countries in the world, Yemen has long squandered much of its precious resources on cultivating qat, a narcotic plant chewed by most of the population.

But the extent of the current problem stems largely from a separate crisis: the massive shortage of fuel. Because Yemen’s water lies deep in the ground, it is impossible for it to be brought up with hand pumps – generators are needed.

Since a Saudi Arabian-led coalition began bombing Yemen in March in a bid to force Houthi rebels from power, it has introduced stringent restrictions on ships, leading to desperate fuel shortages. Consequently, much of the country is without power and there is insufficient fuel to power the pumps.

Before the fuel shortages, the Sana'a Local Corporation for Water Supply and Sanitation was supplying the capital with 50,000 square metres of water a day from 97 wells. Now, its deputy general director Ashraf Hasan Muaad told IRIN, it is providing just 15,000 square metres from 45 wells.

“If the fuel supply improves, the situation will immediately improve,” Bajwa explained.

“The Saudis shelled the water container in al-Nahdeen, which cost $3,000,000 and was providing water to 30,000 customers, and shelled many wells in the Noqum mountains to the east of Sana’a city,” Muaad said.

As the situation has become more desperate, thousands of customers have stopped paying – leaving the state company staring into the financial abyss. Muaad told IRIN it was facing potential bankruptcy.

“When the customers stop settling their bills, we won’t be able to pay for the diesel, to pay for the salaries of the staff,” he said. “We were consuming 100,000 liters of diesel before the power cut (the state electricity supply has been largely cut off), but now we need 600,000 litres a month (to power the generators)."

Those Yemenis that can afford to, pay for water trucks, but most can’t. At the few mosques that are still giving away water from public fountains, queues snake around the block.

“At the beginning of the campaign, I paid for water trucks, but it was impossible for me to continue as I am a court clerk and my salary is hardly enough for food and rent of house,” said Jamal al-Matari. “But I need water, so I have no option but to go or send the women or kids to bring water from the mosques.”

The conflict has exacerbated pre-existing trends. Yemen’s water tables have dropped to dangerously low levels in recent years. In the Sana’a region, for example, it has dropped from 30 meters below the surface in the 1970s to up to 1,200 meters, according to some estimates.

The knock-on effects for agriculture have been severe – with many farmers losing their crops. Hasan al-Najjar complained that he had lost his grape harvest. “I lost this year about YR1,000,000 (just under US $5,000) because I did not find diesel to irrigate my land, and, as you see there, have been no rains this year.”

Qat trees – which have mildly addictive leaves that Yemenis like to chew – consume up to 65 percent of the country’s irrigated water. More than a third of Yemen’s total water supplies – some estimates are nearer half – therefore go towards cultivating a plant that feeds no one, in a country where almost 80 percent of the population is using unsafe water.

On top of that, Muaad said, the lack of a cohesive government in recent years has encouraged a steady growth in the digging of illegal wells, which has further depleted water resources. 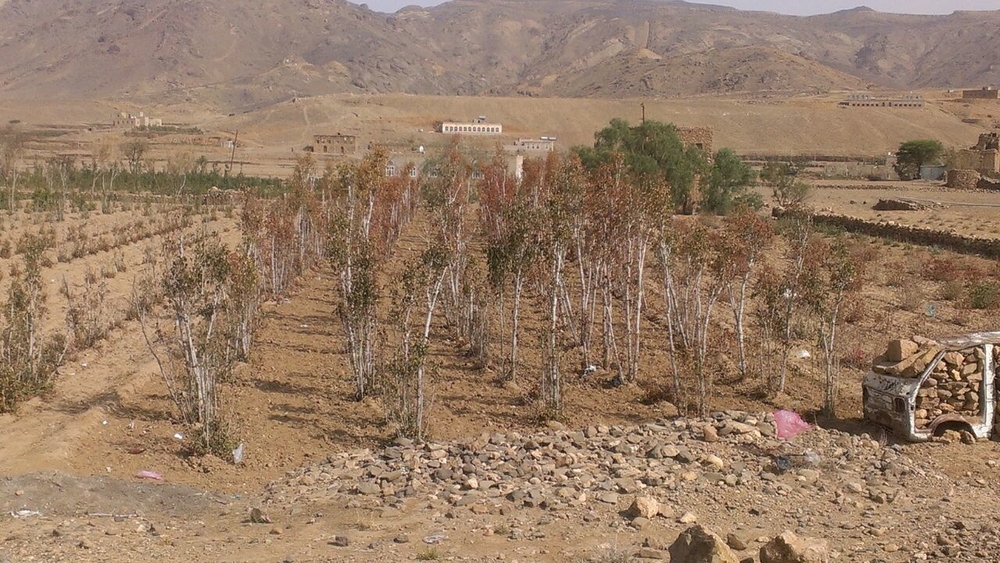 “There are 3,000 wells that have been dug without the permission of the authorities. Of these, only 700-800 still supply water. The others have run out,” Muaad said. “Sana’a basin is threatened with drought.”

The Shahik dam, the largest in Sana’a governorate and the second largest in the country, is now largely empty, as is the Mikhtan dam, which used to provide much of the water for the eastern and northern parts of the region.

International NGOs are managing to provide the state with enough diesel to stem the crisis in the capital, but the situation in much of the country, especially in remote rural areas, is unknown. “UNICEF is ensuring supply of water to three million people in 11 cities of Yemen which has [partially] averted displacements from the cities,” Bajwa said.

In Sana’a city, Muaad confirmed that this support was preventing the system from breaking down entirely. “We had three agreements with UNICEF: the first one was with 100,000 litres of diesel, the second agreement they supported us with 200,000 litres, and now we have signed the third agreement last week with 300,000 litres for supplying water.”

Aid organisations are also helping to provide certain neighbourhoods with 2,000-litre tanks and paying for emergency supplies for the poor and the displaced.

“A benefactor provided us with this tank,” Abdullah al-Ashmori said. “We are very grateful for him, but it is not enough because our neighbourhood is very crowded and the tank is empty on the same day [it is filled], and it is only filled every two or three days.”