Taking judicial proceedings to rural areas of Timor-Leste with “mobile courts” is increasing citizens’ access to justice as the young country builds its government from the ground up, experts and practitioners say.

“Before mobile courts, Timor-Leste was dealing with a very formal and new system of law, and a population that had only a small taste of how that system worked, and even less access to it,” Pedro Raposo de Figueiredo, a judge in a mobile court unit based in Suai, a town on the southern coast of Timor Leste, told IRIN.

The Justice System Monitoring Project (JSMP), a Dili-based NGO, notes: “Timor-Leste only has four district courts to handle cases from the country’s 13 districts, which means many people must travel considerable distances to access the courts, which is often difficult and expensive.”

According to the Japan-based Asia-Pacific Human Rights Information Centre, Timorese mobile courts are “a way of showing the community that the court is functioning, addressing transport and infrastructure problems; and educating the community about judicial procedures”.

First introduced in 2008, mobile courts are currently operational in four districts - Ainaro, Manufahi, Bobonaro, and Cova Lima - with plans to scale the programme in Dili District and others pending funding in coming years.

“Mobile courts offer a touch and feel experience with justice, and with government, so the implications to educate the public and inspire confidence are enormous,” argued Noura Hamladji, UN Development Programme (UNDP) country director in Timor-Leste.

“Building citizens' confidence in the state in a post-conflict society like Timor-Leste is crucial to maintain stability and to support all other development activities.”

Timor-Leste, home to 1.1 million people, was a Portuguese colony before it was occupied by Indonesia in 1975, prompting a decades-long violent struggle during which hundreds of thousands of people perished; it achieved independence only 12 years ago.

In 2006, the country experienced widespread riots and conflict due to dissent within the army, which resulted in military intervention. More than 100,000 people were displaced by the violence, mostly in the capital, Dili.

The country’s legal system is modelled on Portuguese law and its history is plagued by violence, impunity, and occupation - causing “limited Timorese participation in national government”. The mobile courts system is as much an attempt to educate about the law as it is to enforce it, experts say. 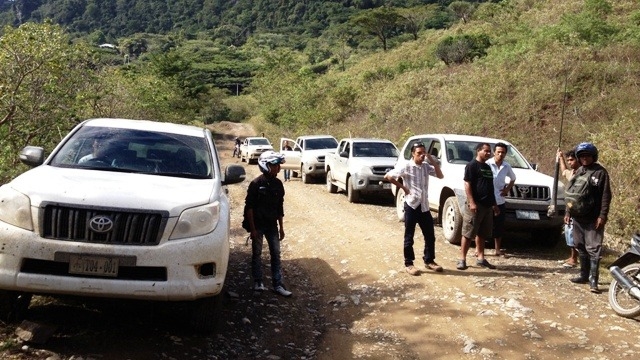 “We work with highly skilled interpreters who speak many Timorese languages and dialects,” explained de Figueiredo, adding that judges focus intensely on the clarity of the process and its outcomes because in most cases it is the first time for the petitioner and the defendent to handle a crime in a formal system.

“The mission of these courts is of course to deliver actual justice by sentencing perpetrators, but it’s also partly a charm offensive - we want people in the areas we visit to understand that this is an accessible option for every citizen,” he said.

In February 2014, Vice-Minister for Justice Ivo Valente announced that from 2010-2013 mobile courts had processed 280 cases and “2,000 people or more had benefited from the mobile court process.”

However, JSMP has documented some issues of patchy compliance with protocols, and warned that the system must maintain its adherence to the central law. In some instances in 2012 and 2013, mobile courts failed to adequately protect victim identities by leaving proceedings open to the public.

“The entire community goes through the experience of how the court gathers and considers evidence of a crime,” explained de Figueiredo, stressing that courts are mandated to protect victim identities in sensitive cases.

And the opportunities for education go beyond courtroom proceedings.

“Suko [village cluster] chiefs have told us they are thankful that there is a formal system to deal with difficult and complicated cases,” he explained, pointing to a recent incident in which a fight between two village members escalated until 50 houses in one village were burnt down. A mobile court handled the case.

“After listening in on court proceedings, police officers ask us questions about the law and their responsibilities, whether they can improve the way they respond to reports of crimes,” de Figueiredo said, touching on issues highlighted by a 2013 International Crisis Group report which explained that police “Investigative capacity remains very limited. Few officers understand the Criminal Code, and both record-keeping and storage of evidence remain problematic.”

The Asia Foundation’s 2013 Timor-Leste Law and
Justice Survey found a long-term increase in awareness of, and desire for,
formal justice. Eighty percent of respondents who had heard of a court reported
they would want a court to settle local disputes, up from 54 percent in 2004.
The number of cases resolved by the four district courts has also increased -
from 808 in 2010 to 1,380 in 2012.

“Part of the utility of mobile courts is to deliver formal and transparent justice; part of it is to let people have their first ever glimpse of the fact that it can serve them,” said de Figueiredo.