A dozen children toss a frisbee around in a park in Rawalpindi's Gawalmandi neighbourhood, under the shadow of a 30-foot-high tower capped with two loudspeakers. “When the alarm sounds, it means a flood is coming, so we should leave,” one explained.

“The water came so fast, we had no time, no chance to save them.” Rawalpindi received 620mm of rain in 10 hours, and the city's haphazard network of drains and streams overflowed, inundating areas with up to 30 feet of water, killing 74 people.

In an effort to be better prepared in known flood-prone urban areas, the Pakistani authorities are trying to build sophisticated systems to predict and monitor floods, hoping to give locals a few hours warning to get to higher ground.

“In most cases, you can predict floods more than 12 hours ahead of time, and can tell people so they may evacuate,” explained Shezad Adnan, a flooding expert at the Pakistan Metrological Department (PMD). “But in these flash floods, the delay time is very short, a few hours, so within a short timeframe it is very important to get information to people.”

Faisal's workshop sits in a bend of the Lai Nullah, a stream running through the city that collects water from six tributaries flowing south from the Margalla Hills, about 15km to the north. Even a minor shower here causes the stream to spill its banks.

According to the National Disaster Management Authority, more than 50 districts in Pakistan fall directly in the path of flash floods, which usually occur during the monsoon season, between July and September each year. Melting glaciers in the north raise water levels in rivers, and torrential monsoon rains add more water. Last year, 234 people were killed in the floods in Pakistan, and more than 21,000 homes were completely destroyed.

Six rain gauges and two water level gauges with up to five days of back-up power sit in the Lai Nullah stream, taking measurements every two minutes. This data is then wirelessly transmitted to a control room in Islamabad, at the PMD's headquarters.

There, meteorologists use the information to predict flooding, passing on their forecast to a control room in Rawalpindi. City officials can issue warnings to residents based on what they are seeing. At 10 points in the city's most flood-prone areas, warning stations - towers like the one in Gawalmandi - can issue instructions to residents to get to higher ground, or leave the area altogether.

“We end up issuing evacuation announcements around three times every year,” said Usman Khalid, standing in front of two screens in the Rawalpindi control room displaying the water levels across the city in near real time.

The idea is to be able to issue an evacuation alert 60 minutes before a flash flood. When he thinks an area is in danger, Khalid picks up a phone on his desk and his voice booms into the homes of residents living within 300m of one of the 10 warning posts he can select.

“People's responses have not been so positive,” he explained. “No one wants to leave their property behind, so they just stand on bridges or whatever high ground they can find.”

“The water came so fast, we had no time, no chance to save them.”

But the system has helped, like during a flood last year. “It was 2am, and we saw that a flood was going to occur so we sounded an evacuation alarm. People didn't leave their area, but they woke up and realized what the water level was outside, so many went for higher ground.”

A handful of times, officials have had to enlist the help of police and the army to force people to evacuate. Three or four lives are still lost to floods in the city each year, but it's a marked improvement from before the system was installed in 2007.

But the millions of dollars to expand such schemes are hard to find, despite evidence of the financial benefits of investing in disaster risk reduction.

The $5.5 million it took to put together Rawalpindi’s early warning system on the Lai Nullah came from a grant by the Japan International Cooperation Agency.

“We have identified 24 locations across Pakistan, including in urban areas where there is a need for early warning systems,” Azmat Hayat Khan, director of the Remote Sensing & Computer Division at PMD, told IRIN. Pakistan's National Disaster Management Plan has proposed setting up these systems since 2012, but there is no government funding available.

Such systems would be a step-up from more basic pilots based on weather forecasts rather than scientific measurements.

In Pakistan's northwestern district of Chitral, residents are used to regular flash floods that can wipe out villages. 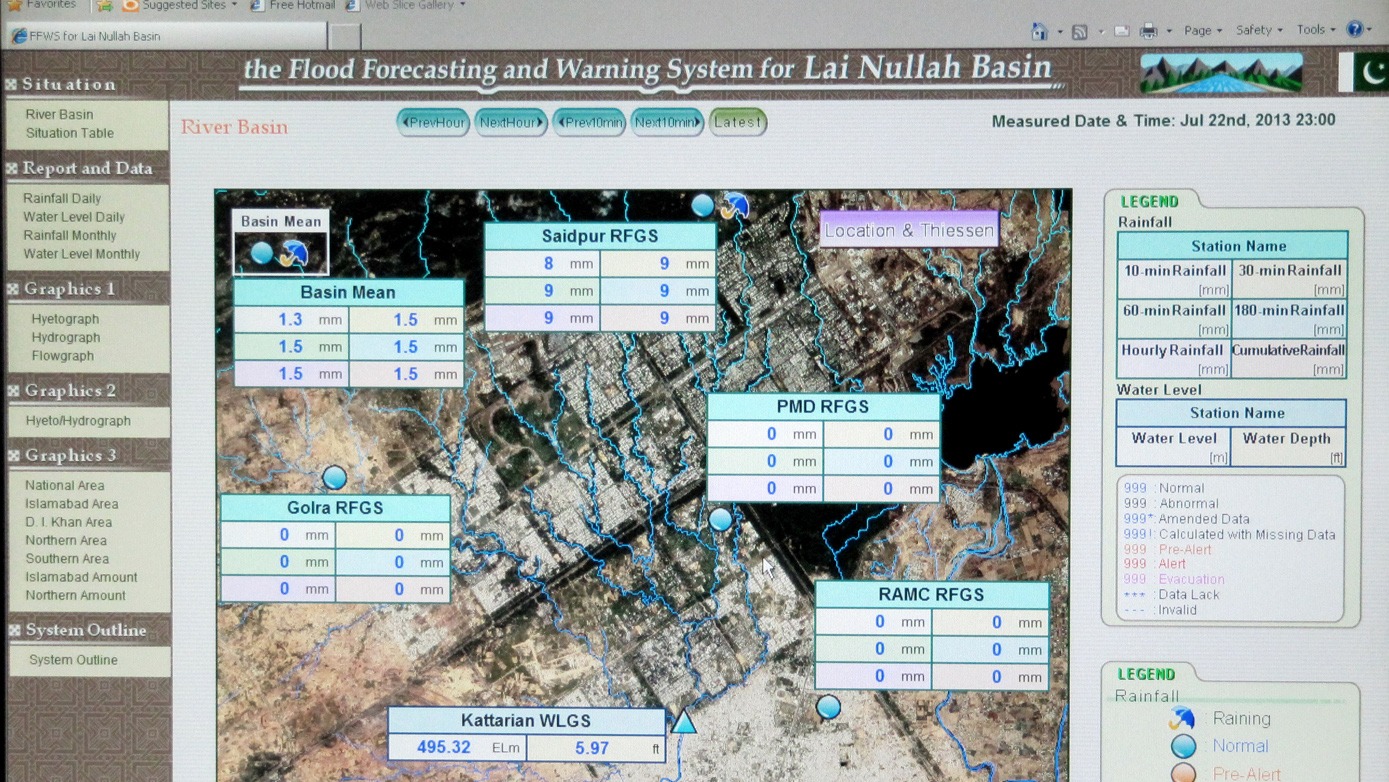 After a heavy snowfall and flood in 2007 killed 78 people, the International Centre for Integrated Mountain Development and FOCUS Humanitarian Assistance set up a programme to create Community Emergency Response Teams (CERT) in four villages along the Yarkhun river. The teams can quickly warn locals to evacuate.

“We can give some guidance, but we have no system to detect and respond to flash floods, no way to send computerized immediate alerts,” said Niaz Ali, from FOCUS. “We should have a good system like the one in Rawalpindi, but it's too costly.”

In Nowshera, Shah Nasir is hoping for a system like Rawalpindi's as well, but says funding has always been an obstacle.

“The government has other priorities, and a proactive disaster risk management programme is usually low on their list,” said Nasir, who heads a strategic cell dedicated to early warning systems in the Khyber-Pakhtunkhwa Provincial Disaster Management Authority. “We asked for a budget of Rs. 1.5 billion (US $15 million), and got Rs. 200 to 300 million instead.”

Basic needs like weather radar systems have languished for years, say meteorologists. Current systems do not cover most of the province, so since 2005, the authorities have been planning to install a Rs. 300 million radar system in Chirat, near Peshawar, but no funding has been allocated.

This month, Nasir's staff will receive about Rs. 1 million as part of a programme funded by the European Commission for Humanitarian Affairs (ECHO) and the UN Development Programme (UNDP) to set up a pilot early warning system in 10 districts. “We want to use all the new technology available to us to monitor flood levels, predict floods, and disseminate early warnings,” said Nasir.

Authorities plan to install water level gauges in the Kabul river and its tributaries. In the city of Nowshera, where the Kabul river floods nearly every year, an early warning system like the one in Rawalpindi is being planned.

“We want to extend this to FATA [the Federally Administered Tribal Areas] especially,” Nasir told IRIN, “because that is where the river waters come from. We want to monitor river water levels and rain gauges, and feed it into a model to figure out, OK, we expect this much flooding downstream.”

The idea is to be ready for an evacuation if a flash flood seems imminent.

In a separate Rs. 4 million programme funded by UNDP, the authorities plan to leverage FM radio stations and an existing cellular phone network that connects 74 percent of the population to alert locals to flood threats. Officials hope to register 4 million residents that could be sent an SMS alert just a few minutes ahead of an imminent flood.

Nasir would like to see any warning system eventually connected with a system that can automatically respond to rising water. “In developed countries, this kind of mechanism is already usually in place,” he said. “They have automated gauges and monitors that can even automatically turn on pumps. It's an ambitious plan, but we want to get to that point eventually.”