Myanmar’s central “dry zone”, home to a quarter of its 58 million people, is falling short on food production, pushing local people into hunger, malnutrition and debt.

“Getting food is a headache for us every day,” said 30-year-old Kyi Htay as she prepared a meal of tomato curry and rice on the floor of her one-room hut in Bagan, Mandalay Region.

The central regions of Mandalay, Magway and Lower Sagaing, known as the “dry zone” and covering 13 percent of the country, have some of the lowest rainfall levels; 60 percent of households are farmers and 40 percent landless.

According to a 2014 survey jointly administered by the World Food Programme (WFP), Save the Children, and the Ministry of Livestock, Fisheries and Rural Development, 18.5 percent of dry zone households face food insecurity.

“One third of households reported experiencing a month or more during the year when they had had a problem to meet their food needs, typically between June and July, and all households had short food stocks,” said Andrea Menefee, nutrition adviser with Save the Children-Myanmar.

As residents of the dry zone cope with food insecurity, experts point to severe malnutrition and debt as symptoms of increasingly poor harvests in recent decades, and say short-term solutions must be implemented alongside long-term adaptive measures.

According to the 2014 joint survey, 12.3 percent of children under five in the dry zone were found to be acutely malnourished. When a population has acute malnutrition levels of more than 15 percent it is classified as a “critical emergency” by the World Health Organization.

A woman selling fruit and eggs by the roadside near Mandalay 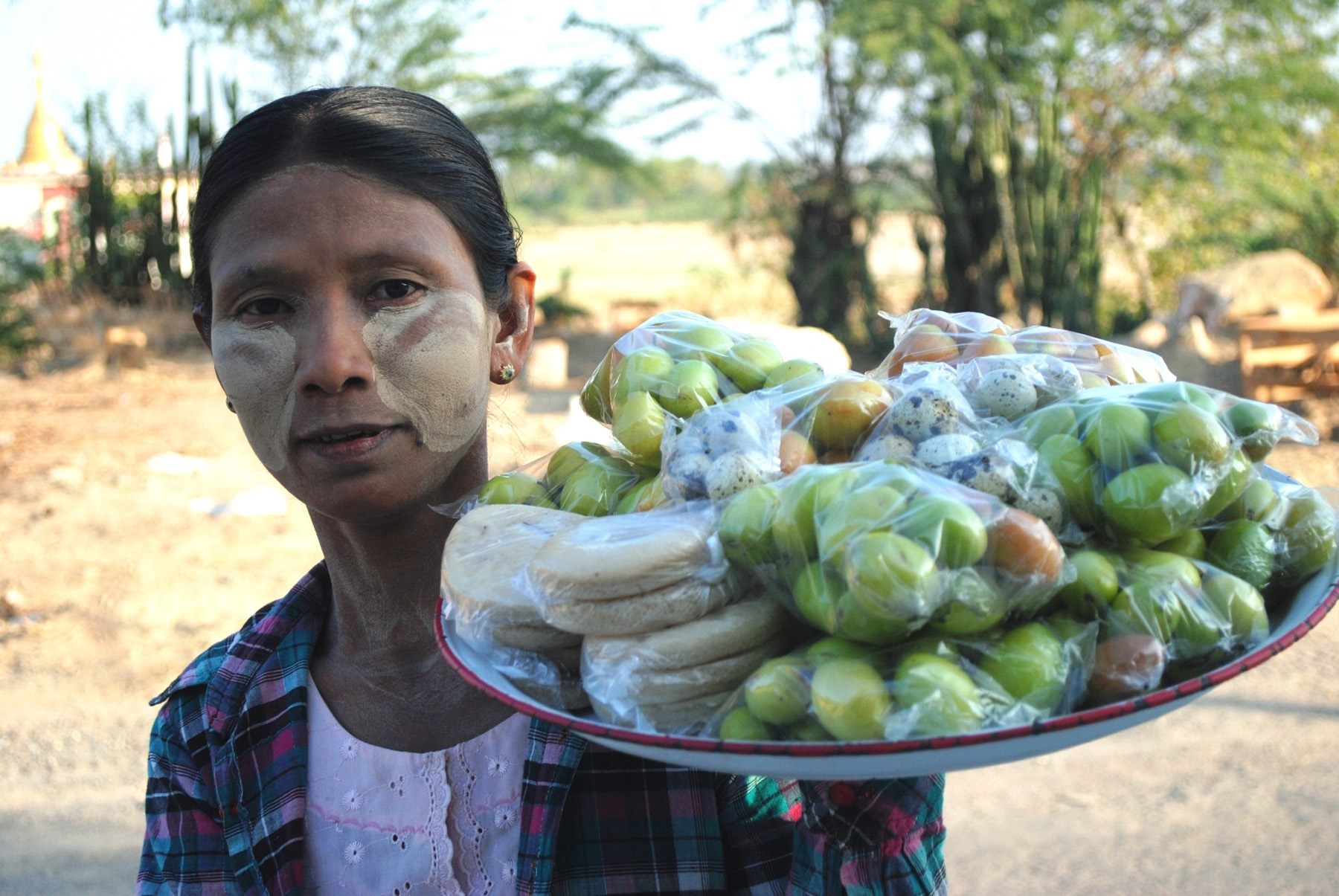 “There are a wide range of likely causes of under-nutrition in the dry zone,” said Kelland Stevenson, Myanmar country director for Save the Children.

“These include food insecurity but also [lack of] income, poverty, poor water, sanitation and hygiene, disease and poor breastfeeding and complementary feeding practices,” he said.

According to Save the Children’s Menefee, “both acute and chronic malnutrition require attention, as well as the nutrition status of mothers, particularly pregnant and lactating mothers.”

Calling for a “life cycle approach” to address nutrition issues, Menefee explained: “There is a need to focus on women of reproductive age, pregnant and lactating mothers and infants… and also children from two to five years of age.”

“We’re indebted because of food. We have to spend much money for that,” said Hla Htay, a 53-year-old widow who lives outside Bagan, adding that she has accumulated US$400 in food debt over the past two years.

For farmers like 48-year-old Phyu Win, who lives with his family of nine in Pyi Tharyar Village, Mandalay Region, borrowing food and money has become a way of life.

“For rice, we just take loans no matter how much the interest rate is… This is typical in our area,” he said.

A WFP official who preferred anonymity explained: “Households in this area experience high levels of debt, and casual workers frequently borrow money or use credit to purchase food. Farmers have to contract debts from various sources to cover farming costs such as input materials and labour.”

WFP has been working in Myanmar’s dry zone for more than a decade, supporting employment interventions for vulnerable populations, working with pregnant and lactating women, and helping to implement school feeding programmes for more than 50,000 children.

Experts point to gradually worsening water scarcity and unpredictable weather as root causes of today’s levels of food insecurity, and they believe solutions require strategies for the longer term.

“As a short-term solution, government social protection mechanisms, such as guaranteed minimum work-day programmes, would help,” said Ahamad. “School feeding programmes for children and skill development and capital support to young people could help with nutrition and income problems,” he said, while cautioning that such short-term programmes needed to be complemented with a long-term vision.

“As a long-term intervention, climate change adaptation initiatives such as reforestation, alternative agriculture production development, and soil improvements [need to be considered],” he argued.