The recent spate of Taliban-led attacks against electoral targets in Afghanistan, with the presidential vote just days away, has increased concerns in the aid community about the use of schools and health clinics as polling stations.

“The fact that Afghan and international security forces will be involved in the protection of voting centres and the fact that the current political process is strongly contested [means that] voting centres present a high risk of being attacked during the process,” said a recent statement by the Agency Coordinating Body for Afghan Relief Development (ACBAR).

"The neutrality, especially of our health clinics, is put in jeopardy by having these political activities inside our health structures"

In the 2009 elections, 249 security incidents involving schools were reported for the month of August, compared to 48 in July and 38 in September, according to a UN Assistance Mission in Afghanistan (UNAMA) report. Attacks on health facilities also almost doubled.

“There are still a number of health centres that are listed as potential polling stations and the concerns that have been expressed by all of us on this is that not only does it compromise the health sector, but also it denies people access to healthcare for a while,” Humanitarian Coordinator Mark Bowden told IRIN. “That’s one of the practical issues that needs to be addressed.”

Last month, the Taliban issued a statement warning all Afghans to avoid electoral offices, voting booths, rallies and campaigns. “The Islamic Emirate shall never allow the enemy to be successful in achieving its goals through this fake theatrical charade,” said the statement.

“In this regard we have given orders to all our Mujahedeen [guerrilla fighters] to use all force at its disposal to disrupt these upcoming sham elections; target all its workers, activists, callers, security apparatus and offices; and the nation must also stop the process of elections from taking place in mosques, clinics, schools, madrassas and other public places.”

Kabul saw four major attacks this past week. The UN has recorded more than 4,600 security incidents across the country in the past three months leading up to the start of the election campaign, which began in February. This represents a 24 percent increase in violence compared to the same period last year.

One father living in Kabul told IRIN he was concerned about the use of health centres as polling stations because the care of patients will be disrupted, and if people need to seek medical attention, their lives will be put at risk. 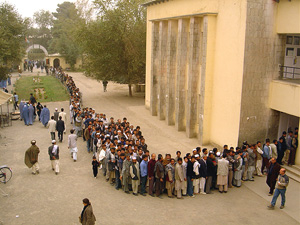 “I worry more that my mother or sister will not be able to get care that day if they are sick, whereas schools on the other hand are closed, so if there is an attack, children and teachers won't be there.”

Justine Piquemal, director of ACBAR, told IRIN that while it is positive that schools are closed on election day, tensions in the weeks surrounding elections are very high with the potential of possible attacks jeopardizing the lives of teachers and children. Also, schools that come under attack will need to be rebuilt.

While schools are often used as polling centres in other countries, in Afghanistan the practice means there is often a significant impact on children’s access to basic education, as well as a security risk.

Under international humanitarian law (IHL) parties to conflicts are required to make a distinction between civilian and military targets, with civilian buildings protected unless they are seen to be used for military objectives. Medical facilities have protected status under IHL and it is a war crime to deliberately attack them.

“For us, the neutrality, especially of our health clinics, is put in jeopardy by having these political activities inside our health structures,” Benoit De Gryse, Médecins Sans Frontière's (MSF) country representative in Afghanistan, told IRIN.

“In all our programmes, we are really interested in having hospitals weapon-free and no military or police presence. The whole idea of having hospitals in a neutral environment outside of the conflict is the precondition to operate. Putting polling stations inside the health facilities, clinics or hospitals breaches that impartiality in a conflict environment like Afghanistan.”

However, this is not just a one-time issue, according to De Gryse, who says it is a continuous struggle for health care workers.

“Because it is now elections, more people speak out - but in reality, this problem is a constant struggle. It is not just on 5 April that this is a problem but also on 10 April… Patients need to receive health care and reach hospitals at all times. They should not be stopped and interrogated at checkpoints when they are wounded and need immediate care. It is a good moment to raise this now because it should not be just at election time.”

Attacks against healthcare facilities and staff increased in 2013, according to UNAMA’s Protection of Civilians in Armed Conflict 2013 report. Most incidents involved threats, intimidation and harassment, followed by abductions and targeted killings of medical staff.

Sixty-two conflict-related incidents affecting education were also reported in 2013, including threats, intimidation and harassment of students and teachers. The report highlights the issue of schools being occupied, and the impact of military operations in the vicinity of schools on attendance rates.