With the year’s main planting season just weeks away, many in the Central African Republic (CAR) have been left desperately ill-equipped by months of conflict. In the charred village of Bessan, to the west of the country, the concerns are typical: a dire lack of seeds, tools and manpower.

Here many houses are roofless with fire-blackened walls; even intact homes lack furniture, food or tools.

“The Seleka stole our machetes, hoes, rakes and watering cans and even our beds and other belongings,” one of the villagers, Veronique Nabata, told IRIN, referring to the alliance of mainly Muslim rebel groups that swept to power in a coup in March 2013 and for the next few months committed atrocities in many parts of the country.

“They also took our stocks of groundnuts, maize, beans and pistachio, and the Peuls [a semi-nomadic people] grazed their herds on our fields of manioc.”

Males aged 15-45 are scarce in the village; there were hardly any among the 20 or so people who listened as Nabata and other community leaders explained the difficulties they are facing.

A village elder, Isidore Ngaldi, said the young men were needed to help prepare the fields, but added that they had all fled to the bush.

The last two seasons in Bessan and in many other CAR villages were severely disrupted by marauding Seleka gangs and their local allies. A third unsuccessful season will result in “a full scale food and nutrition crisis”, the UN Office for the Coordination of Humanitarian Affairs (OCHA) has warned, “requiring a long and costly food assistance operation”.

Threatened on all sides

Until recently, villagers said, they had all been living in the bush. A villager offered to show IRIN one of the places where they had been sheltering. This was a clearing, about 5km from the village, where a few women and children and one man were sitting outside half a dozen circular mud brick huts.

The huts were close to several families’ fields and were built to provide shelter during busy periods of the farming year.

The man, Eric Zouta, said 12 people were living there, including his wife and children, and the other villagers had similar huts scattered around the village.

“The moment the Seleka came they started killing people,” he said. “I brought my children to sleep here. There are no beds or mosquito nets, but it’s for their protection.”

“I don’t sleep here myself,” he added. “I go further into the bush and sleep on some straw.”

He said if he had slept with his children they would likely have been in greater danger.

The violence in his area seems to have started with raids by the Seleka but developed into violence between the Peuls and the Gbaya, the majority ethnic group in the area.

“The Peuls love their relatives the Seleka too much,” Zouta said, meaning there was an alliance between them because of their ethnic affinity; (many of the Seleka are Peuls or from related communities).

“When the Seleka came here the Peuls bought weapons from them and took their revenge on Gbaya who had taken them to court over land and grazing disputes.”

Many sources told IRIN that hostility had been growing for years between the semi-nomadic Peuls and other communities in CAR who accused them of allowing their cattle to graze farmers’ crops, while the Peuls accused the others of stealing their cattle .

A Human Rights Watch report last September documented attacks on civilians by Seleka allied with Mbarara (Peuls from Chad) in several prefectures. The report said it documented just a small number of the human rights abuses that had taken place and focused on Seleka violence rather than “common crimes”.

Zouta said it was “thanks to the anti-balaka that most of the Seleka and the Peuls have now been chased out of the area” and he might now be able to go back to his village. But he was not sure all the Seleka and Peuls had left and he feared that any still in the area might still seek their revenge.

To judge by the countryside around Bouar, a town in western CAR, Peul villages have been systematically destroyed and many of their cattle reportedly stolen or killed.

“Once the Seleka arrived it was impossible to work in the fields,” Zouta said.

“The Seleka can also go long distances in the bush. Once they came here on foot from 50km away.”

While some fields near Bessan had been recently harvested, the insecurity since early 2013 when the Seleka swept through western CAR, looting and killing, would have severely disrupted agricultural activity.

Villagers will have had a meagre yield from the last two seasons when they were unable to plant or weed their land properly. Zouta said he and his family had eaten all their seeds for lack of other food.

An inter-agency rapid assessment in January found that 94 percent of CAR farmers said they needed seeds and 78 percent intended to plant land this season.

The area around Bessan, in Nana Mambere Prefecture, has probably not suffered as much inter-communal violence as areas further north, near the border with Chad.

One head of mission of an international NGO in CAR, who preferred anonymity, told IRIN that cattle herders from Chad have been taking advantage of the security void to bring large herds over the border.

“They have been able to do whatever they want and for the past year they have been grazing farmers’ fields,” he said.

“West of Batangafo and north of Bossangoa many of the villagers are still in the bush and in the current security situation it will be very difficult for them to plant.” 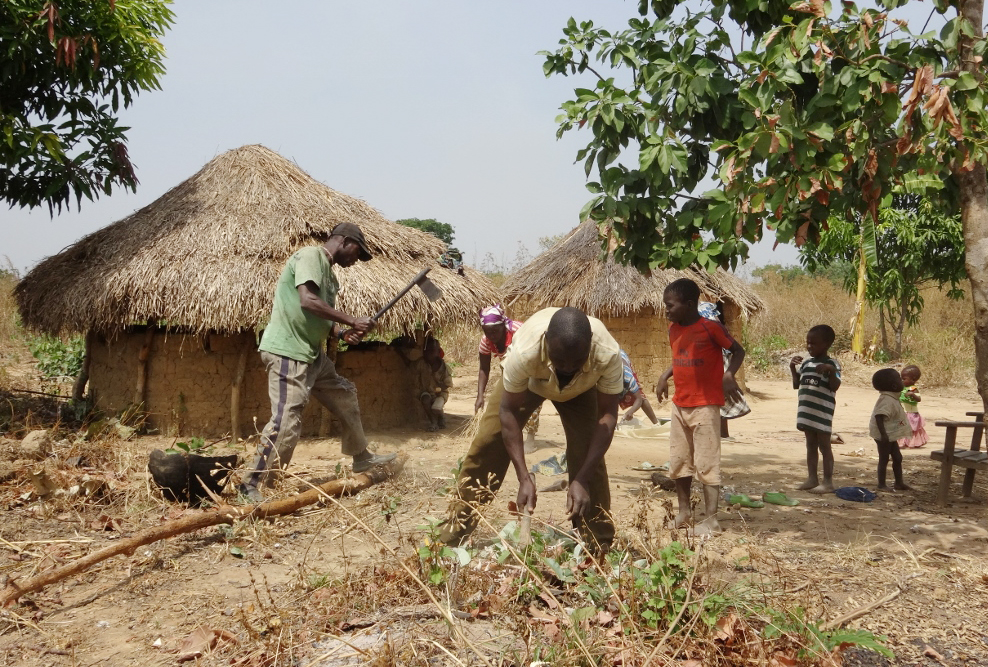 The head of mission of the Danish Refugee Council in CAR, Olivier David, said Mbarara are returning to this border area.

“Normally we can buy seeds in Kaga-Bandoro, but not this year,” said the NGO head of mission who preferred his identity withheld, “which shows how farming has been affected, as it’s a quality seed market for the rest of the country.”

Quality seeds are also not available in Nana Mambere, said Nicholas Kumaluta, head of the Mercy Corps office there. “It’s worrying given that the planting should be starting this month,” he commented.

The UN Food and Agriculture Organization (FAO) has an emergency programme to help CAR villagers plant enough crops this season.

The agency is appealing for US$45 million in 2014, of which about $16 million has already been mobilized for emergency and resilience programmes, FAO reporting officer Justine Texier told IRIN.

It is planned to distribute 1,800 ton of rice, maize and groundnut seeds, plus hoes, shovels and watering cans  to 76,000 households, she said.

“Part of the seeds are at the border in Cameroon and we are working on purchase orders for the rest. The longer we wait, the more the seeds will cost, as it will be enormously expensive to transport them by air.”

Insecurity has hiked costs and forced several changes of plan. The government was due to hold a round table discussion on agriculture with donors on 5 December, the day the anti-balaka launched their first offensive in Bangui.

“The initial plan was for NGOs to buy the seeds locally,” FAO emergency response officer Pierre Vauthier said, “but now they are all asking FAO to buy seeds for them.

“We have decided that most of the seeds will have to come from outside the country because quality seeds are lacking throughout CAR and we don’t want to drain certain areas.

“We will help the NGOs with seeds, logistics and evaluation.”

While a few NGOs have secured seeds from their own resources - (DRC for example has 13 tons stocked in Nana Mambere) - the bulk of what is needed has yet to be bought.

The relatively small number of NGOs in the targeted areas, and lack of donor funding for them, are constraints, Vauthier said.

Security is a critical issue. In December an FAO vehicle was hijacked by the Seleka on the main road from Bangui to Cameroon - staff were liberated after several hours.

At least seven staff with international aid organizations have been killed in CAR in the past year, including a Red Cross worker at Ndele last week. Médecins sans Frontières recently suspended its mobile clinics in rural areas of northern CAR.

“On 10 March we sent a truck from Bangui to Bossangoa [350km] with an escort provided by Sangaris [the French peacekeeping mission],” Vauthier said. “We were very glad of their support as this made the journey feasible.”

In the past month African Union troops have been providing escorts each week to a convoy of commercial vehicles from Cameroon.

A UN security adviser, Alexis Kamanzi, commented that aid agencies should only be using military escorts “as a last resort”.

World Food Programme trucks have been getting through to Bossangoa from Bangui in recent months, without military escorts, but security on many routes is unpredictable.

“It is absolutely vital to provide security in rural areas,” Vauthier said.