Laos has been growing at 8 percent a year over the past decade but rural areas, where most people still live, are being left behind in terms of access to safe water, sanitation and hygiene (WASH) services, health experts warn.

“People in rural areas still don’t like to use the toilet,” Soulivanh Souksavath, the World Health Organization’s environmental health technical officer in Laos, told IRIN. “It’s easier for them to go into the forest and defecate.”

Urban-rural gaps in clean water and sanitation are widespread in this landlocked, mountainous country of 6.7 million people, where nearly 70 percent of the population lives in rural areas.

In 2012, only 64 percent of people in rural communities had improved sources of drinking water and 48 percent had improved sanitation facilities, compared to 88 and 91 percent in urban areas, according to government statistics.

That same year, rural areas in neighbouring Thailand had 96 percent of people with improved sources of drinking water and 97 percent with improved sanitation facilities.

A 2013 UN and governmental report indicated that “poor sanitation and unsafe water are strongly associated” with malnutrition and diarrhoea, both of which are leading causes of death in children under five.

Still, poor sanitation and hygiene conditions, which can also pollute water sources, are linked to more than three million disease episodes and 6,000 premature deaths each year in Laos, according to a 2012 Water and Sanitation Programme report.

“If you invest in WASH, you reduce the costs in health,” Bishnu Timilsina, the country’s WASH section chief for the UN Children’s Fund (UNICEF), told IRIN.

“Not safe to drink”

Although Laos is on track to meet its 2015 Millennium Development Goal targets for access to improved water and sanitation (80 percent and 60 percent respectively), the status of services outside the cities is questionable.

“The biggest issue is water quality,” Souksavath said. “People have access to water but it’s actually not safe to drink.”

Since water treatment plants only exist in cities, rural communities often use gravity-fed systems from mountain springs or groundwater which can be contaminated, he said.

Incidents of arsenic poisoning  from groundwater have been known to occur.

“We have a lot of challenges right now because of the development,” Souksavath said, adding that the government should strengthen its capacity to monitor companies.

Most rural schools and health centres do not have access to WASH services, with some without running water, UNICEF’s Timilsina said.

A latrine structure being built by villagers in northern Laos. Open defecation remains a challenge in much of the country 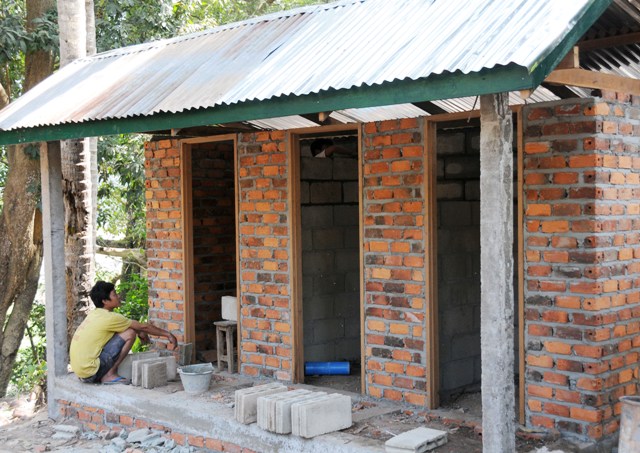 Traditionally, NGOs built water and sanitation projects to help remote areas but poor construction and lack of maintenance led to many of them becoming inoperable.

“In reality we don’t know what percentage of WASH facilities is still functioning,” Timilsina said.

“If an NGO comes in and builds a toilet, often the family won’t keep it clean or maintain it,” Mona Girgis, country director for Plan International said.

Under CLTS, NGOs hope to motivate villagers to change sanitation behaviours and construct their own toilets.

In addition, NGOs are trying to set up water user groups who will be trained to maintain local water systems, Girgis said.

However, government support has been limited as there is no specific government WASH policy that outlines who manages, maintains or funds certain projects in urban and rural areas.

“There’s no clear policy to guide who will be responsible for what,” Timilsina said, adding that UNICEF will support the government in drafting a policy in the next few years.

Most projects are being implemented by NGOs and foreign donors since skilled government technicians are in short supply.

Budget expenditure is kept secret, UN officials say. “We don’t know how much from the government is allocated for the WASH sector,” Timilsina said.

Nevertheless, government officials have ambitious plans to roll out water services and on-site sanitation treatment facilities countrywide by 2020 - expected to cost US$40 million per year.

“This is well above the current spending levels, estimated at around a quarter of the needs,” the UN and governmental report noted.

Plan International’s Girgis and others are working to get the Global Sanitation Fund, a pooled donor fund, to prioritize Laos and increase aid in this sector.

“We’ve been lobbying for some time but at the moment they are waiting for government invitation to do that,” she said.