Around 25 percent of villages in Laos are contaminated by unexploded ordnance (UXOs), mainly from US bombing missions between 1964 and 1973, according to the Lao National Unexploded Ordnance Programme, and while UXO casualties have fallen sharply in recent years there is little support for UXO victims, whose injuries can drastically affect their families.

“There are currently insufficient resources to meet the many needs of UXO survivors,” Earl Turcotte, the UN Development Programme’s chief technical adviser to the National Regulatory Authority for UXO/Mine Action (NRA), told IRIN.

There is a lack of disability aid and access to quality medical care, poor coordination between the government’s UXO and disability sectors, and a lack of equal rights and opportunities, UN officials say.

Furthermore, emergency medical care is lacking in this mountainous country - one of the poorest in Asia - where about 70 percent of the population live in rural areas, many with no accessible roads.
“If we want to help in a comprehensive way, it will require further strengthening health, education and related infrastructure, which will take time,” Turcotte said.

In 2012, the Lao government began a three-build pilot project to consolidate remote villages into development units, and help districts and provinces better serve their people, including with basic medical services.

The NRA is expected soon to finalize its first UXO victims’ assistance strategic plan to enhance medical and rehabilitation services for casualties, after the government collected data on the needs of more than 15,000 survivors.

However, the plan is only a guideline: It is not mandatory for ministries to include UXO victims and affected families in their limited budgets, campaigners say.

A row of prosthetic legs sit on display at a museum run by Cooperative Orthotic and Prosthetic Enterprise (COPE), a local NGO that provides free rehab services. Around 25 percent of Lao villages have been contaminated by UXOs, mainly from US bombing missi 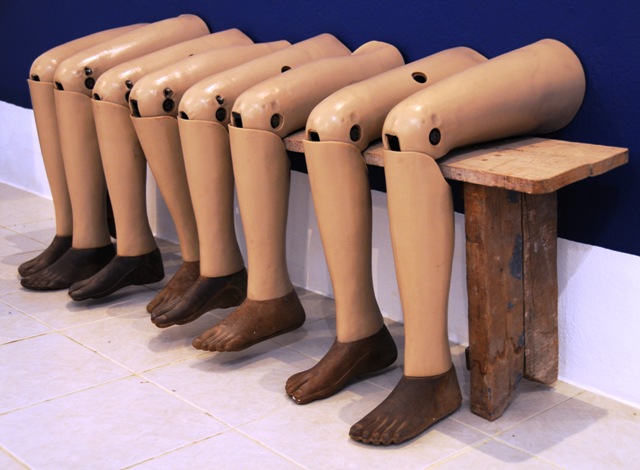 “There’s no safety net in Laos that other countries have,” said Colette McInerney, country director for World Education, an international NGO that helps survivors.“It puts more of a burden on their families to support them financially and emotionally.”

To improve assistance, campaigners say it is crucial to build up the state’s disability system and local civil society; the latter has only been allowed to exist since 2009.

“The sector is still very young,” Rouve-Khiev said. “[UXO victims] can find themselves in difficult situations where there are no answers in this country.”

The government’s UXO efforts are largely focused on land clearance and UXO risk education. More than 20,000 people, many of them children, have been injured or killed by UXOs since 1973, NRA says.