Despite a decreasing prevalence of HIV/AIDS among commercial sex workers, health workers say the stigma associated with prostitution and the harsh laws against it are undermining sex workers’ access to HIV-related services.

“Myanmar has made remarkable progress, given the limited resources it’s had [to combat HIV]. Resources are usually misspent by targeting the general community [rather than at-risk groups]. However, the country’s national strategy has included some very strong targeting,” said Eamonn Murphy, the country coordinator for the Joint UN Programme on AIDS (UNAIDS).

Myanmar currently allocates just 3.9 percent of its budget to health, but the figure will rise to 5 percent in 2014, which represents a fourfold increase since the end of military rule in 2011.

The Global Fund to Fight AIDS, Tuberculosis and Malaria resumed operations in Myanmar in 2011 and in September 2013 provided US$160 million for HIV services [until 2016] – an increase of $90 million.

According to the Myanmar Ministry of Health, there are 200,000 people living with HIV/AIDS, and approximately 15,000 people die of AIDS-related illnesses every year.

“Prevalence has been decreasing in all risk groups other than drug users,” Anne Lancelot, director of the Targeted Outreach Programme at Population Services International (PSI) confirmed.

Surveys reveal that in 2008, prevalence among sex workers stood at 18.4 percent, whereas 7.1 percent of sex workers were HIV positive in 2012.

While government data estimates that there are currently 60,000 sex workers in Myanmar, PSI puts the real number at closer to 80,000. The national HIV infection rate is 0.5 percent, making HIV/AIDS a concentrated epidemic, said Murphy, adding, “However there have been quite a lot of deaths due to a lack of access to treatment.”

The stiff penalties for commercial sex work contained in Myanmar’s Suppression of Prostitution Act (1949) are a major barrier to accessing HIV treatment. The punishment is one to three years in prison for sex workers, but clients are not punished under the law.

“Very harsh laws are in place against sex workers, instead of the mobilizers, the traffickers and the gangs who push women into sex work,” said Sid Naing, the country director for Marie Stopes, an international NGO working to improve sexual and reproductive health.

Even possessing a condom could be used as circumstantial evidence of prostitution until 2011, when the Ministry of Home Affairs issued a directive to the contrary, yet according to UNAIDS most of the public are unaware of the directive.

“People are still not comfortable about carrying large amounts of condoms because they could be targeted as sex workers,” PSI’s Lancelot noted. 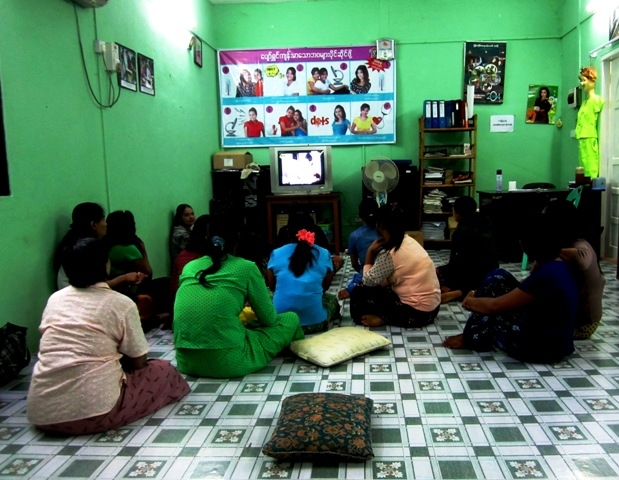 Another barrier to the prevention and treatment of HIV is the stigma surrounding commercial sex work - the word “prostitute” literally translates to “bad woman”.

“Myanmar isn’t like other countries where sex work is more organized, with red-light districts which are brothel-based. There’s a great deal of indirect sex work, such as in massage parlours and karaoke bars,” said Krittayawan Tina Boonto, the UNAIDS investment and efficiency advisor.

In 1998 an amendment broadened the 1949 legal definition of a brothel to include any place used habitually for sex. This was done in response to the growth of sex work conducted in karaoke bars and massage parlours, which frequently change locations due to harassment by police. The managers of these establishments often deny health workers access to employees for fear of prosecution.

Naing said as a result of this, trying to provide HIV services was “like trying to pin down a river. The next day you go back and the sex workers are no longer there.”

In July 2013, the founder of the Sex Workers in Myanmar network (SWIM), an advocacy group for commercial sex workers, Thuza Win, spoke in parliament about the legal barriers to accessing HIV services. “This government is so different from when I set up the network in 2009. I think the laws could even change before the 2015 [general] elections,” she said.

Naing agrees – up to a point. “The legislature has a number of promising members who are trying to raise the issue. But there are also very vocal conservatives, and many who agree in conscience but fear they will be seen as attacking traditional values.”

Sandar Min, an MP representing Myanmar’s main opposition party, the National League for Democracy, led by Aung San Suu Kyi, told IRIN, “My mission is to work out how to draft a new law so that there is more protection for HIV patients. But although I'm not ashamed to speak out, many others are.”

The policy officer for the Asia Pacific Network of Sex Workers (APNSW), Kay Thi Win, who is also the founder of the AIDS Myanmar Association (AMA), commented, “I’m not sure that Myanmar is ready to decriminalize sex work. However, before the 2010 elections, there wasn’t even any public debate. I think that with more advocacy... we may be able to turn the tide of opinion.”