Chor, 22, arrived hungry and dehydrated at Mingkaman, a small South Sudanese river town on the White Nile, after an eight-hour boat ride made all the more uncomfortable by the presence of a bullet lodged in his lower back.

On 31 December, rebel forces had streaked through his home town of Bor - about 20km to the north - shooting indiscriminately at civilians.

Chor had hidden beside his older brother under a bed in their family's house. The pair had returned there to collect belongings while the rest of the family waited by the river outside town.

Bullets shot by renegade soldiers hit his brother in the chest and Chor in the lower back. His brother died, but Chor survived to make the journey to Mingkaman, where he is seeking medical attention.

The capture of Bor came two weeks after a political power struggle between President Salva Kir and the deputy he sacked in July 2013, Riek Machar, turned violent in Juba. The unrest quickly spread to many parts of the world’s newest state.

According to the International Crisis Group, the conflict has claimed around 10,000 lives. Many victims have been civilians targeted according to their ethnic group (Kiir is a Dinka, Machar a Nuer).

Almost 400,000 people have fled their homes, one in 10 of them to neighbouring countries such as Sudan, Uganda, Ethiopia and Kenya, according to the UN Office for the Coordination of Humanitarian Affairs.

Recent violence has seen Mingkaman’s population swell eightfold to around 80,000, as people flock there for its relative safety and the growing presence of humanitarian agencies. Many of the new arrivals lack adequate shelter or regular sources of clean water and food.

Trees are scant and highly prized, both for the shelter they provide from the scorching heat and for the branches that can be used for hanging mosquito nets.

People crowd beneath every tree as far as the eye can see. Members of the host population say they are overwhelmed. Most permanent structures are either surrounded by crowds of the displaced or have been requisitioned for use by local emergency response teams. The situation is reaching a "tipping point", according to the NGO Plan. The population of the county has nearly tripled, from 47,000 to over 130,000, according to district authorities.

And the influx is not over yet. By 11 January, more than a thousand people were still arriving every day by boat from Bor and areas north of Bor, paying up to 150 South Sudanese pounds (US$30) per person for passage.

They killed a lot of people, chased people away, burned their houses, and took food and other items

Long wooden boats pull up in the small harbour each morning, bearing exhausted families and their belongings. Some bring nothing, having fled the violence in such a hurry, while others wade through the Nile's water bearing aloft mattresses and shade cloth. Residents of the camp stand anxiously on the bank, scanning the incoming crowd for lost friends and relatives.

A number of those arriving in Mingkaman say they recently fled Pariak, a town south of Bor. Their testimonies described looting and gunfire by men dressed mostly in military uniform.

"They started on Sunday [5 January]," says Daniel Baidit, who has travelled for two days to get here. "They killed a lot of people, chased people away, burned their houses, and took food and other items."

“There is acute human suffering in the country, with children and women bearing the brunt of the fighting," said Hazel Nyathi, acting regional director for Plan.

In Mingkaman, armed men in civilian clothing mingled among the IDPs. "They're killing women and children. I need this to protect myself and my family," one man said, holding an AK47 rifle at his side.

Most of the armed men are members of the Sudanese People's Liberation Army (SPLA) - the country’s now divided national army - who must return to fight for Bor. Unconfirmed reports of forced recruitment in the camp circulate, but the combatants IRIN spoke with all said that they chose to join up. Agencies are not reporting any major security breaches, and a UN source says the presence of the SPLA has not become a major concern.

Although young men are returning to their homes across the river in Jonglei State to tend to their cattle, guard their houses or fetch belongings, few feel that it is safe to do so. The sound of rockets and jet engines from Bor, which loyalist forces are poised to try to retake, reminds Mingkaman residents of their vulnerability.

"The fighting has started to target anyone," a humanitarian responder in Mingkaman said.

When people flooded into Mingkaman at the end of December, "90 percent went to the river and drank the Nile water", a Médecins Sans Frontières worker says. "Food is still a big concern, and it gets very cold at night".

Achol Lual with her one year old son, Deng Maker, who is suffering from diarrhoea, fever, and a rash around his mouth, sits in an MSF clinic set up at an informal settlement of internally displaced persons in the town of Mingkamen in Awerial county, South 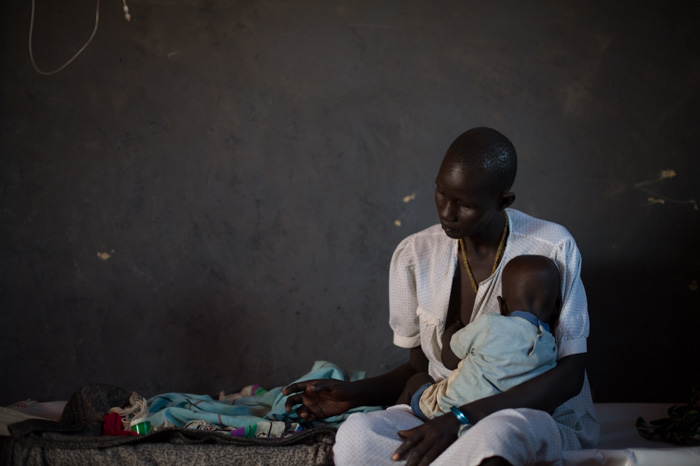 The poor sanitation has given rise to fears of a cholera outbreak. Nile water is now being chlorinated, and there are out-patient and in-patient clinics in operation. The International Committee of the Red Cross has sent a large convoy of trucks with supplies from Juba, around 140km south on a bad road.

The UN Humanitarian Air Service has resumed helicopter flights, and some of the NGOs that left are starting to return.

"Resources are stretched thin in a place where resources were thin to begin with," said one aid worker.


The situation is little better in the capital, Juba, where 17,000 people are living inside the United Nations peacekeeping force's military base, on an area suitable for less than a quarter that number.

"When you're battling heat and insufficient amounts of water and toilets, it's a recipe for disease and tension. They're literally sleeping side by side each night," the Humanitarian Coordinator in South Sudan, Toby Lanzer, explained.

Already, the UN is preparing to relocate these people to a more appropriate space, should they still be there when the rains come in April. "If we get to April, we've got a very serious situation. There is water and mud everywhere. If we were to have tens of thousands there in the rainy season, it would be untenable," he said.

A month of violence has also threatened food security across much of the country, according to the Food and Agriculture Organization (FAO).

"It is essential that security and stability return to South Sudan immediately so that displaced people can return to their homes, fields, herds and fishing grounds. Timing is everything; there are fish in the rivers now, pastoralists are trying to protect their herds, and the planting season for maize, groundnut and sorghum starts in March," Sue Lautze, FAO representative in South Sudan, said in a statement.

"Even before the recent fighting… some 4.4 million people were already estimated to be facing food insecurity in South Sudan in 2014. Of those, 830,000 were facing acute food insecurity," said Dominique Burgeon, director of FAO's emergency and rehabilitation division.