Before a car accident injured him, 45-year-old Vanlathanga worked as a labourer cutting timber in the mountains of northeast India’s Mizoram State. Like many migrants from neighbouring Myanmar, he had left the grinding poverty of his village in Chin State and crossed the border to India, attracted by the prospect of earning some money.

There are more than 100,000 undocumented Chins in India. Some are driven by political oppression and discrimination, while others due an acute lack of job opportunities back in Myanmar.

Those who wish to apply for asylum must make their way to the UN Refugee Agency (UNHCR) in New Delhi, some 2,200km away, where approximately 7,000 Chins are registered
as refugees.

The Chins, a largely Christian ethnic minority, are often forced to seek employment in the informal labour sectors in Mizoram, where they can be exposed to abuse by employers who hire them for arduous and dangerous work, knowing that those abuses will often go unreported, migrants and experts say.

“We are the people in between. We cannot go back to Myanmar but we also don’t belong in India,” Vanlathanga’s wife, Nguntincuai, told IRIN. A 2011 report by a coalition of international organizations found that many government and private employers in Mizoram require proof of Indian citizenship before they will give someone a job.

Research in 2005 by the Human Rights Law Network, based in the Indian capital, Delhi, found that “the majority of the Chins in Mizoram end up as cheap labour in domestic work, road constructions, agriculture work, including timber sawing in jungles, roadside vegetable vendors, scavengers in the jungle for roots, tubers, leaves and herbs,” or sometimes earn a living as street vendors.

Chins in India can often find only dangerous and gruelling work, have limited recourse to relief from abuses, and receive only piecemeal support from church groups and NGOs, all of which curtail their ability to survive in India, experts and migrants say.

In September 2012 a car hit Vanlathanga while he was working beside a road in a forest. He was hurled into the air and when he fell to earth his leg broke so badly the bone was exposed. He needed emergency surgery to repair his broken leg and had to stay in hospital for more than a week. A year later he is still unable to walk properly and cannot return to work.

Nguntincuai, 43, who came to India shortly after the accident with their three daughters, now supports the family by selling homemade chapatti flat bread to truck drivers passing through Aizawl, the capital of Mizoram, on their way to the Myanmar border.

Like Vanlathanga, she cannot find “official” work in the formal sector. “It’s physically exhausting [making and selling the chapattis] and very difficult to bear. We have no time to chat or play with our children,” Nguntincuai said.

She wakes up at 2 a.m. to prepare the bread and by the time she returns home from selling it her children have gone to school and Vanlathanga is already busy rolling out the dough for the next batch of chapattis. They can earn up to US$20 per week, - barely enough to survive.

45-year-old Vanlathanga worked as a labourer cutting timber in the mountains of northeast India’s Mizoram State before being injured in a car accident. Today he helps his wife roll ball of dough in their one-room house in the city of Aizawl. Thousands o 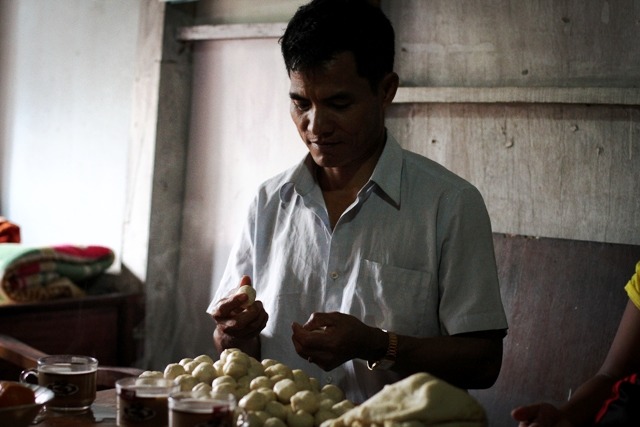 No way to complain

Vanlathanga said his employer often abused him with threats and by withholding his wages, but he never reported it to the police for fear they might deport him. After the accident, the employer cut all contact with Vanlathanga, even though he is still owed $100 in unpaid salary, perpetuating a legacy of abuse and exploitation.

“If [the boss] didn’t pay us we could not say anything. We were afraid we would be arrested and sent home,” Vanlathanga said. The supervisor routinely withheld pay from the 20 Chin migrants he employed because he knew their undocumented status in India meant they were unlikely to complain to the police. The international NGO coalition said this led to “chronic economic insecurity and unstable lives”.

A 2009 Human Rights Watch report found that many Chins in Mizoram experienced discrimination and rarely found stable employment. Those who did find work were often in “exploitative and abusive work environments”, the report noted, highlighting that Chin children as young as 14 were working on farms or in factories.

“We rely on each other… we have no other choice, there is no one to turn to,” said David Ngun Lian, president of the Chin Refugee Committee, an NGO in New Delhi. In the absence of support from the state or international agencies, many Chins in India turn to small local NGOs and church groups for support.

Zo Sangbuii, the president of the Women’s League of Chinland, an organization which helps arbitrate disputes between Chin migrants and their employers, among other thing, said, “We go to the employer and try and discuss better conditions [for Chin employees].”