To accommodate the population’s needs, a market has sprung up along the main road at the entrance to the camp, extending over several kilometres, with grocery stores, clothing boutiques, restaurants, bakeries, cafés, electronic shops and barbers all available.

This frenzy of commerce has spawned winners and losers, buyers and sellers, haves and have-nots, honest traders and outright thieves.

Such divisions have fuelled resentment, particularly as those better off are viewed as taking advantage of the aid system at the expense of those living at the edge of survival, in an environment with very little security or regulations.

There are more than 2.1 million Syrian refugees across the Middle East, and the UN expects these numbers to continue rising steadily into next year.

At a small shop made of tin sheets laid on wooden sticks, Muhammad al-Hariri sells second-hand clothing for 1-2 dinars (US$1.40-$2.80) per piece.

“It is for desperate people who need anything to cover their bodies, when [the clothes they came with] get worn out,” he told IRIN.

Just a few metres away, Ashraf Khalil sits inside a “caravan”, a pre-fabricated trailer, which he bought and converted into a store for men’s clothing ranging in price from 8-20 Jordanian dinars ($11-28) per piece.

“Some people can afford to buy this. It is cheaper than any shop in Amman [the Jordanian capital],” he said, flipping through TV channels as a fan - a rare luxury in the camp - circulated air.

A Syrian refugee in Jordan's Za'atari camp turns his caravan into a shop selling perfumes. A market economy has sprung up in Za'atari camp, now home to some 120,000 Syrians 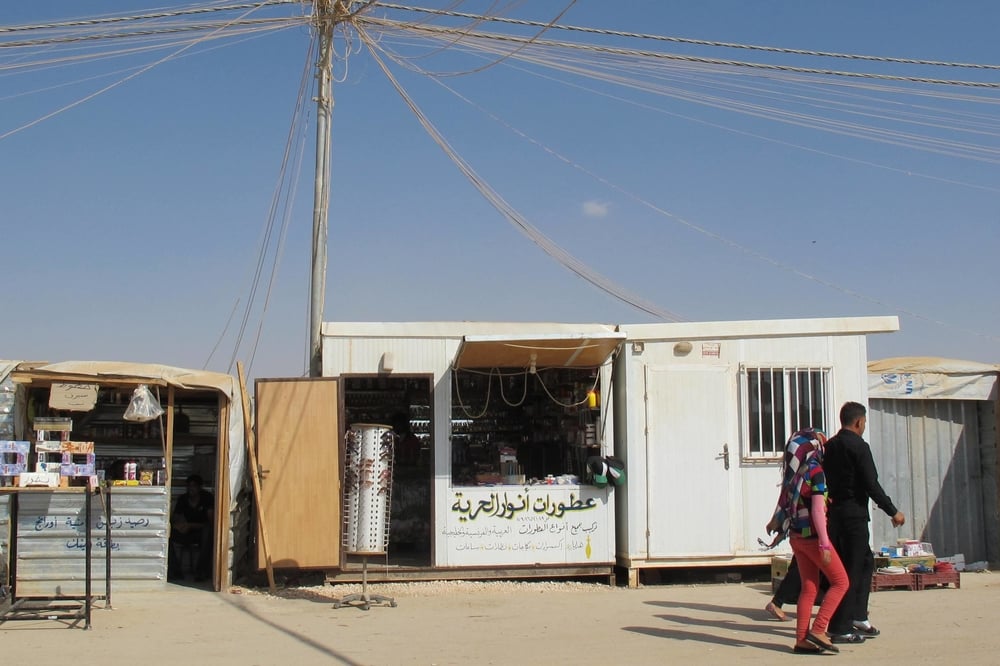 Refugees say those who arrived last year snatched up the market’s best pitches and now rent out their shops or even sell “their” spaces to other merchants. Everyone receives the same assistance and medical care from aid agencies, but some refugees also make money, while many others do not.

“You can say we are living in a jungle. The strong eats the weak,” he told IRIN.

Tents, caravans, toilet seats, blankets, along with other donated items are openly on sale in Za’atari camp. Caravans donated by Gulf States were meant to replace UN tents, which are more vulnerable to the elements, but there were not enough for everyone.

If they move out of the camp to live in Jordan’s towns and cities, refugees are supposed to return their tents or caravans to the UN Refugee Agency (UNHCR). Instead, some caravans sell for as much as 200 dinars ($282), Abu Dias said.

While some poor Syrian families cannot afford to buy them, others have more than one.
“Some refugees sell their [registration] cards (entitling them to assistance) before they return to Syria,” said Kilian Kleinschmidt, who manages the camp on behalf of UNHCR. “Others use them to get more assistance, including caravans, and then sell them.”

Abu Lina Hourani, who used to be a trader in Saudi Arabia, furnished his three purchased caravans with rugs, a satellite television, a fridge, a washing machine and a cooker. He placed the caravans in a U-shape to create a “garden space” like the one at his house in Syria. He made a bathroom out of bricks, complete with a toilet seat.

“We are not here because we are hungry or poor. We just need a safe place. I want my daughters to sleep in dignity and have a private space to hang out,” he said as he locked the metal gate to the three caravans. His son now runs a small business transporting things like yogurt in a refrigerated truck.

Abu Dias estimates there are at least 50 currency exchange places at Za’atari in addition to his own. He said many Syrians come to Jordan with “a lot of money”, and some use it to start businesses in the camp. Many Syrians, especially those originally from the governorate of Dera’a in southern Syria, have relatives working in Gulf Arab countries who occasionally send them money.

“This contributed to the class division,” he noted.

"You can say we are living in a jungle. The strong eats the weak"

In order to buy vegetables, dairy products and poultry, refugees sell food donated by WFP to shop owners in the camp, who sell it to Jordanians. This practice is legal and happens in many refugee camps around the world.

“Syrians come from a relatively middle-income country, so they do not eat beans and rice every day,” Jonathan Campbell, a WFP emergency coordinator, told IRIN.

“We are not exploiting our people. We are just helping them out,” said Abu Fawzi, the owner of a shop selling aid, including food, kitchen sets and hygiene kits which he has purchased from Syrians. “They can use the money to buy things they can actually need.” Jordanian merchants then come to the camp to buy from him wholesale.

Last month, WFP introduced a voucher system, which refugees can use to purchase things from two shops run by community-based organizations.

Shop owners do not pay taxes or electricity bills, but goods in Za’atari are sold at the same price as in other markets in Jordan, and sometimes even higher, refugees say, especially vegetables and fruits.

Many refugees feel they are being ripped off by the merchants, who don’t pass on the savings accrued by not paying tax or electricity to their customers. Refugees cannot exit the camp unless they are “bailed out” by a Jordanian citizen (though security officials and aid workers say many of the well-connected refugees find ways to smuggle people and materials in and out of the camp). As such, their customers largely constitute a literal captive market.

“They [refugees who earn income] stand in the same line, just like us, when there is any kind of distribution: food, clothing, whatever - you name it,” said Amina Zubi, who came to Jordan with only her children and what she was wearing. “They are using their brothers and sisters instead of supporting them.”

To be able buy groceries from the Za’atari market, Zubi sends her 13-year-old son to work.

He stands with a wheelbarrow in the middle of the market, offering to wheel purchases or aid materials to residents’ homes. Depending on the distance of the trip, Mohammad Kahir earns between 0.50 to 2 dinars ($0.70-$2.80) per trip.

“We have to live. We cannot eat bulgur and lentils every day,” he said.

Hourani disputes Zubi’s suggestion that refugees who are relatively well-off are taking advantage of the aid system when they benefit from the free services. “This assistance is ours. Why should we spend our money?”

The market does, of course, have a benefit. It is the only place where refugees can buy items that are not provided by aid agencies, such as fruits and vegetables, meat, Syrian spices and desserts. And for many, the market is simply a reminder of the normal lives they were leading in their home country before the war.

“Although it is located in the middle of the desert, it has the feel of the market in Dera’a,” one refugee said, referring to the southern Syrian city from which many of the refugees originated.

There are also camp residents who acknowledge they benefit from more affluent refugees’ enterprises. Some earn a decent wage, for example.

A market economy has sprung up in Jordan's Za'atari camp, now home to some 120,000 Syrian refugees. Here, food distributed by the World Food Programme is sold in one of the market's many shops 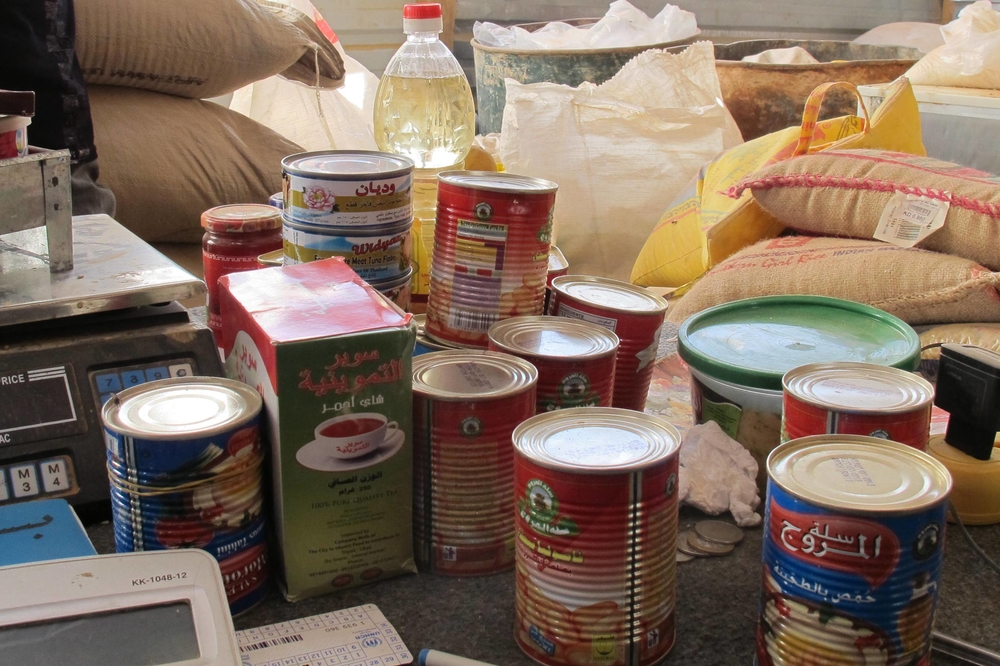 One waiter said the restaurant that employs him earns about 200 dinars ($282) per week, selling sandwiches and grilled chicken.

Another Syrian, who also spoke on condition of anonymity, said he earns about 15 dinars ($21) per day from working at a café owned by a “rich” Syrian refugee living outside the camp.

“It is good money, especially when you do not have to pay for rent or anything else,” he told IRIN.

In addition to the different social classes in the camp, refugees say some residents have formed mafia-like groups involved in organized crime in the camp.

They say a small minority of the camp’s residents create chaos in the camp - by rioting and attacking security officials, aid workers or other refugees - because they benefit from the insecurity by stealing and re-selling aid items, like caravans, tents, and equipment from public toilets.

“Some have surrounded themselves by Shabihas,” said 20-year-old Issa Lafi, referring to militias supporting President Bashar al-Assad in the fight against rebels in Syria, “whom they hire to steal things from the camp at night and then sell them.”

In one night alone, 1,000 caravans were stolen, refugees and a security staff told IRIN, and police “do not dare do anything.”

Another senior security official, who spoke on condition of anonymity, told IRIN the camp can be very difficult to control.

Refugees “refuse to cooperate…When we try to stop cars smuggling Syrians to work in Mafraq, they start stoning us, even children.” On several occasions, refugees have stabbed Jordanian security forces or beaten them with sticks and stones.

UNHCR has long been worried about a lack of law and order in the camp.

“Of course, we have concern about how many people operate inside the camp with all these reports about mafias,” UNHCR’s Kleinschmidt said.

By improving the general management of the camp and introducing a governance structure, Kleinschmidt said that “hopefully” by the end of the year things will be “sorted out”.

The plan is to divide the camp into districts, complete with street names and local representatives, with whom aid workers can liaise.

“Strengthening local governance will help us ensure better control of each district in the camp.” At some, point shop owners will also be expected to pay for shop licenses and electricity bills, he said.