A significant number of men in Papua New Guinea (PNG) are prepared to be circumcised once they learn that this can reduce the risk of HIV/AIDS, opening the door to future interventions, say experts.

“I’m not circumcised, but if it can prevent me from getting HIV, I’m ready,” Bob Akara, 19, said in Gitanuga, a village of mainly subsistence farmers about 40km northeast of Goroka, the provincial capital of Eastern Highlands Province.

According to the World Health Organization (WHO), male circumcision (MC) performed by trained professionals in a sterile environment can reduce the risk of heterosexually acquired HIV in men by some 60 percent.

“It’s a relatively small percentage of the population,” Andrew Vallely, head of the Sexual and Reproductive Health Unit of the PNG Institute of Medical Research (PNG-IMR), told IRIN in Goroka.

While full MC may not be common, penile cutting (partial removal of the foreskin) is, though it is unclear whether the practice reduces the HIV risk.

Most men have their foreskin cut when aged 15-19 in a bush or village setting by a friend or family member, underscoring the need for a greater in-depth understanding of these practices to develop culturally nuanced HIV prevention policies and programmes, say experts.

“It makes you a better lover,”said Simon Gosisa, 35, adding that despite not having any medical training he cut back the foreskin of his friend in high school using a popsicle stick and a straight edge razor. “There was a lot of blood that evening.”

Using a popsicle stick and a condom, Simon Gosisa, 35,demonstrates how he would insert the popsicle stick under the foreskin to cut. Close to half of all men have received some form of penal cutting or another 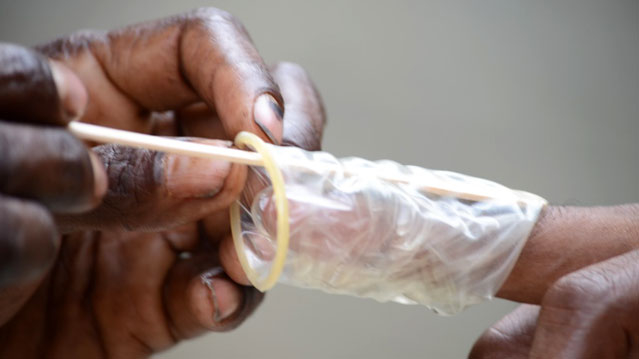 Another form of penile cutting is the practice of inserting ball bearings or beads under the shaft of the penis to enhance sexual gratification during intercourse, he added.

“Sexual gratification and hygiene are the primary drivers of such practices,” said Herick Aeno, a qualitative researcher for a masculinity study now being undertaken by PNG-IMR in Goroka.

Levels of acceptance “higher than expected”

According to a four-year study by PNG-IMR in collaboration with the University of New South Wales in four of the country’s 22 province-level divisions (Eastern Highlands, East Sepik, West New Britain and National Capital District), men cited four key reasons for agreeing to be circumcised: prevention of HIV and sexually transmitted infections; improved penile health and hygiene; cultural acceptance; and increased sexual pleasure.

A separate survey of over 860 men undertaken jointly by James Cook University, Pacific Adventist University and Divine Word University indicated that 71 percent of men with no penile cut were ready to be circumcised if it reduced their risk of HIV (an additional 13 percent stating “maybe”), while 84 percent who had already had their penis partially cut said they were willing to undergo circumcision.

“The levels of acceptance are certainly higher than we expected,” PNG-IMR’s Vallely said.

However, few men in PNG are aware that MC could reduce the risk of HIV, underscoring the need for better awareness and further studies.

According to the Ministry of Health, there are an estimated 34,000 people living with HIV in the country, with a prevalence of 0.8 percent. The main mode of transmission is through heterosexual sex (90 percent), followed by men who have sex with men.