When aid workers with the UN Population Fund (UNFPA) speak to women inside Syria - many of them displaced from their homes and living in cramped collective shelters - they say they would rather do anything than get pregnant.

“No one wants to be pregnant in the shelters… That’s universal wherever we go,” said Laila Baker, UNFPA representative in Syria. “There is no place to take care of the baby and it’s another mouth to feed.”

In addition, they fear the delivery process will face complications, as access to antenatal care and safe delivery services, including emergency obstetrics, is now extremely limited in the country.

Yet, UNFPA estimates that some 250,000 women in Syria and in refugee settings will become pregnant by the end of 2013.

After more than two years of conflict, Syria’s healthcare system has broken down, hospitals have been destroyed, medical personnel have fled the country, supply routes have been disrupted, and in many places, family planning tools are not readily available.

Fadia Salameh found out she was pregnant after arriving in Za’atari camp for Syrian refugees in northern Jordan. The medical centre in her home town in the suburbs of Hama, "which witnessed heavy shelling", had no more contraceptives in stock, so she stopped taking birth control pills.

"Our village ran out of everything - food, bread, and medicine," she told IRIN from the camp, where she sought help from a UNFPA clinic.

In 2012, UNFPA in Syria distributed nearly 1.5 million family planning pills, 40,000 injectables, 45,000 intrauterine devices (IUDs), and 21,000 condoms in governorates affected by the conflict. But the shipments are irregular and do not meet the high level of need.

Mobile UNFPA teams also visit shelters, providing women’s health care and distributing vouchers that women can use to get free maternal health and emergency obstetric services at a clinic of their choice.

The Syrian Ministry of Health has remained active throughout the crisis, and some maternity wards and teaching hospitals are still offering obstetric or maternal health care.

Internally displaced persons (IDPs) face additional challenges related to family planning and unsafe sex as a result of the crowded living conditions, especially in common shelters. UNFPA estimates there will be 1.65 million women of reproductive age living as IDPs by the end of 2013.

While they may not want to have children, displaced married couples do still want to have sex, even requesting that aid agencies set up what they called a “conjugal room” in one shelter in Rural Damascus, for privacy.

UNFPA has not yet been able to conduct a survey to establish the scale of the problem, but at least in the capital Damascus, a growing number of sexually transmitted infections (STIs) have been detected in routine visits to clinics, Baker said.

“We are really concerned that unwanted pregnancies and STIs may become an issue where they were not in Syria,” she told IRIN. “And when you do have an unwanted pregnancy or an STI, you do not [necessarily] have access [in Syria] to the care you need.”

Before the conflict, 96 percent of deliveries in Syria (whether at home or at the hospital) were assisted by a skilled birth attendant, but previously strong registration systems have since broken down.

As such, figures are not available, but Baker suspects maternal and neonatal deaths are also on the rise.

Partners told Baker of two women in the central city of Homs who died in recent months after giving birth without anaesthesia. The drugs had run out and could not be replaced because it proved too hard to get them across frontlines. Doctors operated on one woman post-mortem to save her baby girl. She is now four months old and being raised by her grandmother. The fate of the second baby is unknown.

Births by Caesarean section are 3-5 times higher than in normal conditions, Baker said: women schedule them in advance to try to avoid having to rush to hospital in unpredictable and often dangerous circumstances.

In one hospital in Homs, 75 percent of all babies are delivered using the surgical procedure. Women often have to walk or take the bus home within hours of the operation, because of general insecurity and fear of not being able to get home. Their husbands usually do not accompany them for fear of arrest while in hospital.

But even with the advance planning, they can run into problems. On 5 May, mortar shells reportedly hit the main referral hospital for maternal health in Syria, located in Damascus, seriously damaging it, just as one woman was lying on an operating table, prepared for a C-section.

As recounted to IRIN by Elizabeth Hoff, representative of the World Health Organization (WHO) in Syria who visited the hospital shortly after the shelling, the woman panicked, pulled out her catheter tube and I.V. fluid therapy, and ran. Two other women aborted in shock.

Women are admitted to hospital for no more than eight hours, because of the increasing number of patients and insufficient beds, Hoff said.

Late last year, WHO said doctors had been reporting a rise in “incomplete abortions”. Abortion is illegal in Syria, so instead women take pills that do not always work.

“They don’t see how they are going to face a pregnancy because of all the difficulties, and another child to cater for when they can hardly cater for those they have,” Hoff told IRIN at the time.

But just across the border, in the dusty, burgeoning Za’atari camp for Syrian refugees in Jordan, birth trends are quite different.

Many women say the camp conditions are "not suitable" to have children; an online campaign by the Syrian women's group Refugees not Captives calls on refugee women to postpone pregnancies until they return to Syria.

But others want to "compensate lives" lost in the conflict.

“We are not going to stop having children because of [the conflict],” said Um Ahmad, a mother of seven, while waiting in a queue to be seen by a doctor. Two of her brothers were killed, she said, “and that is why I want to stop using the IUD to give birth again… 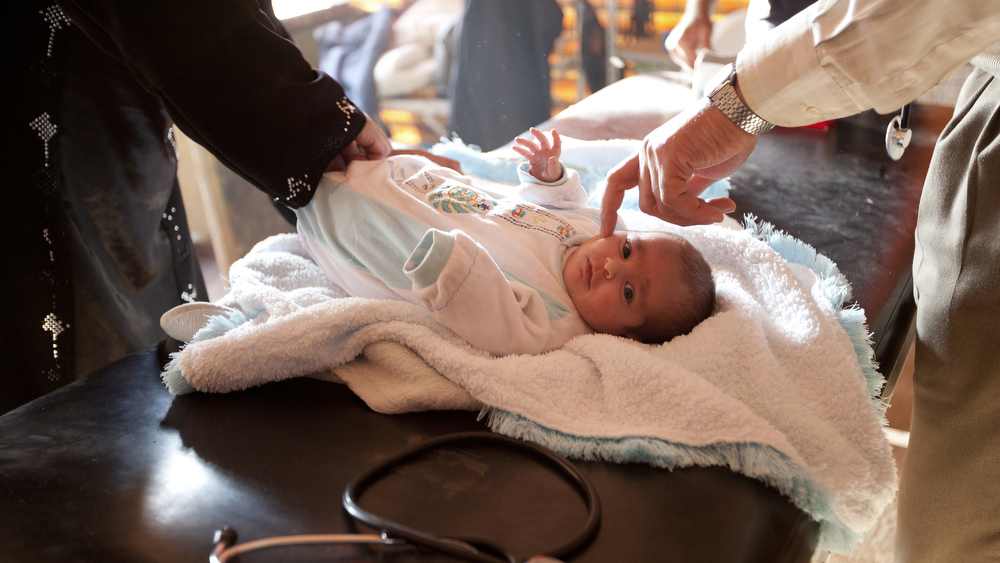 "If Syrians stop having children while [so many are being killed], the nation will vanish," she told IRIN.

Every day, a crowd of Syrian women and girls forms outside a UNFPA-supported reproductive health clinic, seeking advice on family planning and fertility, as well as pregnancy tests and health check-ups.

“We are recording high rates of pregnancies daily,” said midwife Munira Shaban. “[We do have] clients come to seek help as they want to become pregnant. The numbers increase as the camp grows bigger."

The clinic sees about 90 women a day, and one third of them come with pregnancy-related inquiries, whether they be tests or treatment, according to gynaecologist Reema Dyab.

All forms of family planning are available in the clinic, Dyab said, but "the demand for this service is low… Most of our patients have asked for help in treating problems preventing pregnancies, and the majority indicated they wanted to stop using contraceptives," she told IRIN.

Some women said they were pressured by their in-laws to have more children.

"They expect me to have more babies now, because my husband lost two of his brothers in the war,” said Um Khaled*. “I am expected to give them back all males that were lost.”

The clinic, run by the Jordan Health Aid Society, registered 58 pregnancies involving mothers below the age of 18 during the last week of February alone.

STIs have not broken out in the camp, but the chances that people are having unsafe sex are "high", Dyab said.

"Women tell us that their husbands refuse to use condoms, which is very common in this cultural context. Even if some people take condoms, it does not mean they are used correctly.”

Heather Lorenzen, a reproductive health officer at UNFPA in Jordan, said although it is challenging to tackle issues of sexual and reproductive health in the camp due to cultural sensitivities, aid agencies are trying to raise awareness. For example, UNFPA holds seminars about early marriage and family planning methods in the camp.

"This is an opportunity for women to learn about services available and decide what is suitable for them," she told IRIN.

She said it is important to compare the current situation with reproductive health norms in Syria before the conflict erupted.