Human rights groups are calling for a review of Myanmar's citizenship law, which has left more than 1.2 million people stateless nationwide, according to the UN Refugee Agency (UNHCR).

“The 1982 citizenship law should be amended to reflect basic principles of human rights, including equality and non-discrimination,” Debbie Stothard, the coordinator for Altsean Burma, a Bangkok-based advocacy organization for minority rights in Myanmar, told IRIN.

There are no reliable data on the number of stateless people in Myanmar; the last population census was conducted more than three decades ago, according to the UN Population Fund. But rights groups believe that in addition to some 800,000 stateless Rohingya in Myanmar's western Rakhine State, ethnic groups originating from China and India are also disenfranchised by the law, facing persecution without legal redress.

While all persons born on Burmese soil were considered citizens under the country's earlier 1948 citizenship law, provided one parent was Burmese, General Ne Win's seizure of power in 1962 led to policies that further excluded communities whose ancestors entered the country after 1823.

The constitution established by Ne Win in 1974 listed 135 “national races” - including the Karen, Shan and Kachin - while excluding all “non-indigenous” minorities.

Eight years later, the citizenship law, which recognizes only the children of national races as full citizens, was established, leading to limited rights for non-recognized groups such as the Rohingya.

Despite repeated calls for change, including a recent attempt to amend the law on 6 November 2012 by Member of Parliament (MP) Tin Mya from the Union Solidarity and Development Party, objections from other parliamentarians caused proposals for amendments to be shelved, according to Altsean.

“While the international community has [also] spoken up to the need to amend the law, there has yet to be a coordinated and concerted effort to ensure this actually happens,” said Stothard.

The discriminatory law may have helped fuel the sectarian violence that broke out between the Muslim Rohingya and the Buddhist population in Rakhine State in June and October 2012 and in the town of Meiktila in March 2013, said Chris Lewa, the director of the Arakan Project, a Rohingya advocacy group.

“The Rohingya have been constant victims of arbitrary arrests, extortion, harassment and fines due to their precarious legal status and laws prohibiting basic rights such as freedom of movement,” she said.

A group of young Burmese men wait to clear immigration at the Friendship Bridge at the Thailand-Border checkpoint in Mae Sot, Thailand. Thousands of men each year migrate to Thailand in search of work 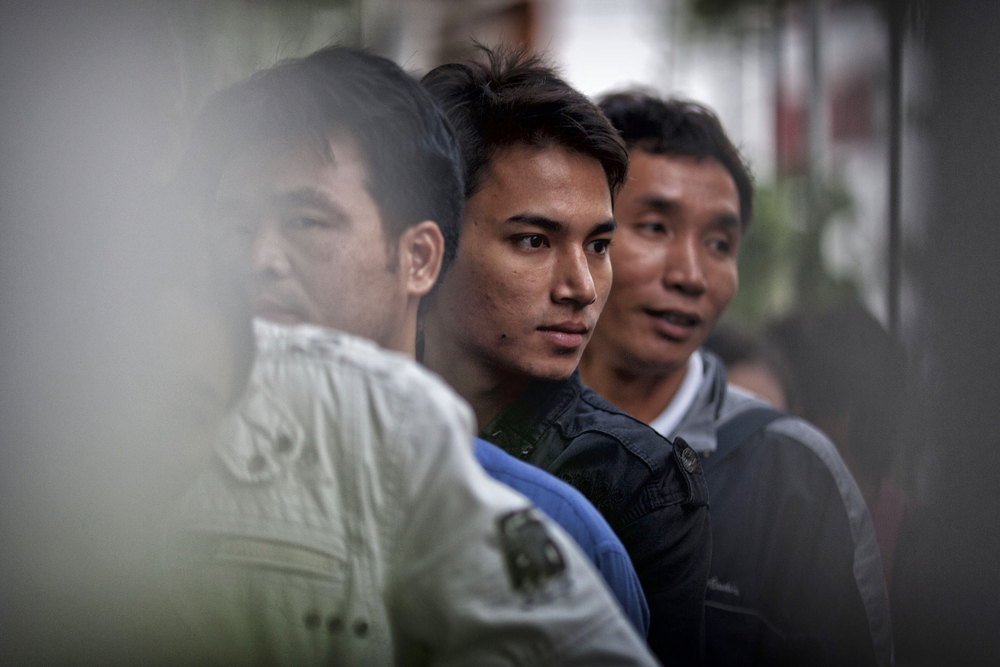 Since 2005, Rohingyas in Rakhine State - who must obtain permission to marry or travel outside of their villages - have been limited to having two children per couple.

But with access to birth control limited around the country, Burmese couples have an average of 4.7 children per marriage. The majority of Rohingya families continue to have more than two children, but are unable to register those over the limit or fear being penalized, says Lewa.

“These children are blacklisted and without any rights at all,” she explained. “They cannot even apply for permission for marriage, to go to school or to move outside of their village with their parents because, according to the authorities, they do not exist,” she added.

In November 2012, immigration police and the national army in the Rakhine townships of Pauktaw, Maungdaw and Sittwe attempted to register Rohingya families, issuing them temporary national residency cards (NRCs). But these efforts were met with opposition because the registration forms used the term “Bengali” to describe to the Rohingyas - a label referring to their South Asian heritage, used to emphasize their perceived foreignness.

“It is very controversial as they deserve full citizenship, not just temporary residence, which gives them no other rights, and they are afraid that if they sign the documents then it will be proof that they are non-citizens,” said Lewa.

Additionally, to receive the NRC, families must prove they have lived in Myanmar for three generations, but many Rohingyas lost evidence of this in the recent sectarian violence, which destroyed up to 4,800 buildings, according to HRW, and forced over 125,000 to flee their homes.

Myanmar has undergone significant reforms since March 2011 - including the easing of media censorship, the release of hundreds of political prisoners and the reshuffling of the country’s cabinet. The European Union subsequently lifted sanctions on Myanmar on 22 April 2013.

But rights groups fear international pressure to create an inclusive and fair citizenship law will cease to be effective.

“We are worried that the rights of Rohingya and other stateless people will continue to be set aside in the international euphoria over Burma's reforms,” said Alstean's Stothard.

“The commission missed a critical point when it failed to include reform of the 1982 Citizenship Act to strip out discriminatory provisions and ensure that the law complies with international human rights standards,” said HRW’s Robertson on 29 April.