Rajina Mary, a 38-year-old widow and mother of four looks at her new home in Sri Lanka’s northern former conflict zone as if admiring a long-lost relative. But in reality, the home’s mostly unplastered walls bruise anyone who leans on them too hard, and there are large holes in the walls for non-existent windows and doors; the floor is cemented only in the living area.

No one wants to stay indoors between mid-morning and late-afternoon because the house heats up like a furnace due to asbestos roofing sheets.

“I need a ceiling,” Mary told IRIN without removing her gaze from the home’s skeleton. But she is still proud, knowing that she is an exception among 135,000 returnee families to be in any type of permanent housing - even if unfinished. “It may not be much, but it is my house. My new house.”

In neighbouring Ambankulam village, Maheswari Selvadorai, 39, ran out of money to finish her home, which her family started building in 2009 after they left a camp for displaced persons. Her family now retreats behind the unfinished home to a shed with tin roofing and mud walls, where they feel safer. “The doors and windows are still not secure, so we sleep in the old house,” Maheswari said.

For these two women and their families, the two-and-a-half years it took them to get into permanent housing was a relatively short period. Tens of thousands of other families are facing an indefinite wait, say aid workers.

Donors and the government have pledged to build or repair a total of around 78,000 homes, of which the Indian government is funding 43,000. The International Federation of Red Cross and Red Crescent Societies (IFRC) estimates war returnees need 170,000 homes.

For homes financed by the Indian government future occupants receive US$3,800 in instalments, based on their construction progress.

The spokesperson of the Indian High Commission in Sri Lanka, Birender Yadav, told IRIN the goal is to build 10,000 homes by August 2013.

But this still leaves tens of thousands in need of housing, said Mahesh Gunasekera, IFRC’s senior programme coordinator for northern Sri Lanka, which is overseeing 20,000 new housing constructions, the most of any group working in the north. “I have not come across a major project with this level of funding difficulties.”

Gunasekera, who has worked on similar projects in Pakistan, Sudan and Nepal, calculated 129,000 homes must be constructed anew, while another 41,000 need “extensive” repairs.

Newly returned villagers survey the destruction in the Puthukkudiyiruppu area, Mulaittivu District, where fighting was intense 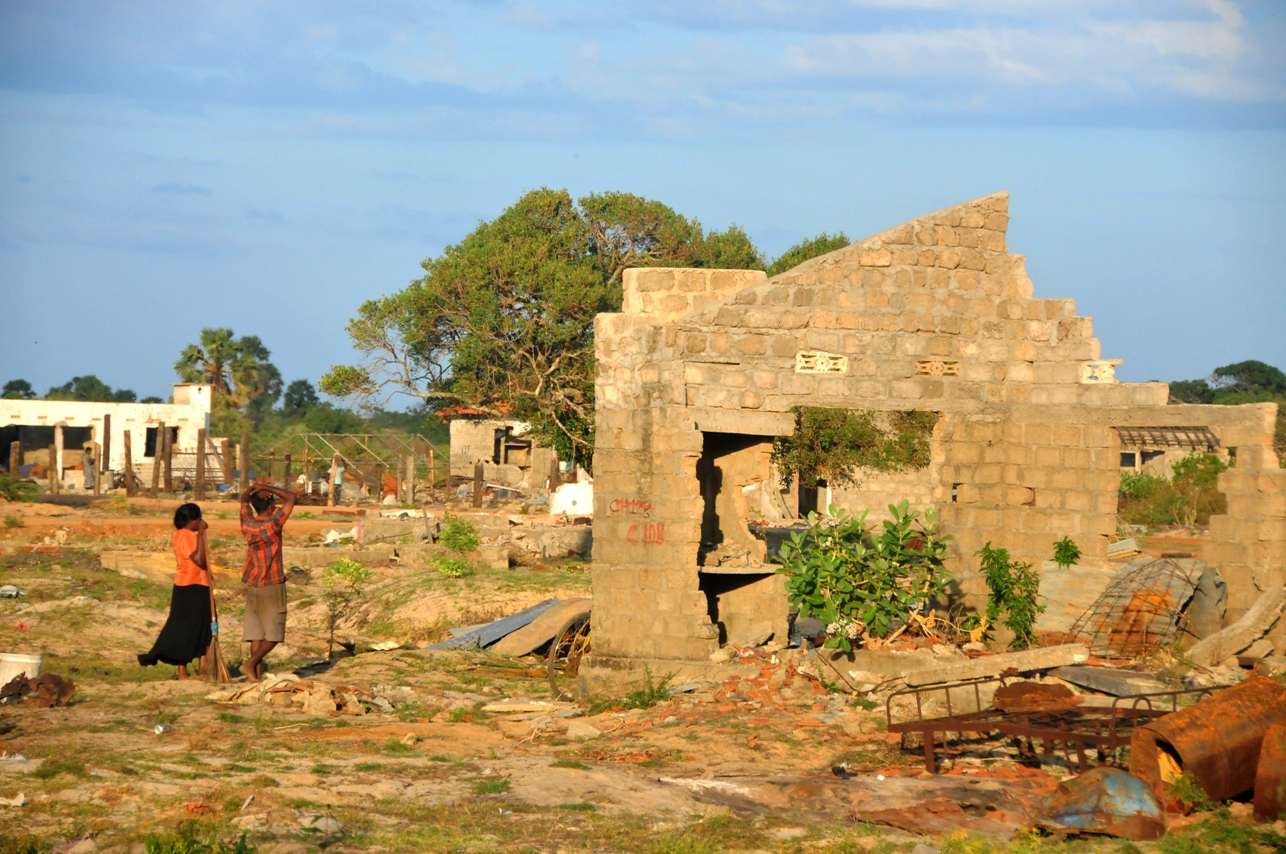 Construction of some 21,000 homes was completed as of 30 September and was under way on nearly 4,100 others, based on the most recent figures available from UN Human Settlements Programme (UN-HABITAT). Major repairs were completed on nearly 5,800 homes. About 550 “core houses” - basic, habitable structures, which occupants can later expand - were completed.

The IFRC’s estimate of the north’s housing needs do not cover the some 100,000 refugees expected to return from India, said Gunasekera.

He said IFRC expects them to return once the north reaches some level of normalcy. While not likely to happen “anytime soon”, the agency’s concern is that if and once housing is completed for current returnees, another wave will arrive.

According to Indian government figures, there are more than 100,000 ethnic Tamil Sri Lankans in the southern Indian state of Tamil Nadu.

“Housing has always been a top need, even before the first returns began,” said Roopavathi Ketheeswaran, the top government official in Kilinochchi District in Sri Lanka.

Meanwhile, returnees Mary and Selvadorai are questioning whether the cost to get into their new homes is worth it. Maheswari pawned $2000 worth of gold jewellery to a local bank to pay housing contractors. (A household’s average annual income is a little over $3,200).

Each took out $2500 in loans to supplement the $3,200 they each received from IFRC - which still turned out to be insufficient to build back to what they had before the war.