“Millions of people are already facing massive food shortages and very high prices in their local markets. And as we get closer to next year's harvest - and particularly during the three 'hunger months' from January to March - we are concerned that even more people will be unable to find food or will be unable to buy whatever is available, with prices continuing to rise,” WFP Country Director Kevin Farrell told IRIN.

Makena Walker, WFP spokeswoman in Harare, noted: "Zimbabweans in the cities have been hard hit by shortages and the little food that is available is sold at black market rates, which the majority cannot afford. As it is, we are feeding two million people across the country, but we expect that number to increase to 2.8 million by the end of this month." 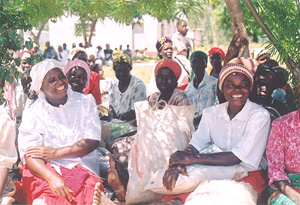 Zimbabwe accounts for about two-thirds of WFP's US $311 million regional appeal.

Originally it was thought 5.5 million Zimbabweans would need food assistance by early next year, but the figure was based on an assumption that the government would be able to meet its commercial import targets. Zimbabwe's severe foreign exchange shortage means that WFP is now projecting a higher figure.

"We have only received 40 percent of [the US $197 million] Zimbabwe appeal we made in July and there is nothing in our pipeline for cereals from March onwards. Many people in the rural areas are already eating wild fruits," Walker added. As with last year, when WFP fed 6.7 million Zimbabweans, the agency's food rations target the most vulnerable in each community - the elderly, widows, woman-headed households, orphans and people living with HIV/AIDS.

For the rest of Zimbabweans, the state-run Grain Marketing Board (GMB) is supposed to supply the staple maize at a subsidised rate. However, commercial imports of grain by the GMB have been squeezed by the foreign currency crunch, and supplies to its depots across the country have been at best erratic.

Shortages of basic commodities at the government-controlled prices have forced most Zimbabweans to rely on the black market, where prices are at least double. The food crisis - a result of drought, the government's land redistribution programme and HIV/AIDS - has been compounded by Zimbabwe's sharp economic decline, which has sapped the ability of rural and urban households to cope. The inflation rate is currently 469 percent, and unemployment at 70 percent. 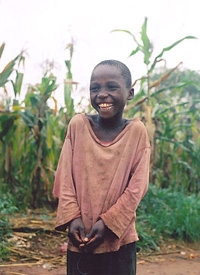 "The increasingly desperate situation in the urban areas will certainly create a bigger demand for relief food. It is therefore critically important that we get more food donations if we are to deal with the situation we expecting in the first three months of 2004," said Walker.

HIV/AIDS has added an extra dimension to the humanitarian crisis, robbing households of breadwinners, deepening poverty and magnifying the impact of poor nutrition. In Zimbabwe's second city, Bulawayo, erratic GMB grain deliveries ground to a virtual halt after May.

"Between January and May we could chance upon some deliveries to the local shops, but even then it was difficult, because that was the time when war veterans were in charge of the process and were demanding the production of ruling party cards before one could buy. Somehow we managed to survive by buying the cards to get access to the grain," mother of six, Anna Mguni, told IRIN. 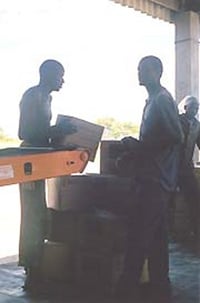 "After May, the deliveries became less and less frequent, forcing us to turn to relatives who had managed a little harvest in the rural areas. But that also dried up," she added.

Bulawayo Deputy Mayor Charles Mpofu, a member of the opposition Movement for Democratic Change, said the alleged politicisation of food was no longer an issue. "There is nothing left to politicise. Everyone is so concerned about finding the means of survival because the food is not there at all," he commented.

"While others can afford the black market rates, the majority are simply starving, with parents and elder children going for days living on porridge just to ensure that the younger ones can eat and survive. That includes mine," said Victor Chitongo, an unemployed father of three. Humanitarian agencies are already warning that Zimbabwe's agricultural production, which last year met only 40 percent of local maize demand, is unlikely to recover next season, even if there are good rains, due to critical shortages of farming inputs.

According to preliminary projections by the Seed Security Network of the Southern African Development Community, Zimbabwe faces a maize seed deficit of about 40,000 mt. The foreign currency shortage continues to limit the availability of other critical agricultural inputs, the most important of which are spares for the repair and maintenance of agricultural equipment, fuel and fertilisers.