A little past midnight on 9 September, Javier Ordóñez, a 46-year-old engineer and father of two, was stopped by police in the Colombian capital, Bogotá, for consuming alcohol in public. He was pinned down and shocked with a Taser multiple times over several minutes as he pleaded, “please, no more”. He later died in police custody after being further beaten.

In the days following Ordóñez’s death, protests swept Bogotá, leaving 13 people dead, hundreds of civilians injured, and 60 police precincts damaged – many of them set ablaze. It’s unclear how many deaths were at the hands of police, who beat protesters and fired baton rounds and teargas at them.

While there’s shock at what transpired, the country was primed for an outburst. Economic turmoil due to COVID-19, a long list of alleged security forces abuses, years of perceived governmental indifference, and a wave of massacres in August had all been provoking indignation well before the video of the Ordóñez incident went viral.

Colombia is one of the most unequal countries in the world. It faces a growing gulf between its middle to upper class urban elite and neglected rural areas that lack basic services like potable water and healthcare. Many stateless regions fall under the control of armed groups, and thousands of displaced people fleeing conflict end up living on the margins within cities.

As of the end of 2019, Colombia had 5,576,000 people internally displaced due to conflict or violence – second only to Syria – and it remains the deadliest country in the world for human rights and environmental defenders.

Colombia is second only to Syria in terms of conflict IDPs

The 2016 peace accords that nominally brought an end to the world’s longest-running civil war created high expectations to address these issues, Gimena Sánchez-Garzoli, an expert on Colombia and international humanitarian law at the Washington Office on Latin America (WOLA) think tank, told The New Humanitarian.

But many Colombians felt those hopes were dashed when deeply polarising 2018 elections ushered in a conservative administration that campaigned on dismantling the agreement, and has since slashed funding for its implementation, she explained.

Meanwhile, discontent has been rising over lack of public investment in healthcare, pensions, and higher education. According to a Colombian magazine, Semana, government investment in public universities has risen only two percent since 2000 when adjusted for inflation, while the number of students has quadrupled in that same period.

And since COVID-19 hit Latin America in March – Colombia has seen over 790,000 cases and almost 25,000 deaths – the economy has taken a big hit from punitive lockdown measures: The unemployment rate has also doubled to 20 percent, with the shutdown hitting informal workers – about 60 percent of the workforce – particularly hard.

“The combination of that has pushed everything into a real boiling point,” said Sánchez-Garzoli. “And so when you had this video surfacing of this person being Tasered by the police, I think that just sort of exploded all of the pent up frustration and rage with the government.”

While the most unruly protests have died down for now, labour unions are attempting to channel the energy into a more organised form. As recently as this past Monday, they led a demonstration in which thousands of protesters walked and biked to the city’s centre, where there were reports of rock-throwing, a bank break-in, and the use of tear gas by police.

Protesters on Monday shouted “Long live the National Strike”, an echo of the November 2019 protests: precursors to today’s demonstrations centred on anger at official corruption and proposed pension cuts – a fledgling movement cut short, at least for a while, by the pandemic.

Sergio Guzmán, a Bogotá-based political analyst, told TNH that the government's response last time – of discrediting the protesters and a “kick the can down the road” strategy in terms of addressing underlying social issues – is unlikely to change.

“I find myself marching today for life, and for everything that has happened in my country, such as the massacres and all the deaths that go unpunished daily,” Jesus Rojas Cano, an 18-year old industrial engineering student told TNH as he walked his bike to Bogotá's central Bolivar Plaza on Monday amidst chants of: “The people will not give up!”

The police were reprimanded by Bogotá’s liberal mayor Claudia Lopez earlier this month for the overuse of force, but the federal government for the most part has praised the police and portrayed the protesters as props of left-wing guerrilla groups and political opponents.

While the country’s conservative president Iván Duque said he would investigate the deaths and would not tolerate abuse by security forces, he also dressed up as a police officer to visit damaged stations in an apparent show of solidarity.

Guzmán said the government’s lacklustre response threatens to further radicalise the movement, especially if demonstrators feel their concerns are not being heard.

While the primary demand to emerge has been police reform, Guzmán said the protest movement – like last time – risks becoming fragmented by unclear goals and undefined leadership.

Sánchez-Garzoli predicted that the protests might unify around a demand for Duque to resign, similar to what happened last year in other Latin American countries such as Chile and Ecuador.

But Duque, who faces enormous pressure from his Democratic Centre party to stick up for the security forces, is unlikely to bow to protester demands, while the opposition has little power to force his hand, said Guzmán.

What does have power is the Constitutional Court, which ordered the government in a landmark decision on 22 September to apologise for security force abuses and to restructure the police. Defense Minister Carlos Holmes Trujillo on Wednesday denied the presence of systemic excesses and said the government would ask the court to review the ruling. 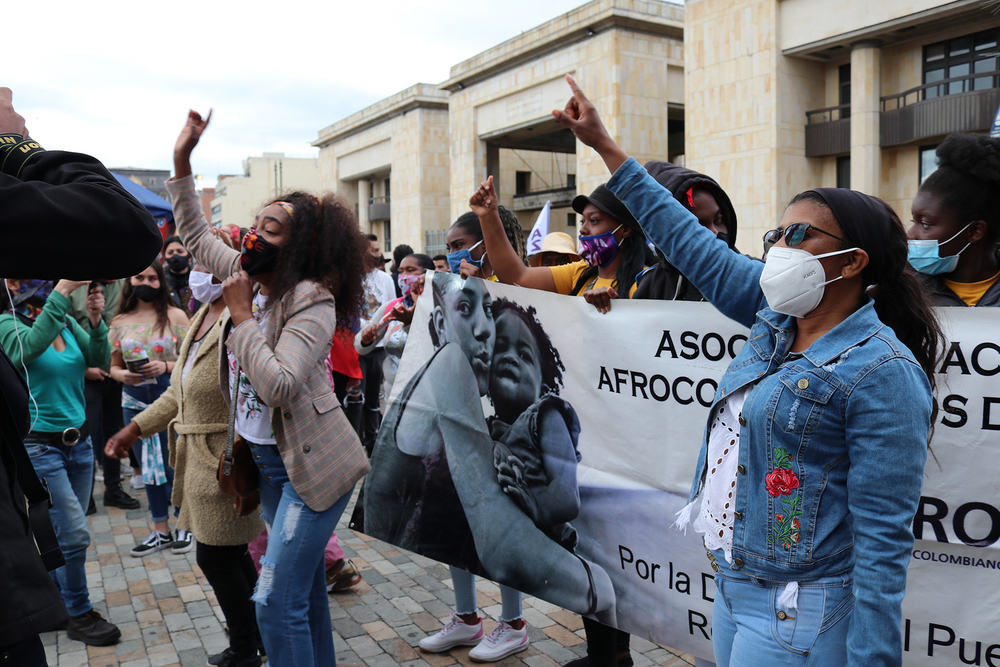 Genevieve Glatsky/TNH
Luz Marina Becerra (left), a board member of the National Association of Displaced Afro-Colombians, marching in the demonstrations in Bogotá. Becerra said she hopes the protests will lead to structural changes.

While many of the recent high-profile cases of violence have involved Afro-Colombian and Indigenous individuals and communities, and many of the social issues at stake disproportionately affect these populations, racism has not been a central focus of the protests, unlike in the United States.

“There’s always been this great blind spot about racism. And there’s always been, in terms of protests that involve non Afro-Colombians, or non-indigenous, always that blind spot too,” said Sánchez-Garzoli. “So it's never been part of those national level social movements that are non-ethnic. So it's not surprising that that's not the main focus here.”

“Facing any pandemic situation or any other situation that occurs in the country, we are always going to see the Black communities and especially Black women the most affected.”

It’s difficult to find evidence that police violence disproportionately affects Afro-Colombian or Indigenous citizens because police data doesn’t include racial breakdowns. But research shows that Afro-Colombians are 84 percent more likely to be displaced by conflict, and have around double the rate of infant mortality and hunger.

“Facing any pandemic situation or any other situation that occurs in the country, we are always going to see the Black communities and especially Black women the most affected,” said Luz Marina Becerra, a board member of the National Association of Displaced Afro-Colombians who marched in Monday’s demonstrations.

“I go out to march, but the demonstrations here in Colombia do not give me much hope. The hope that it gives us is that through the mobilisation of the demonstrations we can generate structural changes,” she said. “And what we most want to change is that culture of violence in which we have historically lived in this country.”