Fifteen months into Liberian President George Weah’s first term, a plunging economy has pushed up prices of basic goods and prompted thousands to take to the streets with a list of demands against a leader whose “change for hope” campaign slogan has become an object of mockery.

“The rule of law is not being implemented fully and people are suffering,” said Edna Gobah, 35, one of an estimated 10,000 protesters who converged on the seat of government in the capital, Monrovia, on 7 June.

Another demonstrator, 36-year-old H Bryant, was even more direct: “We’re in an economic crisis and there are looters in government stealing the country’s money!”

But the discontent goes deeper than immediate economic and governance grumblings.

Ellen Johnson Sirleaf was elected as the country’s first post-conflict president in November 2005.

Liberia’s Truth and Reconciliation Commission began operating three months later. In 2009 it published a report identifying the root causes of the war along with a set of recommendations on how to overcome them to avoid further conflict.

Read more: What is transitional justice?

Transitional justice is the name given to the process in which countries emerging from conflict or repressive rule address large scale human rights violations that their existing justice systems are unable to deal with. This can involve rebuilding institutions, reparations for victims, granting amnesties, and prosecutions.

Transitional justice is closely linked to reconciliation, although the two concepts are distinct. Reconciliation generally involves rebuilding relationships and restoring trust and is viewed as an outcome of effective transitional justice. It can take place at all levels of society, from between individuals to the state. An important starting point is acknowledging that violations have been committed in order to lay a path to forgiveness.

Included among the recommendations was the establishment of a war crimes court to try over 100 suspected perpetrators. It was never implemented. The absence of the court is often cited as the main reason for a perceived culture of impunity in Liberia, particularly among government officials accused of mismanaging the country’s wealth for personal gain.

‘The victims will continue to grieve’

As the protesters made their way along Monrovia’s streets and up Capitol Hill earlier this month, many wore t-shirts and carried placards demanding a court to try war crimes and economic crimes – key TRC recommendations aimed at wringing accountability and reparations from still powerful former warlords.

Neighbouring Sierra Leone, which also suffered a closely linked civil war that ended a year before Liberia’s, is experiencing similar problems of graft and immunity despite having set up a war crimes court within a year of the conflict coming to an end. This suggests that retributive justice is not the be-all and end-all to post-war recovery.

Neither Sierra Leone nor Liberia has seen a resumption of conflict since their wars ended, but both continue to suffer from high poverty levels that can kill people and ruin lives in other ways – factors compounded, experts say, by the failure to fully implement reforms meant to sustain transitional justice interventions and build a positive peace.

While transitional justice efforts in Sierra Leone and Liberia began well, implementation of peacebuilding and recovery plans has been less successful and the challenging socio-economic conditions that prompted the wars in the first place remain in both countries. This is in large part due to a lack of political will to follow through on the delivery of recommendations following the withdrawal of external support.

Peterson Sonyah is the executive director of the Liberia Massacre Survivors Association. He represents a community of survivors of some of the worst wartime atrocities, including the St. Peter’s Lutheran Church Massacre in which 600 civilians sheltering in the church were killed in 1990. He lost seven members of his own family.

“Those who committed crimes against humanity in this country are the ones benefiting from the resources in this country,” he said. “For as long as you see those people moving around scot-free, the victims will continue to grieve.”

Impunity is particularly problematic in Liberia, where – unlike in Sierra Leone – a handful of notorious wartime perpetrators continue to enjoy positions of political power and the corresponding material benefits, with no apparent need to account for their past actions.

“Not dealing with the past undermines the rule of law.”

Although progress has been made in Liberia in setting up institutions such as a General Auditing Commission designed to increase accountability, a major weakness in the recovery effort has been the continued absence of justice and reparations for the victims of wartime atrocities.

“Not establishing a war crimes court will come with consequences,” warned Adama Dempster, head of the Civil Society Human Rights Advocacy Platform of Liberia. “Not dealing with the past undermines the rule of law. No wounds have been healed and there’s no mechanism to help people who live with injury.”

The low level of political will to implement the TRC’s recommendations, particularly around the establishment of a court, is perhaps unsurprising given that President Sirleaf was included on a list of perpetrators whom the TRC recommended should be sanctioned and barred from public office for 30 years. Instead, she remained in office for the constitutionally permitted two terms before handing over to Weah in free and fair elections in January 2018.

Money dries up in Liberia

In a recent television interview, Sirleaf stated that Liberia has “moved beyond all of those bad things that characterise our country.”

Defending her failure to act on the TRC’s recommendations, she described how the process of reconciliation has “transformed [instead] into a palava hut”.

The “Palava Hut” programme is detailed in Liberia’s national peacebuilding roadmap as a means of accounting for wartime wrongdoings. Its design is informed by a traditional conflict resolution mechanism in which disputing parties gather at a neutral meeting place (such as a village “palava hut”) to discuss and resolve disagreements with the mediation of community leaders.

“That process has started; the process of contrition and forgiveness,” said Sirleaf.

The process does appear to be well suited to helping citizens draw a line under past atrocities, since a social cohesion study in 2018 revealed that 88 percent of respondents would support amnesty for perpetrators of war crimes if those responsible apologised and showed remorse.

Edward Mulbah, executive director of Liberia’s peacebuilding office within the Ministry of Internal Affairs, confirms that the Palava Hut programme started in 2013 but says it came to a halt in December 2016 – more than a year before the end of Sirleaf’s tenure – after funding dried up. 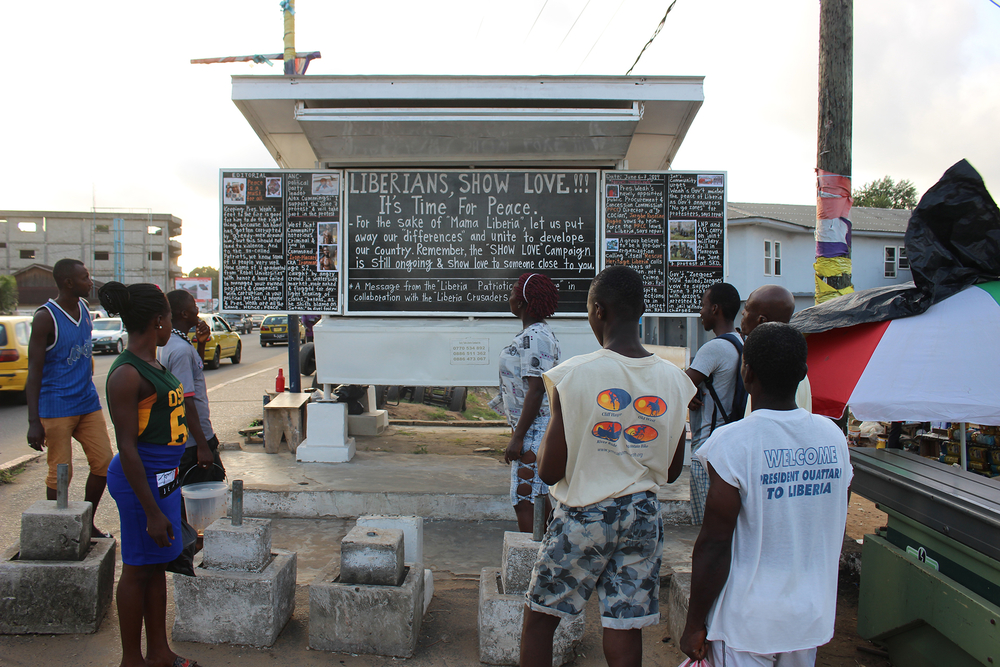 Lucinda Rouse/TNH
Calls for peace were visible around Monrovia on the eve of the 7 June protest.

And although palava hut discussions feature heavily in the current government’s development strategy, Mulbah notes that there has been no budget allocation to fund activities and even the salaries of staff in the peacebuilding office are uncertain.

Neighbouring Sierra Leone’s civil war finally ended in 2002, following a peace agreement signed in 1999 between the government and rebel forces, which led to an amnesty for all warring parties – with the exception of gross human rights violators.

A Commission for the Consolidation of Peace was established, which was responsible for reconciliation efforts and the creation of a TRC. A Special Court set up in 2002 saw the conviction and sentencing of 10 people before it closed in 2013.

However, he continues, efforts to deliver transitional justice in Sierra Leone have been largely superficial and “we have not seen any genuine and sustained commitment to follow up on these formal interventions.”

As with the absence of budgetary allocation to finance the Palava Hut Process in Liberia, a reparations programme that began years after the war ended in Sierra Leone received insufficient funding to compensate all of the identified victims.

As a result of an absence of political and economic reforms, issues such as corruption – identified along with chronic elitism and inequality as a root cause of the war – remain endemic.

Sierra Leone was ranked 129th out of 180 countries in Transparency International’s 2018 Corruption Perceptions Index, while an estimated 77 percent of the population lives in poverty.

For Sesay, although there was a symbolic effort to ensure that the leading human rights violators were brought to justice, many of the underlying conditions that prompted violence in the first place remain present.

He describes Sierra Leone’s transitional justice process as “empty”, since the small number of prosecutions achieved by the Special Court has failed to transform the lives of ordinary citizens who “want to be able to live a life of dignity, take care of their families and have access to jobs.”