Failed rains across eastern Africa, southern Africa, and the Horn of Africa are seeing another dire season for farmers, increasing food prices and driving up the aid needs of tens of millions of already vulnerable people across the three regions.

All told, more than 45 million people will struggle to find enough food across 14 countries in 2019, many feeling the compounded effects of years of drought.

It’s the second time in three years that an El Niño event has disrupted weather patterns. In 2017 – a year in which the UN labelled the crisis the worst in decades – some 38 million people were in need.

Drought again in 2018 was followed by significantly below-average rains at the beginning of this year – down by 50 percent in parts of southern Africa.

In the Horn and eastern Africa, delayed rains finally arrived in May, allowing some regrowth of pasture for grazing. But it has not been enough to offset the damage to people’s livelihoods and overall food security.

“We need to move to a system where we act much earlier on the warning signs of drought and hunger so that we can cut response times and costs, and reduce deaths and human suffering,” the UN’s Emergency Relief Coordinator, Mark Lowcock, said in reference to the drought in the Horn.

The UN’s Central Emergency Response Fund has released $45 million to encourage major donors to do more to combat the effects of drought in parts of Somalia, Ethiopia, and Kenya.

With an El Niño forecast more than six months ago, World Food Programme climatologist Jesse Mason argues there should have been time for governments and aid agencies to put in place risk-reduction measures: drought-resistant seeds, irrigation systems, and cash transfers to cushion the impact on farmers.

“We need to recognise the seasons are changing and we need to adapt.”

It can no longer be business as usual, Mason told The New Humanitarian. Southern and eastern Africa are on the front lines of climate change, and mitigation measures must now be much more data-driven, comprehensive, and innovative.

“We need to recognise the seasons are changing and we need to adapt,” said Mason, project manager at WFP’s forecast-based financing initiative. “The pieces need to come together, from the global forecasting to the way we interact with farmers on the ground based on that information.”

The following is a snapshot of needs across southern, eastern, and the Horn of Africa.

The term “food crisis” means households that are just about able to meet their basic food needs, but only by selling some essential assets like livestock. There may also be cases of malnutrition. A “food emergency” refers to very high levels of malnutrition and some deaths. All assets are liquidated, making recovery so much harder.

The government declared an emergency in the three southern provinces of Cunene, Huila, and Namibe in January. Angola has been pursuing a humanitarian self-reliance policy but the response has been inadequate and the situation is deteriorating. 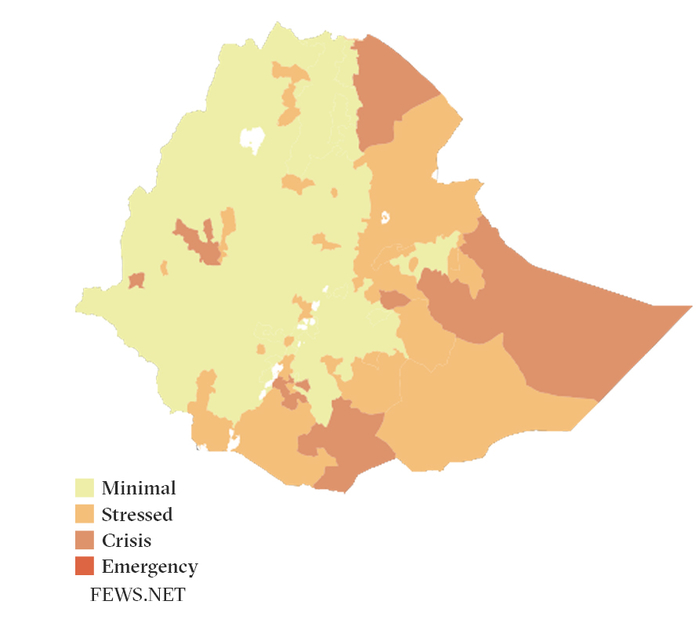 The most vulnerable communities have suffered consecutive years of drought. This season’s Gu long rains (March to May) were poor or delayed. Although a late burst of rainfall has helped replenish pasture in the south and southeast, it came too late for some crop-producing areas and the food security situation is expected to deteriorate. Numbers in need are exacerbated by mass internal displacement as a result of inter-communal violence – affecting some 2.6 million. Concerns are also rising over potential food aid pipeline breaks that could interrupt life-saving operations. It’s $1.3 billion aid appeal is only 15 percent funded. 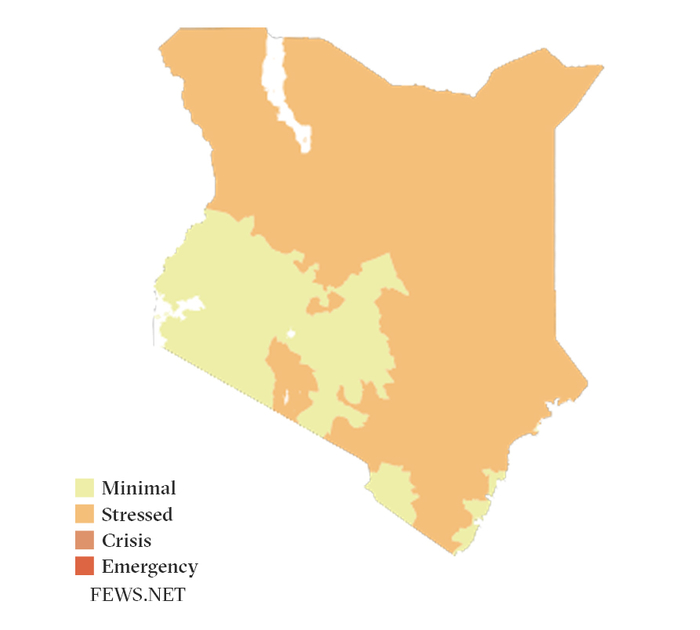 The long rains were similarly poor – less than half the expected amount fell by April. By July the number of severely food insecure is projected to more than double from the current 1.1 million to 2.5 million. Below-average terms of trade and reduced household incomes during the July to September dry season could push parts of eastern Kenya into crisis by August.

Four districts are at crisis or emergency levels – Mohale’s Hoek, Maseru, Quthing, and Qacha’s Nek. A total of 640,000 people are projected to be food insecure over the next 12 months. Lesotho has a population of 2.2 million. 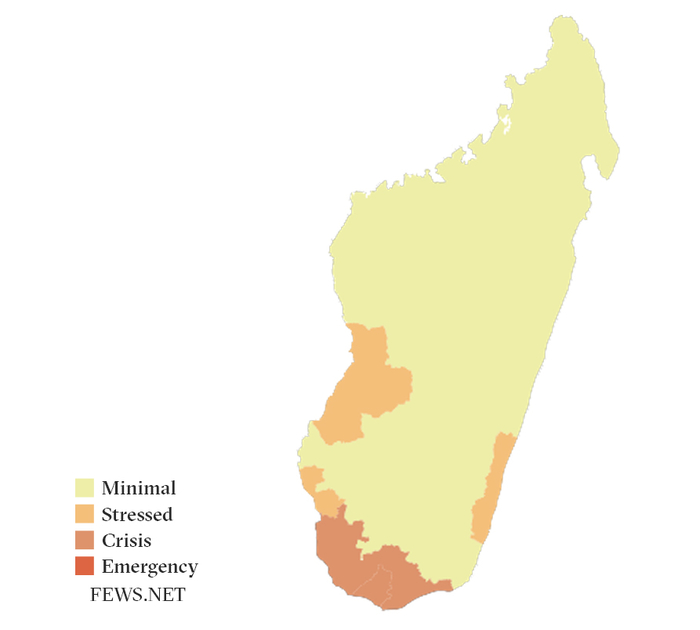 By March, 1.3 million people were severely food insecure. Although the vulnerable southern region received fair rainfall this season, the harvest is forecast to be well below average. The south is yet to recover from the effects of the 2015/16 El Niño and the 2017/18 drought, and the number of children who are acutely malnourished is expected to rise in 2019. 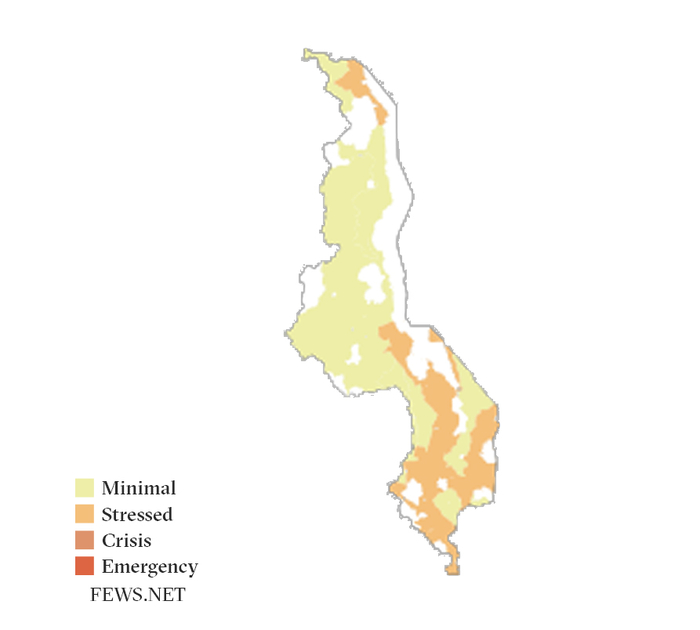 Some 2.8 million people are projected to be in crisis and 450,000 at emergency levels of food needs during the October to March lean season in the country’s southern and central districts. 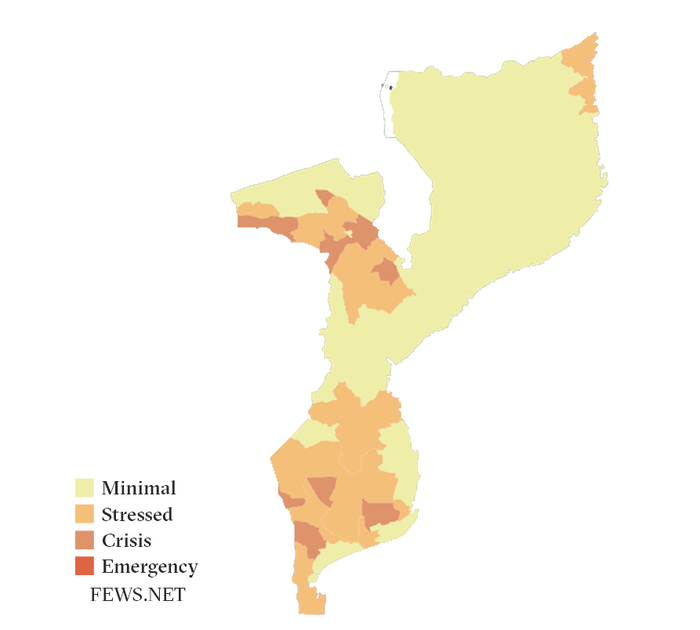 More than 1.7 million people were identified as in crisis between September and December 2018 across 11 provinces. As a result of Cyclone Idai in March and Cyclone Kenneth in April, an estimated 1.85 million are now in need of aid.

At the beginning of May the government declared a drought-induced state of emergency – the third time in six years. All regions of the country are affected, with 24 percent of the 2.3 million population facing food shortfalls. 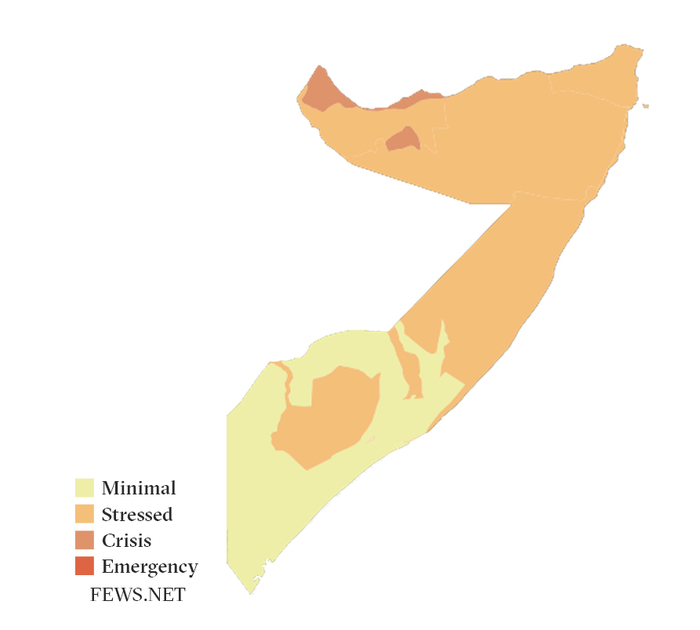 After two consecutive poor rainy seasons Somalia is facing yet another drought. The 2019 Gu rains (April to June) have failed, on top of a poor 2018 Deyr season (October to December), contributing to widespread crop failure and lower livestock productivity. Pastoral communities in the worst-affected areas – in the north and centre of the country – are facing acute food insecurity. Drought-related displacement is underway and malnutrition rates are rising. Food aid levels have “significantly declined” compared with last year. A $700 million drought response plan has been launched. 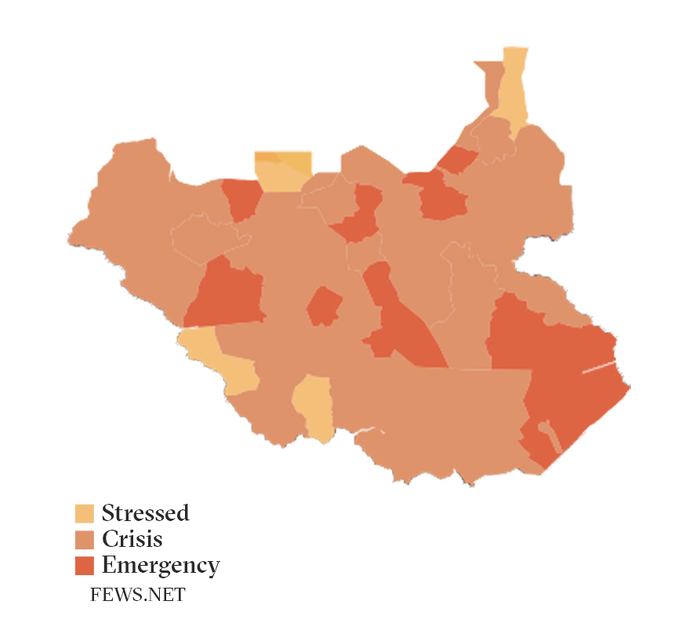 Conflict and drought has created a disastrous situation. Some 6.9 million people – close to 60 percent of the population – are currently facing severe food insecurity with an estimated 50,000 in “famine-like” conditions. In many areas, malnutrition levels remain critical, with some 860,000 children under the age of five estimated to be severely malnourished. Out of the overall 7.1 million people in need, only 5.7 million are targeted for aid. The aid appeal stands at $1.5 billion, but so far only $346 million has been received. 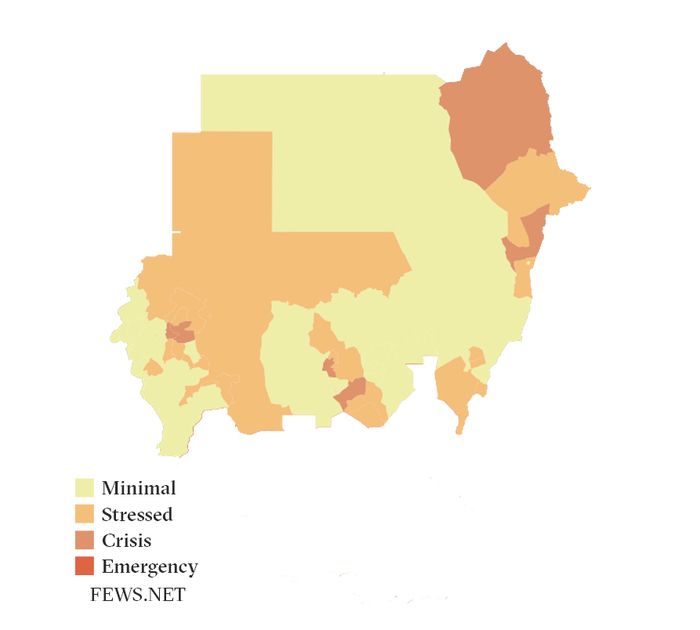 Around one million people are facing emergency conditions – concentrated in the states of Khartoum and South Darfur. The Darfur region accounts for 45 percent of all Sudanese in need (crisis and emergency levels). Sudan’s crisis is less weather-related and more a consequence of food price rises. Overall, prices of grains were at record or near-record levels in March despite an above-average 2018 harvest. The depreciation of the local currency, fuel shortages and input costs combined to push up the cost of living - one of the triggers for the protests that led to the toppling of former president Omar al-Bashir in April. 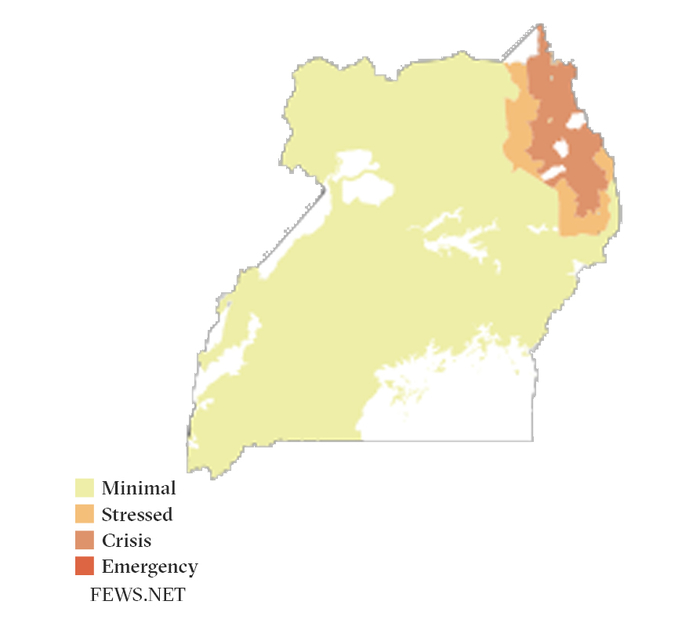 The arid Karamoja region – bordering Kenya, Uganda, South Sudan, and Ethiopia – has been hit by a second failed rainy season. Numbers in need are not yet known, but staple food prices are expected to remain high through to September, well above the five-year average.

Maize producing areas in the south experienced their worst drought since 1981. Maize production is estimated to have dropped to two million tonnes from approximately 2.4 million tonnes last season and exports have been banned – which will impact prices in the region. The projected number of households needing food aid from July to February 2020 is 220,000 – a 38 percent increase from last season. 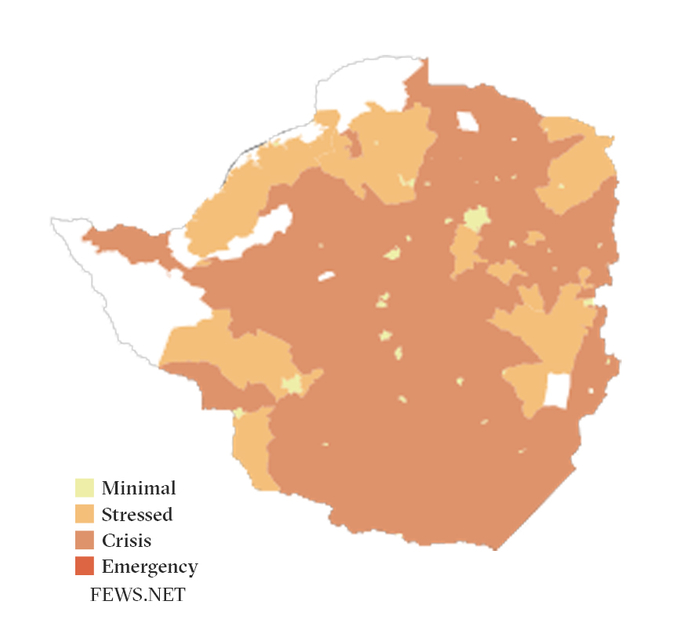 Total cereal production this season was estimated at 852,000 tonnes, against a national requirement of 1.8 million tonnes for human consumption and 450,000 tonnes for livestock. Compared to the 2017/18 season, the provinces of Manicaland, Matabeleland South, and Matabeleland North all saw their maize production drop by more than 70 percent. Climate shocks have compounded severe economic difficulties. By September, most of the country is expected to be in “crisis”.