Sudan has had three military leaders in the last week. However the political upheaval ends, the backdrop to this crisis includes multiple conflicts, displacement, and an economic crunch affecting the living standards of millions – humanitarian issues that won’t be resolved soon.

Needs have remained stubbornly high for years, using up an average of over $600 million in donor funding in each of the last five years just to tackle immediate priorities, including food aid, health, and education. The country also hosts more than 800,000 refugees from South Sudan.

A senior UN official in Khartoum said it was too early to predict the wider impact of political developments in the country of almost 44 million, and that the short-term priority is getting humanitarian operations back to full speed after days of slowdown.

"We remain extremely concerned about deepening humanitarian needs among the current caseload,” the official said, requesting anonymity due to the sensitive political situation.

Macroeconomic conditions are “extremely poor”, according to the Famine Early Warning System Network, known as FEWS NET, a US-funded food security monitor: some 13 percent of the population (5.76 million people) are in “crisis” or “emergency” levels of hunger.

In addition, the national currency is rapidly depreciating against the dollar, bread prices have jumped since the government lifted subsidies on imported wheat, and fuel price hikes have almost doubled the cost of transport. Cereal prices are “250 percent above the five-year average”, according to FEWS NET.

There is already a "fast deterioration in living conditions in urban areas due to the economic situation," the UN official said, adding that the limited availability of banknotes is also slowing the wider economy and relief operations.

“The bread price rise was the final straw for much of the urban-based population in Sudan,” explained World Food Programme country director Matthew Hollingworth. “The humanitarian and development needs of the people of Sudan must be prioritised – particularly right now – to stabilise sections of the population through this transitionary period.”

The Sudanese military faces continuing diplomatic pressure to allow civilian administration. At the time of writing, groups backing protests in Khartoum had not accepted promises of a two-year military transition to civilian rule – along with the sacking of President Omar al-Bashir and regional governors.

A senior African diplomat based in Sudan urged caution, saying the risks were high if the whole military-run edifice was rapidly dismantled, given weak institutions and civil society, widespread disaffection, and smaller conflicts across the country.

Despite the “euphoria” of the peaceful protests, “the cracks could start to show, and the whole thing start to crumble,” the diplomat warned. “They’ve got to hold this entity called Sudan together.”

The possibility of a political turning point has been vivid in Khartoum. But Sudan’s multiple crises have political mismanagement at their root, analysts say.

“Sudan is so much more than the capital. If Sudan's patterns of governance do not change, the aspirations of millions of marginalised Sudanese will still not be met.”

While Khartoum’s protestors and the formation of an interim government had the limelight, “root and branch reform” was “desperately needed” to address broader grievances, said Aly Verjee, a researcher on Sudan and South Sudan at the US Institute for Peace.

“Sudan is so much more than the capital,” Verjee said. “If Sudan's patterns of governance do not change, the aspirations of millions of marginalised Sudanese will still not be met.”

Some of the pressure on the poorest and most vulnerable is contained by international humanitarian aid, but an opening up of financial assistance is limited by sanctions.

Hollingworth of the WFP warned that Sudan’s economic problems now risk spreading to other areas, causing wider civic and military instability and endangering the pillars of a cohesive society.

Khartoum may hope for help from the Gulf in the short term: Sudan is aligned with Saudi Arabia and the United Arab Emirates, and Sudanese troops and militia are fighting alongside them in Yemen. Riyadh quickly promised fuel, wheat, and medicines in a welcome package to the interim military regime.

UN states and donor nations currently pay over $1.5 billion a year to contain conflicts and humanitarian needs in Sudan. The UN and NGOs have prepared a humanitarian response plan for 2019 to support 4.4 million people. The final draft, with a price tag of about $1 billion, was under review by the government before the political crisis erupted on 6 April, the UN official said. The cost of the appeal was similar to recent years.

Longer-term development funding for Sudan is limited, and “humanitarian financing is being used for things it shouldn’t”, according to Rachel Scott of the Organisation for Economic Co-operation and Development (OECD).

Scott, who has advised donors and the Sudanese government on development financing, said sanctions were a “huge issue” that largely stopped Sudan from tapping more aid funding or negotiating relief on over $50 billion of debt.

Sudan is listed by the United States as a state sponsor of terrorism, and al-Bashir is wanted by the International Criminal Court to stand trial for crimes against humanity and genocide committed in Darfur. Various other US, UN, and EU sanctions apply to individuals accused of involvement in the arms trade or of committing rights violations in the Darfur conflict.

These legal limitations add to a wider hesitance to engage with a near-pariah state, but Scott argues that donors should start to get ready for if and when political obstacles are lifted.

Sudan won a reprieve from some US sanctions in 2017, and could aim to open the first stages of a debt relief process with the International Monetary Fund, according to an OECD report. One of the largest donors is the European Union, which funds programmes to limit migration through Sudan towards the Mediterranean, allegedly benefiting militia connected to rights abuses.

In the absence of loans and development finance from institutions like the World Bank, so-called humanitarian budgets (which have fewer political strings attached) are plugging gaps that would normally be dealt with by development funds.

Donors should be thinking about where any new development investments should go, to win the maximum return on stability for a “new day”, said Scott.

Darfur, and other conflicts

As well as Darfur in the west, a clutch of small-scale rebellions and tensions are simmering on the periphery of Sudan, especially in the southern border areas of Blue Nile and South Kordofan, and in Kassala in the east.

A UN-African Union peacekeeping operation in Darfur – with a budgeted cost of $715 million in the current year – is due to close at the end of 2020, handing over some responsibilities to the civilian arm of the UN, aid groups, and the Sudanese authorities.

The African diplomat said the rationale was that the “blunt instrument” of a uniformed mission may not be the right tool to address Darfur today. Other actors in aid and development need to step in, the diplomat said, adding: “If development doesn’t come, the fragile peace isn’t going to hold.”

The armed rebellion in Darfur that began in 2003 has been largely quelled, but at a very high cost, and without resolving many of the land disputes and other issues that caused it.

The counter-insurgency campaign steered by al-Bashir and government-allied militia left tens of thousands dead, villages burned, civilians bombed, refugees fleeing to Chad, widespread rape and dispossession, and the displacement of up to two million people.

The UN-African Union Hybrid Mission in Darfur (UNAMID) – started in 2007 to protect civilians, facilitate humanitarian aid, and to mediate and foster community-level peace talks – has had only limited success.

Hampered by Sudanese intimidation and restrictions on supplies, fuel, flights, personnel, and movements, years of talks have proved inconclusive, while human rights abuses have persisted.

Sudan has urged UNAMID’s closure since at least 2014, arguing that it is no longer relevant. Human RIghts Watch last year slammed the “Sudanese government’s long practice of intransigence and obstruction”. In 2018, the UN Security Council again objected to “bureaucratic hindrances”.

The peace process, mediated initially by Qatar in Doha, is at a standstill, according to the UN in February 2019. The mission, once aimed to be a 25,000-strong force, is already winding down – troop and police levels are currently set at 6,000-7,000 personnel. 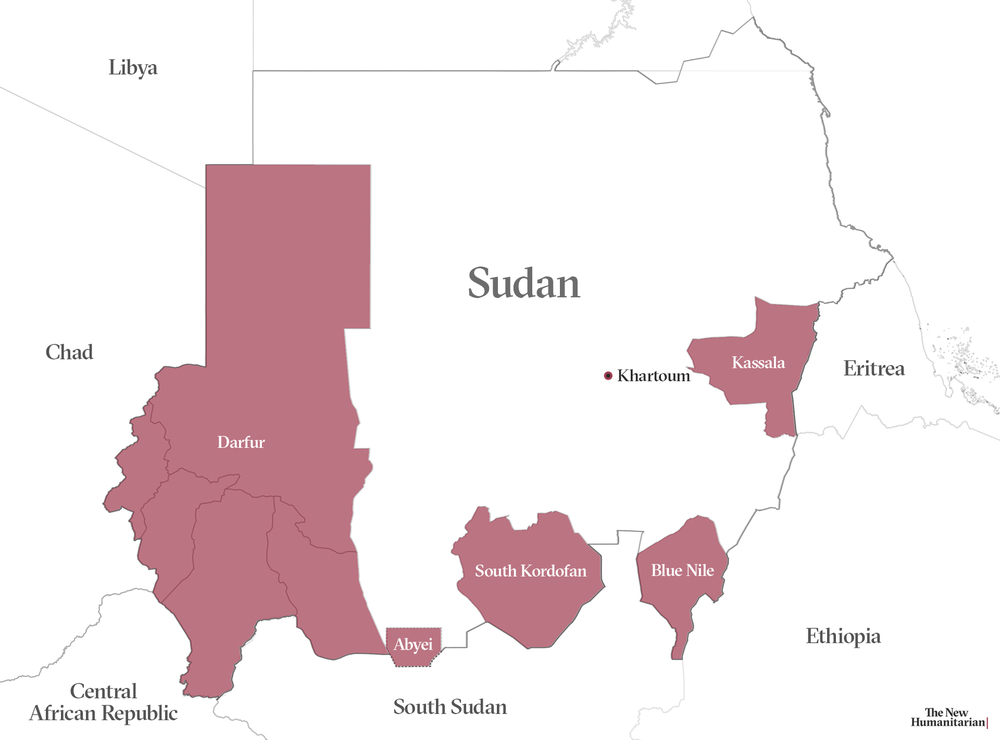 Another peacekeeping operation attempts to stabilise the Abyei region, at a cost of $282 million in the last budgeted year.

A detailed process to decide the borders and future of Abyei was part of the agreement on South Sudan’s independence. But the agreement broke down and the area remains in an administrative hiatus – claimed by both nations and patrolled by the UN Interim Security Force for Abyei, or UNISFA.

Two other north-south border areas also face intermittent conflict, with the Nuba Mountains of South Kordofan predicted to suffer emergency levels of food insecurity later this year by FEWS NET. The third area, Blue Nile, bordering Ethiopia, is also the site of a long-running and little-noted conflict, with related civilian vulnerability and displacement.

Sudan also has a significant stake in its southern neighbour: news reports point out that Khartoum stands to benefit if stability returns to South Sudan and oil exports via the north’s pipeline resume.

Al-Bashir had played a role in putting together the latest internal South Sudan peace deal, and stood as a guarantor of the agreement, while hosting some of the key figures – despite being at war with southern secessionists for most of his time in power.

So far no changes have been announced to the Humanitarian Aid Commission, through which the government tightly regulates humanitarian work.

A Sudanese aid worker said the HAC and the National Intelligence and Security Service, or NISS, were closely associated, with the HAC controlling travel permissions, project approvals, and visas for foreign workers. NISS offices have been attacked or set on fire in Darfur, as demonstrators look at them as “first enemies”, the aid worker said.

“I hope the realists can find a way of accommodating the idealists.”

The UN official called for the lifting of access restrictions such as travel permits and single-entry visas to ease the humanitarian response.

Verjee went further. “The HAC is a combination of military intelligence, NISS, and other – mostly obstructionist – bureaucrats,” he said. “Its abolition would be welcome.”

The head of NISS, Salah Abdallah, known popularly as “Gosh”, stepped down last week. Nevertheless, the future role of NISS and of the HAC are a large question mark for the humanitarian aid sector.

“For the forces of change, those restrictions should not be there in the first place,” the aid worker said, adding, “we can write books” about the breadth of manipulation of aid by the HAC.

How such issues will be dealt with by whichever new administration emerges from the current tumult in Khartoum is unclear.

Faced with balancing the hopes of protestors and the need to hold the state together, the African diplomat said political events were an opportunity, and added: “I hope the realists can find a way of accommodating the idealists.”