After months of diplomatic wrangling and despite repeated warnings of humanitarian catastrophe, the long-threatened assault on Yemen’s Red Sea port city of Hodeidah is now underway.

Forces backed by the United Arab Emirates and their Yemeni partners – part of a Saudi Arabian-led coalition that has been fighting Houthi rebels and their allies in Yemen since March 2015 – are now on the outskirts of the Houthi-controlled city of 600,000.

No one can be sure how the battle will play out, but everyone agrees that in a country that has been on the brink of famine for years, the offensive will make life for 27 million Yemenis even worse. However, this sort of statement (found in just about every aid agency press release and headline) doesn’t mean much to those on the ground or give a picture of what’s really at stake.

YEMEN BY THE NUMBERS

Hodeidah is a port, a city, and a province, and all these things matter. Here’s a briefing with a bit more detail about each to explain what is keeping humanitarians up at night.

The province: Fleeing into harm’s way

It hasn’t made the headlines, but civilians have actually been on the run in Hodeidah province since November, when coalition-allied forces began slowly making their way up Yemen’s western coast.

Up-to-date displacement numbers aren’t available for all of Yemen, but the UN figures that do exist are telling. Since December, more than 112,000 people have fled to the country’s southern provinces, including Aden, and 62 percent of them escaped Hodeidah province.

It hasn’t all been one-way traffic. Aid workers report that many civilians have also taken flight inside Hodeidah province, fleeing north towards the city and exhausting their resources along the way just to get there.

Isma’eel al-Sharabi, director of the Hodeidah-based Ash'ari Association for Social Charity, told IRIN that large numbers of people had fled into the city, despite the imminent assault. Many are staying with relatives, while others have taken shelter in schools and other public buildings.

“Of course people will run from their current homes to other places where they feel safe,” he said. “But if they move to a neighbourhood in large numbers, or to another governorate in large numbers, [displaced people] put pressure on the existing structures – meaning water and health facilities will not be enough for the original inhabitants.”

A UN bid in April to evacuate some civilians from southern Hodeidah province failed as locals were reluctant to leave their livelihoods and homes behind.

A recent UN operational update says “the humanitarian community is preparing for possible mass displacement and increased humanitarian needs, if the conflict reaches the city”.

Lise Grande, the UN’s humanitarian coordinator for Yemen, told IRIN the UN has positioned supplies around the province but is not planning on setting up camps for displaced people.

Displacement is hardly the only concern for those in the region, however. Houthi forces have reportedly left mines in southern parts of the province, and, according to several aid workers, coalition airstrikes have destroyed some of the roads that humanitarians use to access communities in need.

The city: “Trapped in the line of fire”

As fighting intensifies on the outskirts of Hodeidah, some civilians are reportedly already attempting to flee. But not everyone will be able to get out of harm’s way.

“In these instances, the people who remain behind are the elderly, children, and disabled people,” said the NRC’s Abdi. “It is harder for them to move, especially if they don’t have means or the money to enable them to move from one area or another. There is a danger that some people might not want to move, and they could be trapped in the line of fire.”

The city’s population has already suffered three years of war. As in most of Yemen, civil servants have largely gone unpaid for almost two years. Salahuddin al-Maswari, project coordinator for the Yemeni All Girls Foundation for Development in Hodeidah, says most other residents work as day labourers or in markets and spend everything they have on food.

“I’ve been here in Hodeidah for one year now, and I’ve seen so many heartbreaking scenes,” al-Maswari said. “Families can barely feed their older children, and sometimes they go without food for days.”

Most of the people in Hodeidah city already rely on aid agencies to bring them safe water by truck, but UNICEF spokesman Bismarck Swangin worries this may not be possible if fighting escalates.

“During clashes, the public water corporation operators will not be able to report to their stations and operate the system,” Swangin told IRIN. “It will be impossible for water trucks to move around within the city.” This “increases the risks of people having no access to water and sanitation services, which will cause health and environmental risks.”

Yemen has already seen how quickly water-borne disease can spread without proper sanitation and clean water: a cholera outbreak, now largely under control, has killed 2,300 people and infected more than 1.1 million since April 2017.

The port: The poor will starve first

While civilians in Hodeidah city and province are in clear danger, the port is also a key concern. In a country like Yemen that imports almost all its food and most of its fuel, seaports are key to civilian survival.

Hodeidah is essential for humanitarian and commercial imports, both because of its capacity to store and mill grain, and because of its proximity to the northern Houthi-controlled parts of the country, where some two thirds of the population live.

Accurate statistics in Yemen are hard to come by, but the USAID-funded Famine Early Warning Systems Network (FEWS NET) estimates that Hodeidah and the nearby smaller port of Saleef bring in approximately 70 percent of the country’s monthly food imports, and 40 to 50 percent of its fuel.

If the port is damaged or otherwise cut off by fighting, Yemenis across the country are in trouble, not so much because food will be unavailable (although that is not out of the question), but because it may become so expensive that most people won’t be able to buy it.

Hodeidah was bombed in August 2015, and has been operating at reduced capacity ever since. Two much-trumpeted USAID-funded mobile cranes arrived at the port at the start of this year, but, according to Suze van Meegen, protection and advocacy advisor for the Norwegian Refugee Council in Yemen, they haven’t made much of a difference. 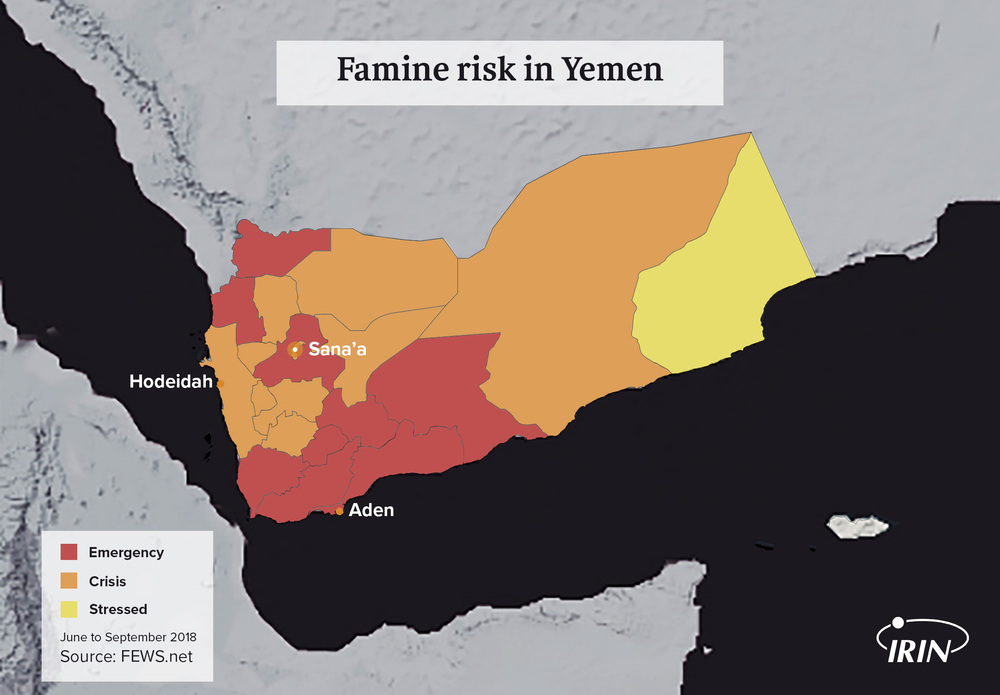 “The damaged cranes were giant, permanently-installed pieces of machinery, capable of offloading up to 30 containers each per hour; their substitutes are extendable apparatus attached to the sort of tiny, portable trucks one might expect to see at a suburban construction site,” van Meegen told IRIN.

There are other ports in Yemen – namely government-controlled Aden – and goods also come in through official border crossings with Saudi Arabia and Oman, not to mention various smuggling routes. But bringing goods from Aden or the land borders means an increase in transport costs and taxes – both at the port and at the entrance to the Houthi-controlled north, plus at unofficial checkpoints along the way. These costs would invariably be passed down to consumers, and there is some precedent for this: prices shot up almost immediately when the coalition shuttered Hodeidah and Saleef last November.

The NRC’s Abdi said “the whole of northern Yemen will feel the pinch if the port is closed or disrupted”, but pointed out that people across the country who’ve exhausted their resources will also suffer. Scott Paul, head of humanitarian advocacy at UK-based charity Oxfam, says those most impacted will be, to put it bluntly, “everybody that is already poor”. In Yemen, that’s millions of people.

The UN Security Council was to hold a last-minute emergency meeting on the offensive, and UN Special Envoy to Yemen Martin Griffiths said he was negotiating to keep the port open, but coalition forces appeared set on continuing their march through Hodeidah.

On Wednesday, Saudi Arabia and the UAE announced a “five-point plan” to “safeguard and intensify the flow of humanitarian aid into the port of Hodeidah.”

In a statement, they said they planned to open shipping lanes from Hodeidah to Jazan in Saudi Arabia and Abu Dhabi, and would be distributing food, medical supplies, staff, and economic support on the ground, as well as ensuring continued electricity supply.

The coalition has said it will attempt to avoid damage to the port, and hopes to keep it running even if it finds it mined by the Houthi rebels.

But heavy airstrikes have been reported south of Hodeidah city, and aid agencies say they are already finding it increasingly difficult to do their jobs. The NRC said its programmes in Hodeidah and nearby Hajjah province had been “severely disrupted by fighting”, but they have not evacuated staff.

“We have been stockpiling supplies wherever possible and taking additional steps to protect what we have so we can deliver it to people as needed, but as the offensive takes hold of more highly-populated areas we can expect to be completely overwhelmed by the scale of need,” the NRC’s van Meegen said.

Paul of Oxfam said that in addition to continuing attempts to stave off a disruption at the port, the organisation would be “supplementing markets as much as we can, with cash when possible and with food and fuel when necessary.”

The UN’s Grande emphasised that “the UN is in Hodeidah,” with local Yemeni staff working to assist those in need. She said a World Food Programme vessel was offloading food, and that the UN was delivering health, water, and sanitation programmes.

“We are not going to leave Hodeidah,” she insisted. “Too many lives are at stake."