After a string of breakthroughs in 2016 and 2017, President Bashar al-Assad’s government now has the clear upper hand in Syria’s long war.

Out east, the so-called Islamic State has been crushed between the hammer and anvil of al-Assad’s army and a Kurdish-led group backed by the United States. A ceasefire between the army and the Kurds is now in place along the Euphrates River and, despite the much-ballyhooed de-escalation zones brokered by Moscow, violence has quickly drifted back west. In Idlib, renewed fighting has driven some 100,000 civilians on the run in the first weeks of 2018.

But if it seems like a government win is a foregone conclusion, there are still some developments that could throw the pro-Assad juggernaut off track. Plus, restored government control in Syria could take many forms. To help understand which way Syria’s war and peace might be headed, here are five key aspects to keep an eye on in 2018.

The street protests that shook Iran over the last weeks serve as a timely reminder of how important regional developments are to Syria’s future. The protests now seem to have petered out, but had the Iranian government been seriously weakened, the effects would soon have been felt in Syria.

There are other ways in which this key Damascus ally could get into trouble in 2018.

US President Donald Trump has long threatened to tear up the 2015 deal over Iran’s nuclear programme. On 12 January, he extended US compliance once more, but warned that this would be the last time, unless the terms are renegotiated. Deadlines will keep cropping up in 2018, the next one in April. Should the deal be allowed to lapse, it’s possible nothing much happens at all. But Iranian-American relations could fly off the rails, with unpredictable consequences for Syria.

Meanwhile, Israel has stepped up air strikes in Syria and is pushing to contain the Iran-backed Lebanese group Hezbollah in areas near the Israeli-occupied Golan Heights. Israel also keeps a wary eye on Lebanon, where the first parliamentary elections in nearly a decade will be held in May.

A new Hezbollah-Israel war seems unlikely, but they always do until they happen. If one were to erupt in 2018, Syria would likely be drawn into the fighting.

2. Signs of an underground insurgency

Syrian rebels have long said that if al-Assad wins on the battlefield, they will flip to guerrilla warfare and wage a campaign of bombings and assassinations.

So far, that’s mostly talk, and areas retaken by the army have remained more or less stable.

The main exception is Homs, where rebels have staged repeated attacks on Alawite neighbourhoods. Aleppo has also seen a handful of bombings after al-Assad took back the city’s eastern half in December 2016, and every now and then a bomb goes off in Damascus.

While this level of violence seems like something al-Assad could easily tolerate, the underground campaign may escalate.

After losing the war in the east, IS is returning to subversive tactics, and the Idlib-based extremists in Tahrir al-Sham may end up doing the same at some point. Although they have been powerful enough on the battlefield, it is as urban guerrillas that the jihadis’ brutal tradecraft really shines.

In 2018, therefore, it is worth monitoring the frequency of car bombings, assassinations, and suicide attacks in government-held cities. Take special note of atrocities calculated to spark a sectarian backlash in religiously mixed areas like Homs and Tartous – a tried and true tactic of IS.

Seven years of war has left Syria in ruins. A quarter of the population has fled abroad, with 5.5 million registered refugees near Syria’s borders and another million in Europe. Major cities like Raqqa, Deir Ezzor, and eastern Aleppo are in ruins, and 6.1 million internally displaced people are suffering in terrible conditions. The economy is in a shambles, with jobs and services hard to come by and salaries hollowed out by inflation. In all, 13.1 million people depend on aid to get by. 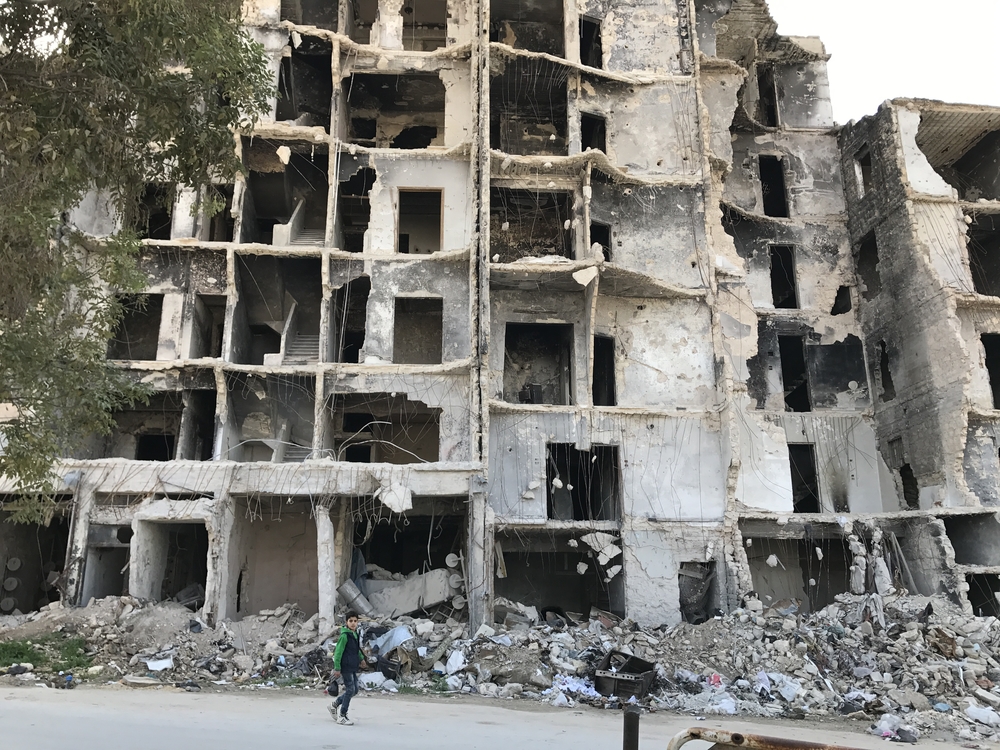 Although several areas of the country remain outside state control, al-Assad’s government now wants to talk about reconstruction. In large part, this is a pitch for money and international legitimacy, but Syrian envoys also point to the humanitarian situation and appeal to their interlocutors’ self-interest: after a war, there’s money to be made.

For major reconstruction to take place, al-Assad will need wealthy Western and Gulf Arab nations to open if not their hearts, then at least their wallets. So far, there are few takers – these nations hate the Syrian president, having tried to overthrow him for seven years.

The United States is pushing its allies to continue the isolation of al-Assad until he agrees to a political transition, though it seems clear that he never will. The policy is more of a holding pattern than a genuine plan for regime change, and some Europeans seem unpersuaded. But so far, all have stuck to the script, and Russian diplomats’ attempts to badger Europe into paying are making no headway.

Full-scale reconstruction seems unlikely. But as time passes and UN transition talks continue to come up blank, more policymakers will likely start arguing that the very real leverage that Western states enjoy through aid financing should be deployed in more practical ways. Transition seems like a dead end, but something has to be done about the situation – and perhaps the regime could be more flexible on other issues?

Once that conclusion settles in, Europeans will find much to haggle over: intelligence cooperation, business deals, prisoner releases, chemical weapons monitoring, restored diplomatic relations, UN cross-border access, Syrian-Israeli ties, the Kurdish question, and refugee return, to name but a few.

Opposition to dealing with al-Assad is still strong, but, at some point, it may begin to fray. In 2018, watch for shifts in Western rhetoric linking reconstruction funding to transition.

4. New faces in the regime

Assuming that the Syrian leader now feels more secure, 2018 could be the year that he starts putting his house in order.

Though civilian ministers have come and gone with regularity, the regime’s inner security sanctum has seen few changes in the past seven years, except to fill in for those killed. The top brass is getting old, both figuratively and literally. Meanwhile, a new stratum of businessmen, paramilitary leaders, and wartime fixers has risen to positions of influence through the war economy, and the army is partly displaced by militias whose loyalty to al-Assad may be assured but whose discipline and respect for public order is not.

There are no signs of organised resistance to al-Assad’s overarching control among these groups, but the loyalist camp clearly brims with accumulated personal, commercial, and institutional tensions. This ultimately undermines the state and makes it harder to normalise the situation.

It is something the Syrian president will want to deal with at some point, in so far as he can, and it also ties back to the reconstruction question. If al-Assad wants to signal that Syria is past the threshold and that a new era is beginning, he’ll need to pour new blood into the system, putting forth fresh faces not overly tainted by the past seven years.

In 2018, keep your ears peeled for talk about military reorganisation, security and ministerial reshuffles, and the use of new laws or anti-corruption campaigns to perform targeted interventions in the war economy.

With the anti-Assad opposition now unviable or hijacked by extremists, foreign actors are shifting their bets to Syrian Kurdistan. Since 2017, the Kurdish question has arguably become the conflict’s central axis.

After helping Kurdish and allied Arab troops in the Syrian Democratic Forces (SDF) capture northeastern Syria from IS, US officials are now turning them into a 30,000-strong border security force. Its area of operations will be the Syrian-Iraqi and Syrian-Turkish national borders, but also the front line against al-Assad’s central government.

Turkish President Recep Tayyip Erdogan is even more upset, accusing the US of building a “terror army” on his southern border. The Syrian Kurdish leadership is linked to Ankara’s domestic arch-enemy, the Kurdistan Workers’ Party (PKK), and US-Turkish relations have plummeted since Washington started supporting the Kurds in 2014.

Erdogan now threatens to invade Afrin, an isolated Kurdish enclave outside the protective umbrella extended by the US Air Force. Afrin does however host a symbolic contingent of Russian troops, which may or may not dissuade an attack – it is not yet clear what the Turks are planning.

All involved seem to be keeping their options open, dancing around the overt hostility between Turkey and the Syrian Kurds and trying to work with both sides.

The Americans are weighing their project in Kurdistan, which has come to represent their main source of leverage in Syria, against the damage to their relationship with Turkey, which is a major NATO ally. It is a difficult debate and the status quo may well win the day, leaving US troops in place as a holding force without any clear end goal.

Meanwhile, Moscow is trying to coax Erdogan into Damascus-friendly deals by dangling the Kurds in front of him, but Russian diplomats have also tried to interest al-Assad in some sort of federal construction that could leave the Kurds where they are and wind down the war.

The Syrian leader could either try that, or he could position himself as a counterweight to Kurdish ambitions, rallying Arab and perhaps even Turkish support for his claims on the northeast. Most likely, al-Assad will try to muddle through for now and wait for the Americans to pack up and leave.

The power games in northern Syria could take time to fully unfold. But in 2018, keep your eyes open for any clues on how US, Russian, and Syrian policymakers want to answer the Kurdish question and its Turkish corollary. What happens in Kurdistan could reshape Syria’s future, perhaps even its borders.

(TOP PHOTO: Woman and child carrying a box of winter clothing in Al-Waer, a neighbourhood in Homs, Syria.)