This article is part of our in-depth coverage. Read more like this...
GOMA

For a country that has witnessed millions of deaths, brutal colonial rule, and devastating dictatorship, the past year in the Democratic Republic of Congo still stands out as a bleak one.

Civilian massacres, decapitated police officers, bloody crackdowns, and resurgent armed groups, were fed in part by a national political crisis. The resulting instability has sparked fears of triggering the kind of regional war that scarred central Africa at the turn of the century, and has sent ordinary Congolese scrambling for safer pockets of the country.

“DRC’s largely forgotten crisis in central Africa superseded all other crises in terms of the number of people forced to flee their homes,” Ulrika Blom, the Norwegian Refugee Council’s country director in Congo, said in a statement. “Even Syria or Yemen’s brutal wars did not match the number of new people on the move in DRC last year.”

More than 922,000 Congolese were internally displaced due to conflict in 2016 – the highest recorded globally, according to a report published by the Internal Displacement Monitoring Center on Monday.

Analysts attribute part of these ills to an enduring election crisis.

President Joseph Kabila stayed in power after his constitutionally mandated two-term limit expired last December, citing heavy costs and incomplete voter lists for the delay in holding elections that were due last November.

“The political situation is chaotic,” said Augustin Kabuya, a spokesman for the main opposition UDPS party.

The government and the opposition coalition, known as the Rassemblement, engaged in two rounds of talks last year to resolve the crisis. The first, mediated by the African Union, a key regional player, failed after criticism that it excluded much of the opposition.

A second deal, brokered by the Catholic Church on New Year’s Eve, called for elections before the end of 2017 and a transitional government. But that agreement too has been stuck after many quarrels – the most fractious being the nomination of the prime minister.

Kabila picked Bruno Tshibala, a dissident who had split from the Rassemblement, for the post in April, angering the opposition, who said the accord had been violated. 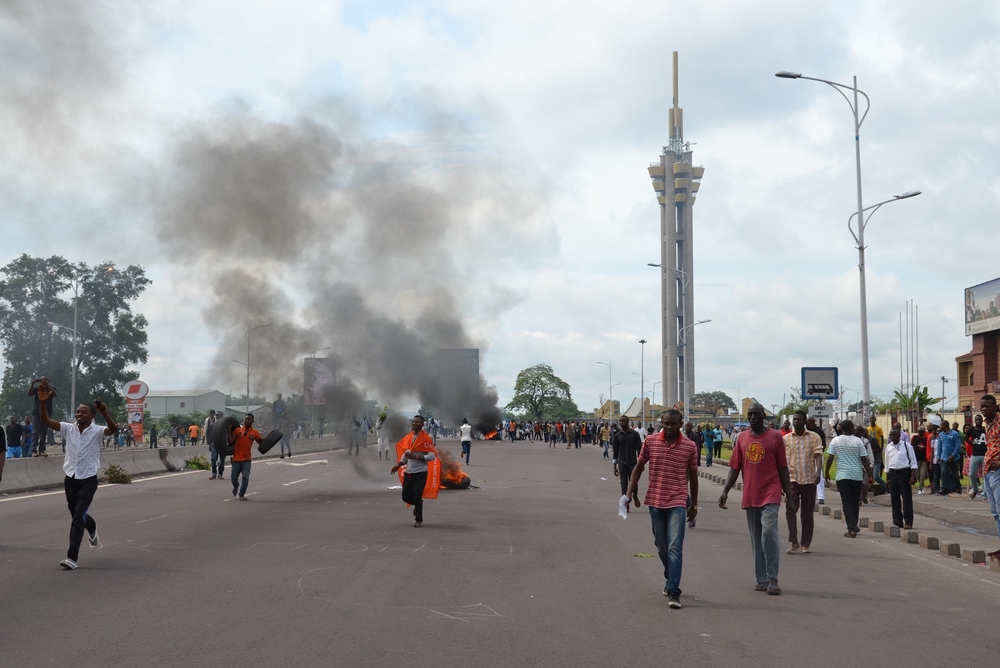 If you count the years since the overthrow of kleptocrat Mobutu Sese Seko by Kabila’s father Laurent in May 1997, the family has been in power for two decades. Joseph Kabila began to rule the country in 2001, after his father’s assassination.

Despite this long period of time in the public eye, not many Congolese are familiar with the media-shy Kabila, said Fidel Bafilemba, a former Mai Mai rebel turned NGO consultant.

“We just woke up one day and he’s the president,” he said.

A Bloomberg News investigation last year found that the Kabilas have “built a network of businesses that reaches into every corner of Congo’s economy and has brought hundreds of millions of dollars to the family”.

“The reality is that [the] natural resource potential we have tends to be a curse,” said Bafilemba, who also coordinates GATT-RN, a coalition of 14 civil society groups that acts as a watchdog for oil, gas, timber, gold, and other minerals. “All it has done is invite predators, not just foreigners but also the government and on top of it Joseph Kabila.”

A government spokesman was unreachable by phone and text message, but the Kabilas have routinely denied any suggestion of wrongdoing.

In February, Etienne Tshisekedi, the charismatic leader of the opposition UDPS, died in Brussels. The Rassemblement has since been riven by infighting and suspicions that some members are hand-in-glove with Kabila.

Even Tshisekedi’s body has become a source of political tension. The government has not agreed on a location to bury him in Congo and the body has remained in Brussels, raising speculation that the delay is to staunch protesters from rallying around the corpse.

“We want to bury him, but Kabila doesn’t want it,” said Kabuya, the UDPS spokesman, later adding: “They are illegally shutting down the offices of opposition political parties; they are burning down offices; opponents are being arrested because of their opinions.”

“UDPS, which is the core of this country, the engine that turns the wheels of democracy and freedom in this country, it’s being hunted, tracked down by the political family of Joseph Kabila,” he added.

More troubling perhaps for Kabila’s opponents, few takers have emerged to fill the void left by the death of Tshisekedi.

Moise Katumbi, an opposition leader, remains the most popular choice by far, according to an opinion poll conducted this year. But Katumbi remains in exile. Less than a quarter of the survey’s respondents had a favorable view of Kabila.

While political uncertainty grows, reports of new violence have proliferated in recent months.

In the central Kasai region, hundreds have been killed – including two UN investigators in March – since armed clashes broke out last August between the Congolese army and a local militia known as Kamuina Nsapu.

UN investigators found about 40 mass graves in the area, according to its emergency aid coordination body, OCHA.

A Congolese woman and her child walk past a UN peacekeepers’ base near Bunagana, eastern DRC (May 2012) 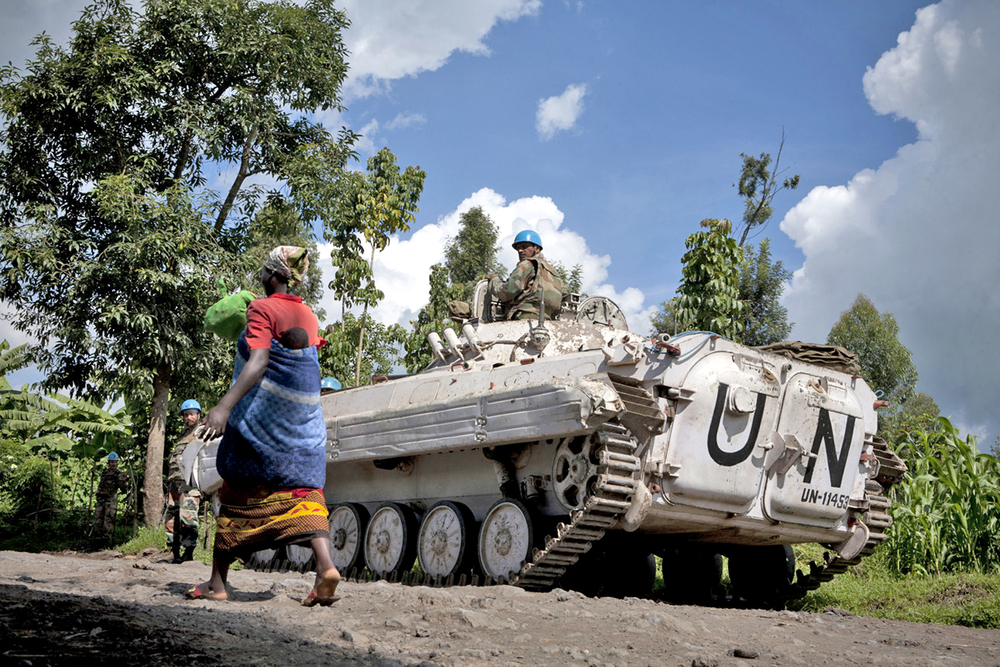 Siegfried Modola/IRIN
Not a lot of love for MONUSCO

“The Kamuina Nsapu militia, which is loyal to a local customary chief killed by the army on 12 August last year, has been accused of recruiting hundreds of children into its ranks, and targeting state agents and symbols, including government premises, schools, hospitals, police stations, as well as churches,” a statement from the UN agency noted.

But the notion that the Kamuina Nsapu is on the rise and that Congo is facing some kind of new emergency is challenged by some who see it as a politically expedient narrative for Kabila and the ruling party.

“This story is a fiction of the majority in power to avoid as far as possible the holding of elections,” said Kabuya of UPDS. “The image that is presented of these people does not correspond with reality.”

“Today, you learn that they are in one corner, tomorrow they are in an another place: No! It's a fabrication,” said Kabuya, adding that if officials were sincere about countering the group, they would entrust the case to international investigators.

In previous years, the vacuum of the state has allowed the rise of armed groups in lawless corners of the country where no public infrastructure or civil society exist.

Critics fear a failure to transfer power peacefully could be an opportunity for other countries to interfere as they have in the past. Congo’s rich resources and location – surrounded by nine countries in the heart of Africa – makes it a tinderbox.

“The time that I started my activism, the president was legal,” Rebecca Kabuo, a 23-year-old activist from the youth movement Lucha, which raises awareness about citizen rights and grapples with Congo’s long legacy of conflict, told IRIN. “But now he’s ruling illegally. He’s not supposed to be a president at this time.”

Ghislain Muhiwa, 27, another Lucha activist, said free speech doesn’t exist in Congo. “They want to block all voices. They don’t want people to be conscious, to know their rights. It will bring people to revolt.”

Congo, which ranks 176 of 188 countries on the UN's human development index, is home to hundreds of international aid agencies, some of which have been around for decades.

Despite this, “the crisis is still going on… poverty, insecurity is still raging,” said Bafilemba. “It’s kind of a never-ending cycle.”

The World Bank ranks Congo 184th out of 190 countries in terms of the ease of doing business there. A slump in commodity prices and staggering 25 percent inflation has further pummelled the economy.

“There hasn’t been a collective strategy,” Baraka Kasali, country manager of the Eastern Congo Initiative, an advocacy and grant-making NGO, said about the international community’s investment in the country.

“I think that this piecemeal effort has actually produced an environment where reform isn’t at the top of the agenda.”

And critics paint a cynical portrait of MONUSCO, saying it’s in the mission’s interest to do little to combat armed groups in order to justify staying in the country for years.

Séverine Autesserre, a researcher and author of the book, “The Trouble with the Congo”, disagrees.

Although African countries could perhaps address the crisis, Congolese have so far watched them with suspicion.

The Congo Research Group poll found that neighbours such as Rwanda and Uganda, with whom Congo has had a fractious past, are not viewed favourably. Angola, a migration destination for Congolese, is viewed in a better light, but European governments and the United States are seen most favourably.

Previously, the United States and the EU have deployed targeted sanctions in Congo. President Barack Obama’s US administration, in particular, pressured the government about constitutional term limits and human rights.

That is now likely to change. President Donald Trump has barely cast an eye on Sub-Saharan Africa. Indeed, Kabila saw Trump’s victory as good news. Hours after Trump won the vote, Kabila praised him for his “brilliant election”.