The fighting in Syria isn’t even nearly over yet, but the international community is already starting to look ahead to post-war reconstruction—or rather, wartime reconstruction. Many are working on the assumption that while the country will be trapped in violence for years to come, the basic outline of Syria’s future is known, and it includes President Bashar al-Assad as the country’s central figure. The real question is who will cough up the money for such a politically fraught project.

2016 handed al-Assad a string of military and political victories that seemed to bury any possibility of an opposition comeback, including Turkey’s loss of faith in Syrian regime change, Donald Trump’s electoral victory in the United States, and the expulsion of Sunni rebels from east Aleppo.

Though al-Assad’s forces are overstretched and have faced setbacks, resistance to the government now seems likely to start tapering off toward more manageable levels. That doesn’t mean the regime will be able to march right back into Idlib, Qamishli, and Raqqa, or that Syria won’t remain a divided country for the foreseeable future. But it does mean that al-Assad is likely to remain in charge of Syria in most of the ways that matter: he’ll have the capital and other major cities, the central government bureaucracy, most of the economy, most of the population, and Syria’s seat in the UN General Assembly. Meanwhile, his former political rivals are being downgraded to regional insurrections and exploited as border patrol proxies by their foreign sponsors.

So while al-Assad’s enemies at home and abroad have yet to acknowledge it in public – as both fighting and peace talks continue – most are now moving on from the idea of a political transition towards a focus on stabilisation, refugee resettlement, counter-terrorism, and reconstruction. What remains to be seen is how they will deal with the fact that the Syrian regime remains unreformed and unrepentant, politically toxic to Western and Gulf Arab nations, and frustratingly difficult to deal with even for those who try, while also standing firmly astride the road to economic recovery.

With hundreds of thousands of dead and half of its people refugees or internally displaced, rebuilding Syria – with countless homes and businesses in ruins – will be a gargantuan task. Cost estimates converge at around $200 billion, though some go as far as $350 billion. For comparison, Syria’s state budget for 2017 was worth around $5 billion. Russia and Iran will surely continue to support al-Assad, as they have during the war, but they are not going to shoulder the phenomenal cost of a reconstruction programme. Neither is China, also onside with the regime but famous for its bottom-line approach to international relations. 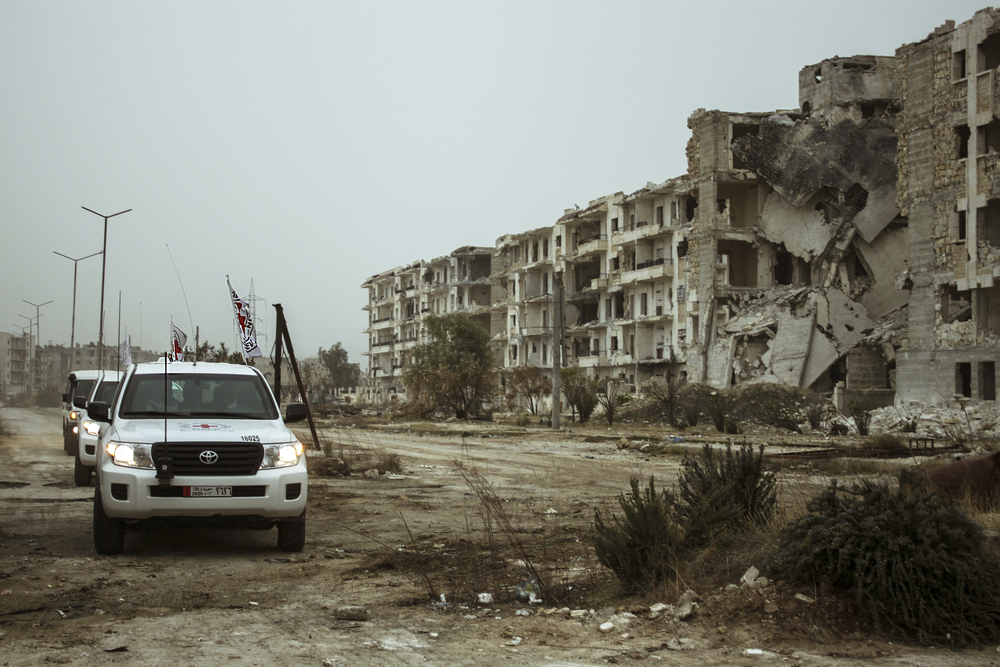 Russian President Vladimir Putin has signalled his interest in “a kind of Marshall Plan” for Syria, which is a subtle way of saying he wants the United States and Europe to foot the bill for reconstruction once they have been defeated. Deputy Foreign Minister Mikhail Bogdanov is reported to have been a little more blunt when informing EU diplomats earlier this year that “tens of billions of dollars” will be needed and that Russia will pay “nothing”.

It doesn’t sound like a terribly tempting offer, but, of course, Putin and Bogdanov know what they’re doing. Many allies of the Syrian opposition have a far greater interest than Russia in a stable Syria, with or without al-Assad, because the consequences of continued war – extremism, religious and ethnic strife, refugees, instability – directly affect their own well-being. In the words of EU High Representative for Foreign Affairs Federica Mogherini, Europe, Turkey, and the Arab world “cannot afford having a black hole there”.

Some of al-Assad’s better-heeled enemies also want to use sanctions and foreign assistance as a carrot and stick to gain political leverage. Former US Secretary of State John Kerry tried this approach when al-Assad moved into east Aleppo last December, saying reconstruction money would never be made available in the absence of a political settlement. Whether that still remains the US position under Donald Trump, no one knows, but on 15 December, the EU also decided that the union will “provide support for Syria's reconstruction only once a credible political transition is firmly under way”.

Thing is, there won’t be a political transition. Minor concessions may well be on offer, but if al-Assad did not surrender his presidency after losing tens of thousands of soldiers and most of Syria’s territory, he is not going to abandon power to unlock a reconstruction fund. European and US hopes to the contrary are a convenient self-delusion, more reflective of a Western reluctance to admit defeat than of their reading of Syrian realities.

He seemed baffled and insulted by the idea that Western, Turkish, or Arab capital could return to Syria or contribute to reconstruction efforts. For these governments, “there will be clear political terms”, Mayaleh said. “First of all, they must apologise to the Syrian people. Then, the Syrian people must accept their apologies. They must also apologise to their own peoples. Finally, they must be held to account by the ballot box.”

So, instead of welcoming foreign investment in its broken economy, the Syrian government is now demanding a political transition in every nation that previously demanded a political transition in Syria. That might seem like the very definition of insane overreach, but Mayaleh’s outburst should not be taken too literally. It is nationalist bluster from a government that has a weak hand to play and hopes to wear down enemy holdouts by demonstrating its own intransigence. Flexibility will come further down the line, when or if there is a realistic chance of a payoff in the form of sanctions relief or aid money.

Many in the Syrian elite seem to be ready for a drawn-out conflict that may yet mutate in unpredictable ways and have no illusions about what lies ahead. In a meeting with IRIN in Damascus last November, a well-connected pro-al-Assad public figure offered up a grim vision when asked about Syria’s future prospects, delivering his verdict in a tone of laconic fatalism.

Certain that al-Assad would remain in power, he was far less optimistic about Syria’s economic recovery. Western and Arab capital would remain hard to attract post-war, he said, and while the state could sputter on thanks to Russian and Iranian support, it would not have much ability to restore the infrastructure, build new housing and create jobs, resettle refugees, attract investments, or resolve social and sectarian tensions.

Rather, he argued, Syria would likely remain fractured, poor, and brain-drained, with a population that would live off UN aid and diaspora remittances for the foreseeable future. It was just how things were now.

Far from a business-friendly environment

Some Syrian officials have tried to dispel the notion of an economic dead-end by pointing to the expatriate business community, arguing that Syrians abroad will be eager to return and invest in reconstruction once sanctions are lifted, safety restored, and amnesties handed out to all and sundry. “You have expatriates, you have the refugees who left Syria, some of them are in good condition, they want to come back,” al-Assad told the Japanese television channel TBS earlier this year.

But the assumption that Syrian money and know-how can spearhead reconstruction efforts in the absence of a major international funding drive is problematic, said Samer Abboud, an associate professor of international studies at Arcadia University who studies Syrian capital flight.

“We are at a point now [where the Syrian authorities] are trying to cultivate businesspeople to return, but a few years ago regime officials were calling for them to be blacklisted and forbidden from returning,” Abboud told IRIN. “Sure, things change, but there's no reason to believe that businesspeople would trust the regime.”

Abboud noted that many formerly influential Syrian business owners have long since reinvested their money abroad and adapted to life in a new country, and that there is a high threshold to resuming economic activities in Syria – not just because of old police warrants.

Much of the Syrian economy is tied up in politicised and corrupt patronage networks that will be hard to access for diaspora investors or returning refugees. “Those deemed loyalist will be first in line,” Abboud said. “How can the business person who has been in Turkey for five years access those contracts?”

And while there are of course wealthy and powerful loyalist entrepreneurs still in Syria, Abboud pointed out that many of them made their fortune as political fixers or through sanctions-busting, rather than through manufacturing or productive investment. They “do not have the same productive potential or capital as the pre-conflict elites,” he said. “This makes them more parasitic and less likely to stimulate production. They’d need capital.”

The Syrian government seems determined to control the process of reconstruction, and its vision of the future seems to owe more to old-school Ba’ath Party socialism than to any plan for attracting investors. In a future Syria, “there won’t be strong companies or financial institutions, but the opposite”, Mayaleh, the economy minister, insisted in his Lebanese TV interview, equating international investments and loans with political interference.

Judging by such statements, al-Assad’s once mostly market-friendly economic team may have accepted that, for now at least, Syria will have to settle into the role of a Mediterranean Myanmar: an isolated and dysfunctional military state drip-fed on a meagre diet of humanitarian aid and financial assistance, while trapped in a perpetual tug-of-war with foreign nations and renegade regions over investment, aid, and resources.

In the absence of a political settlement or a clear military victory in Syria, international reconstruction efforts will likely be sluggish, messy, and fragmented.

A lack of consensus on how and where to help may even be used as an excuse by some nations to remove themselves from reconstruction planning. The differing international priorities may also engender new types of conflict and contribute to the splintering of Syria. Several Syrian regions are now effectively under international protection: the US Air Force patrols Kurdish-held regions in north Syria; Turkey controls the border region east of Aleppo; and Russia is backing the al-Assad government. If these divisions are kept in place and coupled with separate streams of foreign funding that aim to develop rival areas in isolation from each other, the long-term division of the country seems a likely outcome.

However, in so far as there is a shared goal of restoring basic stability to Syria, the al-Assad regime clearly has the upper hand due to its control over the majority of the population, the central government bureaucracy, and an institutional presence stretching deep into insurgent regions.

Reconstruction planning that seeks to bypass government-held areas to instead focus on rebel-controlled thinly populated rural regions may seem politically attractive to European and US decision-makers, but it will have a very limited impact on Syria’s overall economic recovery. If the idea is to stabilise Syria and make civilian life bearable by creating jobs, rebuilding the infrastructure, restoring healthcare and education, and facilitating the return or resettlement of displaced populations, then it will be impossible for foreign donors to ignore al-Assad’s central government or the territories under its control.

How to deal with that fact is a political choice. All options may seem unpalatable in their own way, but if you’re looking for pleasant choices, you’ve come to the wrong civil war.

(TOP PHOTO: The city of Homs, Syria bears the scars of the conflict. Pawel Krzysiek/ICRC)