Marked by the first World Humanitarian Summit in May in Istanbul, 2016 was supposed to be the year to #ReShapeAid. The gathering failed to live up to its enormous hype, but the resulting Grand Bargain showed the direction of travel on a host of important humanitarian issues ranging from transparency to multi-year funding, from less earmarking and more localisation to greater collaboration between humanitarian and development actors.

The jury remains out on whether many of the pledges made in Istanbul will be fulfilled, but 2016 did see these three innovations or initiatives gain traction:

Humanitarian funding needs are higher than ever, but a quick look at the numbers shows that the funding gap for emergency response is widening. Finding new ways of financing aid is a priority.

Officially launched at the WHS in May, the International Committee of the Red Cross’s humanitarian impact bond aims at diversification by introducing hitherto untapped private investment into humanitarian funding.

“We cannot just wait for the conflict to stop, and say – then development can come, and then investment can come,” Yves Daccord, the ICRC’s director-general, told IRIN.

The concept is as follows: a social investor finances the launch of a project they think will have a significant positive outcome. This is a private investor, who should be able to “invest seriously”, as Daccord puts it.

Then enters an outcome funder, most likely a foundation or government, who pledges to finance the entire project if the pre-defined results are achieved. The outcome funder pays the social investor back, adding interest dependent on results. For example, the Belgian government has pledged 10 million euros in support of the ICRC’s physical rehabilitation programme, but it will only spend the money if the impact of the project is deemed satisfactory. 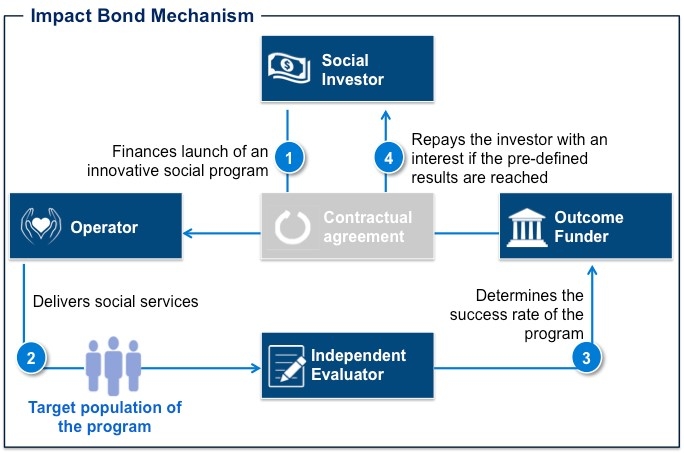 The ICRC’s humanitarian impact bonds require a five-year bond commitment, as Daccord explains. This should allow NGOs to think longer-term, and is in line with growing demands, expressed often at WHS and since, for multi-year financing.

Among the benefits, according to the ICRC, are a renewed drive to innovate in order to improve humanitarian outcomes; an incentive for private investors to be involved in humanitarian funding; and a real focus on a project’s results. Additionally, the humanitarian impact bond is not pegged to market fluctuations.

But there are doubts about the sustainability of the concept: donors get additional guarantees on results, but they also have to pay extra to cover the social investor’s interests.

“There is a premium involved: the investor expects to profit from it ultimately” Lydia Poole, a humanitarian finance consultant, told IRIN. “So if the donor could have funded this intervention through a grant funding anyway, the improved result that they get out of this instrument would have to be quite significant in order to justify the payment of this additional premium.”

2016 was the year cash programming came of age. The shift towards the greater use of cash transfers as aid was generally endorsed at the WHS. World Vision and the International Rescue Committee pledged that one half and one quarter of their programming, respectively, would be in the form of cash by 2020, but the Grand Bargain fell short of giving firm targets for the expanded use of cash as aid.

Following the WHS, the UN’s refugee agency, UNHCR, announced it would double its use of cash-based assistance by 2020.

But while these commitments are significant, it’s the follow-through that makes a real difference, explained Paula Gil Baizan, advocacy coordinator for the Cash Learning Partnership (CaLP).

“I’m hoping if 2016 was the year of talk, 2017 will be the year of action,” Baizan told IRIN. “I would not say [2016] was the year that made cash mainstream, because it was a year when lots of people publicly committed to making it go mainstream,” she continued. “But I am hoping 2017, 2018, and 2019 will be when it goes mainstream, based on commitments made this year.”

While delighted that policymakers and donors are now keen to jump on board the cash train – it was once the domain of technical experts – Baizan stressed that it will be important to keep an eye on how individual countries make it work.

The limitations of such schemes are bound to become clearer as pilot programmes are rolled out. When IRIN investigated the use of cash for refugees in Lebanon, for example, it found that they can’t take care of needs that defy market solutions; build local institutions; catch every problem case; or empower local NGOs to play a greater role.

Launched by the International Council of Voluntary Agencies (ICVA) as well as affiliated NGOs and networks in December 2015, the Less Paper More Aid campaign aimed to significantly reduce time-consuming and costly bureaucracy in the aid sector.

A first report was published in April, concluding that the sheer amount of bureaucracy in aid organisations was keeping frontline aid workers out of the field. The NGOs studied had an average of 36 reporting deadlines per country per year. For some, the number was as high as 80. The study also indicated that “typically NGOs take 440 hours to complete each audit, involving seven staff across various functions; while eight members of staff are involved in the preparation of each individual donor report”.

At the WHS, the Grand Bargain committed signatories to make aid more efficient, including by harmonising donor proposals and reporting, and earmarking less funding to specific projects. The campaign has now designed an inclusive process that it hopes to implement over the next two years.

"Our focus now is to bring together the people who write reports and the people who read reports to collaborate in ways that will help us collectively achieve the Grand Bargain commitments by the end of 2018," Melissa Pitotti of the ICVA network told IRIN in an email.

2016 also saw the launch of a number of other important initiatives including the Humanitarian Quality Assurance Initiative, the Charter 4 Change on localisation, and the NEAR network of southern NGOs.