The Kenyan government has postponed its closure of the Dadaab refugee camp by six months, but the reprieve does not reverse its ultimate decision to send home 261,000 Somali refugees, despite the loud protest by human rights groups.

The international community appears to have given up on a search for an alternative to closing Dadaab, even though the mass returns promised by Kenya, starting in just four months’ time, are likely to generate a humanitarian crisis.

The donors have also been slow to provide promised funding to Somalia to help improve conditions in a country that is already struggling to cope with 1.1 million internally displaced people.

Joseph Nkaissery, cabinet secretary for the interior, told a media briefing on Wednesday that insecurity in Somalia and the country’s ongoing elections, were creating a “delicate situation”, which required an extension of the government’s end of November deadline.

“However, ongoing voluntary repatriation will continue uninterrupted,” he said, referring to an existing programme facilitated by the UN’s refugee agency, UNHCR, and its NGO partners.

Over the next six months, the government plans to verify the refugee population in Dadaab and relocate all non-Somalis to other camps in the country. In the fourth and fifth month of the extension period, it will complete the repatriation of all Somali refugees to Somalia, “in a humane, safe and dignified manner”, a government statement said.

“As long as Kenya denies Somali refugees secure legal status and threatens to close camps and deport them, refugees will feel they have no choice but to go home with UN return support cash instead of being forced out with nothing,” she noted.

“Extending the Dadaab camp closure deadline is better than deporting refugees in two weeks’ time. But with the new 31 May deadline hanging over them, Somali refugees will continue to feel that they have to leave.”

Human rights groups point out that even before the election, planned for the end of the year, Somalia was neither safe for return, nor did it have the public service infrastructure to cope with an influx of arrivals from Dadaab.

In a veiled rebuke to UNHCR, Amnesty International said in a report on Tuesday that “the dangers associated with the armed conflict in Somalia have been greatly underreported to the refugees by the UN and NGOs facilitating the return process from Dadaab to Somalia”.

The Kenyan government’s revoking of Somali refugees prima facie right to stay in Kenya, the pressure applied to refugees to leave – including a reduction in Word Food Programme rations - means “the return programme is not voluntary and is in fact forced”, Khairunissa Dhala, one of the authors of the report, told IRIN.

Since December 2014, more than 19,000 refugees have returned home under the assistance programme.

According to a poll carried out by the Kenyan government and UNHCR, in July and August, only 25 percent of refugees said they were willing to return. Nevertheless, there is a feeling of inevitability in Dadaab that the 25-year-old complex will close.

"As long as Kenya denies Somali refugees secure legal status and threatens to close camps and deport them, refugees will feel they have no choice."

“I have packed my stuff and I’m ready to return, even though I know very well that Somalia is not yet stable. There is violence, persecution still going on; no good schools on the other side [of the border],” Aden Farah, in Kambioos camp, told IRIN. “But there is a lot of fear here in Dadaab that the government will force us back, so I want to return when conditions are good.”

That means taking advantage of the UN’s relocation package, which provides a cash grant per head for each family.

It is a significant inducement, especially for those who are fairly recent arrivals and believe they can pick up their lives once back in Somalia. But the reality is that re-starting a life is far from easy.

Fatuma Hamid came to the southern Somali port city of Kismayo in September, after more than 20 years in Dadaab. When IRIN met her outside the Jubaland Refugee and Internally Displaced Persons Agency, she was close to tears.

The 60-year-old mother of four was paid $600 in Dadaab and used $500 of that to settle her debts. When she arrived in Kismayo, she was given another $300, but found it was not enough to cover her rent and food.

What was free in Dadaab now has to be paid for, and that has taken some getting used to. Once a week, she walks from the IDP camp to the agency to see if they can help.

“I always wanted to return, but I never imagined I would return home to such a situation,” she said. “Life was good at the camp. All my four children went to school. They all had secondary education.”

But in the last few years it became a lot harder. The cut in food rations in August last year played a part in her decision to leave, she said.

Mohamed Noor, vice chairman in the Jubaland Refugee Agency is sympathetic, but there’s not much he can do to help. The Jubaland government had earlier asked for the suspension of the repatriation programme as it was already overstretched.

“The returnees have been going from one government ministry to another looking for help. They cannot get the services they had in Dadaab camp,” Noor explained. “If more people are brought to Kismayo, the ones who were here before them will have nothing.” 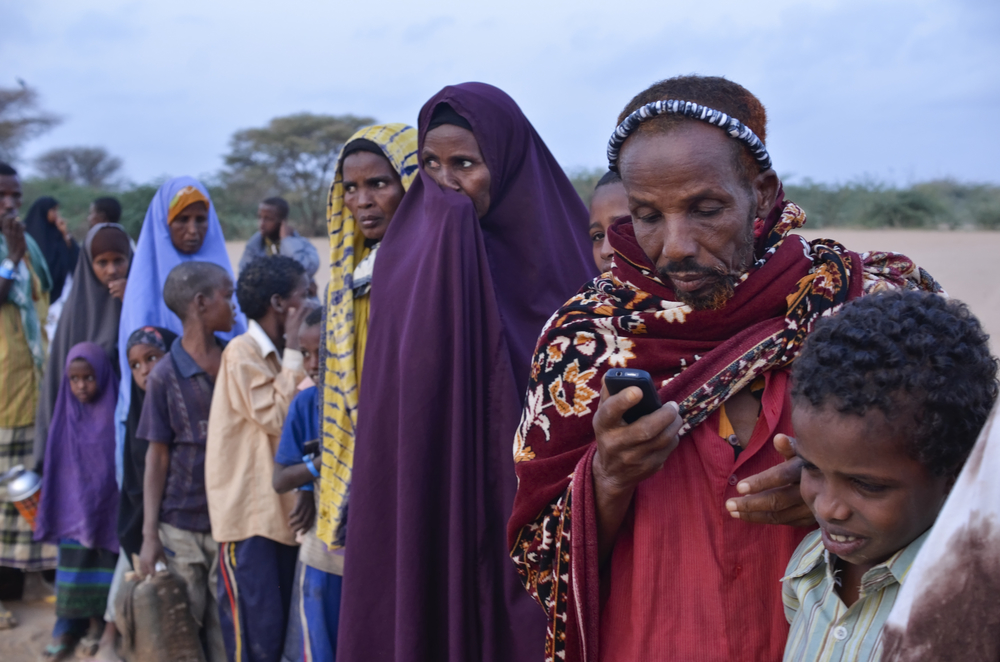 Internews
Sahal Gure Mohamed, 62, texts on his mobile phone while waiting in line at dawn to register at Ifo refugee camp in Dadaab, Kenya.

Insecurity is another major worry. Many of the returnees are not from Kismayo. But the threat of intimidation and forced conscription by the al-Shabab militant group, which remains firmly rooted in the countryside, forces them to stay as IDPs in the city.

Guray Hefow Abdi had a shop and cattle in her hometown of Dinsor, in Somalia’s Bay region. But war and drought forced her across the border to Dadaab in 2011.

She took advantage of courses run in the camp and found work with a number of international agencies looking after the physically and mentally challenged; an experience she hoped would help her find a job in Kismayo.

But in making the journey by road from Dadaab to Kismayo, through al-Shabab checkpoints, she realised that her certificates and commendations were a liability. She hid what she could in her robes, and got rid of the rest.

“It was too risky to carry the certificates through the al-Shabab-controlled territory,” she said. “These documents are my only hope and my future.” Despite her certifications, she is still looking for work.

The Amnesty report highlights a spectrum of vulnerable groups among the refugees who the Jubaland authorities will struggle to settle. This includes secondary school students (in a region with few schools and teachers); those with disabilities; and minority ethnic groups like the Bantu, who are outside the clan system.

“Some returnees have children who were in school in Kenya. If they cannot get education for their children in Somalia, then we fear some of these children could become criminals,” Noor told IRIN. “Worse still, some may join al-Shabab and other groups with extreme ideological views.”

Dhala said Amnesty International was calling on the Kenyan government, in the short-term at least, not to close Dadaab.

“In the longer term, we’re calling on them to seek more sustainable approaches to refugees that ends the encampment policy, allows rights to integration within the host community, including the right to work,” she said.

At the moment, the Kenyan government doesn’t appear to be listening.

(TOP PHOTO: At the height of the 2011 Horn of Africa crisis, Dadaab received a huge influx of refugees mainly from Somalia. CREDIT: European Commission)