Central America’s Northern Triangle – encompassing El Salvador, Guatemala, and Honduras – is one of the most violent regions in the world outside of a warzone. Transnational gangs or maras have proliferated in the wake of decades of civil war and are largely responsible for a per capita death rate that rivals that in Syria.

The humanitarian impacts have become increasingly obvious over the last two years as more and more people, many of them unaccompanied children, have fled the violence and sought protection, mostly in the United States. An estimated 10 percent of the Northern Triangle’s population of 30 million has already left. For those forced to remain, weak and corrupt state institutions have failed to improve their access to health, education, and justice in city neighbourhoods that have been carved up into “territories” by rival gangs, and where schools have become places of recruitment and kidnapping.

Humanitarian agencies, more used to working in classic conflict settings or in the aftermath of natural disasters, are starting to wake up to the need to respond to the Northern Triangle’s epidemic of violence. Organisations like the International Committee of the Red Cross and Médecins Sans Frontières are leading the way, but their programmes are small-scale and, in terms of their reach, “very much the tip of the iceberg”, according to Robert Muggah, director of the Igarapé Institute, a Brazil-based think tank that focuses on security issues.

“There’s still a slow recognition of the scale and magnitude of the problem,” he told IRIN. “There are still considerable apprehensions in the humanitarian world about how best to engage.”

How do you engage with gangs?

Gangs in the Northern Triangle are financed by a range of organised criminal activities, from more localised extortion and smuggling rackets to the trans-regional trade in narcotics, much of it bound for the United States.

The Igarapé Institute’s projections suggest that homicide rates in the Northern Triangle will continue to rise over the next 20 years, even as they fall in other parts of the world.

“This creates a conundrum for the humanitarian community,” said Muggah, explaining that, in terms of International Humanitarian Law, gang violence is not defined as an armed conflict, even if the consequences for local populations can be just as devastating and deadly. 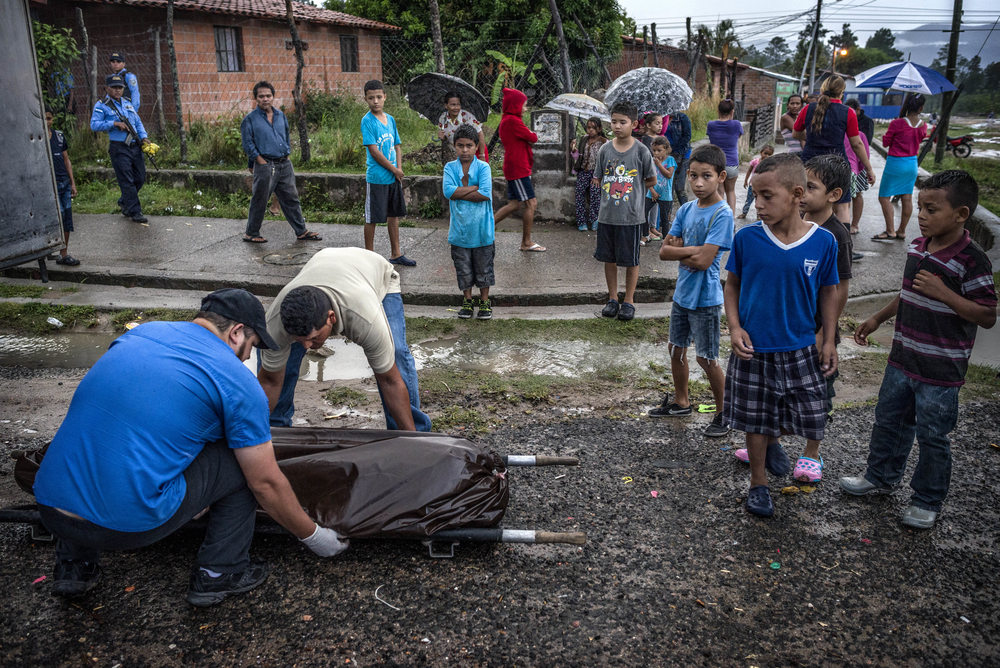 Antonio Aragon/ECHO
Children look on as paramedics take away the body of a man executed in his home in Ciudad España, near Tegucigalpa

In practical terms, this means that humanitarian agencies responding to gang violence cannot expect any special protection and may themselves become targets. Attempts to negotiate access with gang members controlling a particular “territory” where agencies want to work can also be deemed a criminal offense.

“If you meet with a convicted killer and don’t report their whereabouts, you could be charged with a crime of association. It does raise a big red flag for some agencies, because they no longer have the immunity under IHL to engage in these kinds of negotiations formally,” said Muggah.

Joaquim Guinart, MSF’s field coordinator in Tegucigalpa, the Honduran capital, said his organisation does not attempt to engage with gangs in “red areas” of the city where levels of crime and violence are highest and the organisation is providing care to victims of sexual and other types of violence.

“Always the gangs have people keeping watch in different parts of the neighbourhood. When they approach us, we explain what we’re doing and they accept it,” he told IRIN. “We monitor violent events through the media and schools. Now, mass killings of several people at once are increasing and the gangs are often fighting for territory, which is putting us on alert.”

The ICRC, which runs programmes providing assistance to returning migrants and communities affected by armed violence in all three countries, does not rule out talking to the gangs.

“We would at some stage attempt to have some dialogue with the gangs. We don’t talk about what it is we discuss with them,” said Yves Heller, the ICRC’s communications coordinator for the region.

He added that “it is a completely different dynamic” than talking to armed actors in the context of a conflict, where “you’re dealing with some very clear principles”.

Humanitarian intervention in violence-hit slums – from whether to how

The need to coordinate humanitarian efforts with local government departments also raises what Muggah described as “existential questions for agencies that seek to remain neutral and impartial”.

“In urban violence situations, if you don’t have some alignment with different sectors of the government, then you’re just applying light band aids that are quickly ripped off,” he told IRIN. “It means lowering a flag, not necessarily waving your agency identity and engaging in complex negotiations with governments to help them supplement gaps.”

He added that governments in the Northern Triangle have been wary about accepting help from humanitarian agencies because of the message it can send about the dire state of security in their countries.

“It took a lot of communication, clarification, and dialogue between groups like the ICRC and governments to ensure there was a common understanding. There were situations where the ICRC was taken to task for communicating findings that were seen to be reflecting negatively on the country in question,” he said.

The biggest dividend for small-scale humanitarian interventions in this region can be the extent to which local governments attempt to replicate them.

When MSF began providing care to sexual violence victims in Tegucigalpa four years ago, for example, there was no national protocol for treating such patients.

“Now, the government is going to introduce a protocol for sexual violence, and that is something we’ve been fighting for,” said Guinart. “Our work has given us legitimacy to talk about these things.” 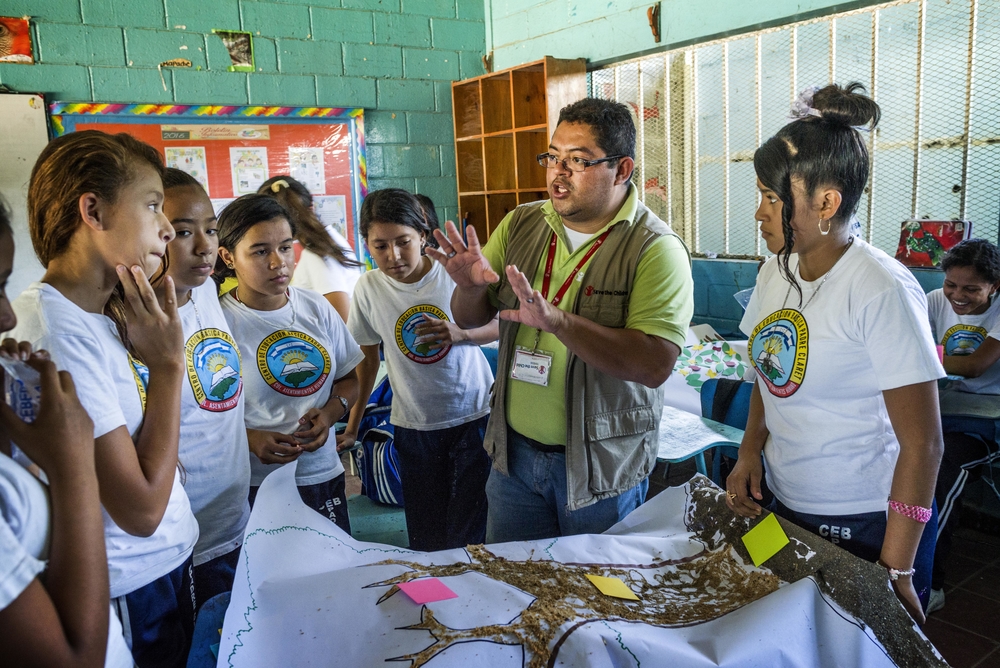 Antonio Aragon/ECHO
A Save the Children workshop for adolescents in one of the most violent neighbourhoods in San Pedro Sula, Honduras

Through multi-disciplinary teams consisting of doctors, nurses, social workers, and psychologists, MSF is also “trying to demonstrate to health authorities the need to address this in a more holistic way,” said Henry Rodriguez, the organisation’s head of mission for Mexico and Honduras.

“We don’t pretend to change behaviours or the origins of the violence, but at least we can raise awareness about the need to give more support to this population.”

Encouraging more humanitarian agencies to start programmes in the Northern Triangle will depend to a large extent on finding willing donors.

The only major donor currently funding humanitarian programmes in the region is the EU’s humanitarian aid department, ECHO.

“Development donors are doing great work in terms of violence prevention, but in terms of humanitarian response there’s very little,” said Vicente Raimundo, ECHO’s regional head for Central America. “It’s a paradox, because usually it’s the other way around.”

“I think that we all have failed in acknowledging that we have a humanitarian problem."

ECHO is partnering with the UN’s refugee agency, UNHCR, to help displaced populations in El Salvador, and with the Norwegian Red Cross and the Norwegian Refugee Council in Honduras and El Salvador to make schools safer and children less vulnerable to recruitment by gangs.

But major gaps remain, particularly in the health and education sectors. “It’s about psychosocial support, and also the needs of people who can’t get to a hospital because it means crossing certain territory [that belongs to a rival gang]. It’s about kids being threatened, recruited, and extorted in schools,” said Raimundo. “I think that we all have failed in acknowledging that we have a humanitarian problem."

Not just a US problem

Muggah noted there has been a general decline in aid to Latin America in the last five to 10 years and that many donors view the situation in the Northern Triangle as in “the US’s backyard” and therefore something American donors should be addressing.

US-funded initiatives have tended to focus on law enforcement and addressing drug trafficking, although the more recent Strategy for Engagement in Central America will also aim to boost economic development, reduce violence, and strengthen government institutions.

There’s been a slow but growing acknowledgement of the need for a stronger humanitarian response to urban violence in the Northern Triangle, said Muggah, but aid agencies are “struggling to find what their added value is”.

While organisations like MSF and ICRC have started experimenting with various interventions, “some agencies have kept their heads in the sand and not got involved in the messy and often highly politicised work of [responding to] urban violence.”

“In the meantime,” he added, “there are enormous needs in these areas, and if the goal is to reduce suffering and to promote protection, the humanitarian world can play a role.”

(TOP PHOTO: Soldiers patrol a neighbourhood in Comayagüela, Hondruas, in March 2016 after the Mara 18 gang threatened residents with death if they didn't leave their homes within 24 hours. Antonio Aragon/ECHO)