Southern Africa is facing the threat of extensive crop failures this year as a result of record low rainfall in a region in which 29 million people already don't have reliable access to enough affordable and nutritious food.

“With little or no rain falling in many areas and the window for the planting of cereals closing fast or already closed in some countries, the outlook is alarming,” the World Food Programme has warned.

“The region is ill prepared for a shock of this magnitude, particularly since the last growing season was also affected by drought. This means depleted regional stocks, high food prices, and substantially increased numbers of food insecure people,” the UN agency said.

Southern Africa is feeling the impact of an intense El Niño that began last year. According to the Famine Early Warning Systems Network, continued below-average rainfall and high temperatures are likely to persist in 2016, with the food crisis lasting into 2017.

The following are the worst-affected countries:

The biggest victim of the drought. It’s the region’s main maize producer, but last year output fell 30 percent below the bumper 2014 season and it may have to import around 6 million tonnes. Planting of the 2016 cereal crop began later than normal due to delayed rains. Small-scale farmers have been hammered by the drought, with emergencies declared in five out of nine provinces, as well as areas of two other provinces. There have been reports of farmers committing suicide.

The 2014/15 cereal harvest was 24 percent down on the five-year average. Currently, 2.8 million people are "food insecure" (they lack access to food that's sufficient to lead healthy and active lives) out of a population of 16 million as a result of flooding and drought last year. Average maize prices were at a record high in December 2015. The government’s $146-million Food Insecurity Response Plan is so far 48 percent funded.

The 2014/15 cereal harvest was 42 percent down on the five-year average. An estimated 1.5 million people are food insecure, with 600,000 in "crisis" - meaning they are forced to skip meals, there are high rates of malnutrition, or have sold their livestock to make ends meet. A new vulnerability assessment is under way and the figures are likely to be even worse. Zimbabwe’s $132-million drought response plan is 44 percent funded.

A drought that scorched Namibia spread into Angola’s three southern provinces – Cunene, Huila, and Cuando Cubango. Whereas Namibia is on top of its crisis, Angola, even though it is Africa’s second largest oil producer, is not. In Cunene, 800,000 people – 72 percent of the population – have been hit by crop losses and livestock deaths, with child malnutrition rates beyond the emergency threshold of 15 percent. “The situation is worsened by insufficient resources, including human, logistical, critical nutritional and medical supplies, and funding,” according to UN sources. Nationwide 1.25 million are at risk.

El Niño's climate impact splits the country in two – in the north there has been flooding, in the south drought. More than 176,000 people are in crisis in the provinces of Gaza, Inhambane, Sofala, and Niassa, until at least the next harvest. A further 575,455 people are food insecure, especially in Zambézia, Maputo, and Niassa provinces. Around 50,300 people are receiving food assistance in Gaza and Sofala.

Zambia has been an exporter of maize to the region, but last year’s production was 21 percent down on 2014. Zambia’s ample stocks enabled it to still export to neighbouring and needy Zimbabwe, but close to 800,000 Zambians are also at risk of food and livelihoods insecurity. 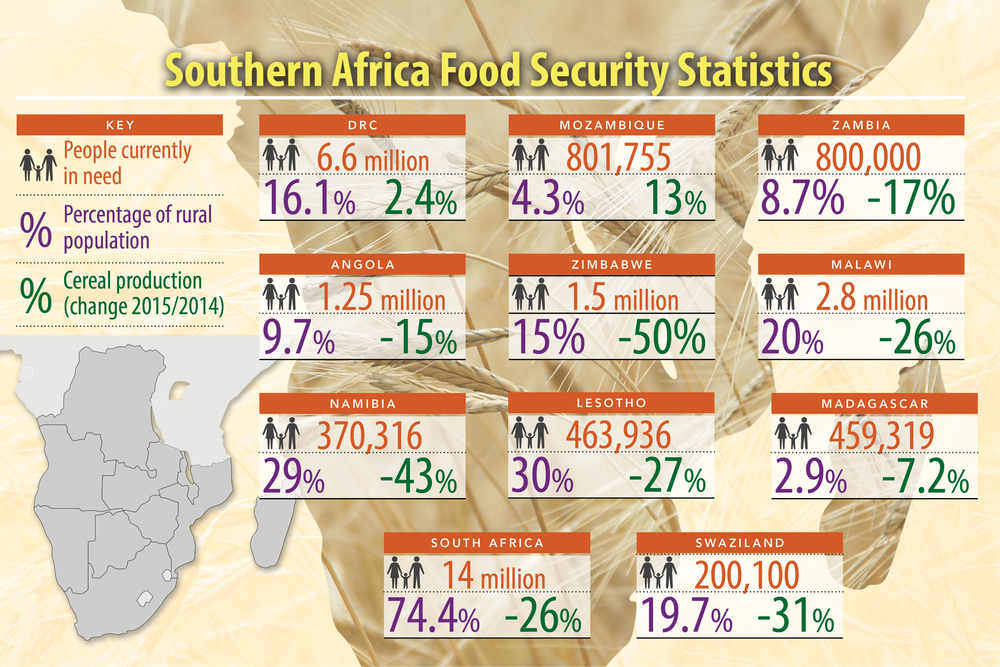 Some 650,000 people – one third of the population – do not have enough food.  Some projections indicate the numbers affected could surpass 725,000. Water rationing is under way in several districts, impacting not just agriculture, but also industries, schools, and hospitals. Water shortages are increasing the likelihood of waterborne and livestock diseases. The government has committed $9.7 million towards a $36.5 million appeal.

One of the countries least able to cope with crisis. Though nominally a low-middle income country, levels of stunting among children are historically around 31 percent. More than 201,000 people out of 1.1 million – one fifth of the population – are food insecure. Maize prices have increased by 66 percent in a country in which just under half of the population are unemployed, and which has the world’s highest rate of HIV infection. Livestock have succumbed to the drought, and carcasses of cattle are now a common sight in the fields that used to feed them. Swaziland is ruled by an executive monarchy, with a reputation of lavish spending on white elephant projects. And yet its central bank has released only $75,000 for drought relief.

The 2015 maize crop was 44 percent lower than 2014’s (above-average) output.  Around half of all dryland commercial farmers experienced total crop losses as a result of the drought and high temperatures. An estimated 370,316 people are food insecure and the target of a government drought relief programme.

The Democratic Republic of Congo

* The story has been amended to better define "food insecurity"