When the young English woman Eglantyne Jebb decided to hand out leaflets in London’s Trafalgar Square in 1919 protesting the continuing post-war blockade of Greece and the resulting serious food shortages, she was quickly arrested. At trial, she was found guilty – but the prosecuting council was so impressed with her that he offered to pay her fine of five pounds. That money became the first ever donation to Save the Children.

Founded in 1919, Save the Children was, in the words of historians Peter Walker and Daniel Maxwell, “the first recognisable transnational humanitarian NGO”, but more quickly followed. And the themes of Save the Children’s foundation story – an individual not previously involved in aid, overcome by a humanitarian impulse in response to a specific crisis, and a small donation that snowballed – have become familiar over the years. Most major NGOs have a similar tale of their origins.

World Vision’s website tells the story of its founder, Robert Pierce, who gave his last five dollars to a teacher taking care of an abandoned child, after she asked him: what are you going to do to help?

Oxfam was founded by a group of concerned citizens led by British businessman Cecil Jackson-Cole – who also later founded ActionAid and Help The Aged (now Age UK) – in response to another blockade, this one during World War II.

Médecins Sans Frontières was created by a small group of doctors and journalists in response to the Biafra crisis.

“How an organisation came into being is important,” note a group of historians in a book on the history of British NGOs. “[It] can be integral to how that organisation both evolves and perceives itself. Sometimes, these origins achieve a mythology of their own, which can subtly inform perceptions both for staff and supporters.”

The historical realities behind these stories, however, are more complex, and more interesting, offering an insight into the foundations of organisations and how they behave today.

Jebb trained as a teacher and worked for years for the Charity Organisation Society, which focused on bringing a modern and scientific approach to aid work. Jackson-Cole had a degree in economics from the University of Oxford and was involved with the Soldiers and Sailors Home – a facility that took care of off-duty soldiers – in Watford, England. Even Henry Dunant, founder of the Red Cross and Red Crescent movement, was more than the simple Swiss businessman often portrayed: as a young man he joined the Geneva Society for Alms Giving and gave much of his free time to prison visits and social work.

As Nicholas Crowson, Matthew Hilton, Jean-Francois Mouhot and James McKay write in their historical guide: “many NGOs were the product of professionalised middle classes who brought with them considerable social, cultural and intellectual capital.”

Far from remaining groups of dedicated volunteers, many of the big NGOs began professionalising extremely quickly. Jebb applied the principles she had learned in the Charity Organisation Society – central to her thinking was the importance of a planned, research-based approach. She quickly recruited a business manager, Lewis Golden, to put the organisation on a business-like foundation.

Nor did these organisations subsist for long on local donations. Save the Children identified from the start the importance of professional fundraising, as did Oxfam. Golden took out full-page advertisements in national newspapers to ask for donations. The move was innovative, but it worked and substantial funds were raised for the new agency’s work. Jackson-Cole took a similar approach – Oxfam too turned to full-page adverts in the media, and also established the first charity shop in the UK in 1947, on Broad Street in Oxford. Oxfam’s Greek Famine Relief Week featured film shows, performances of Greek dancing, concerts, and other events. The whole effort, including the gift shop, raised $54,390, a remarkable effort for one town in wartime, and far higher than the $16,120 target. 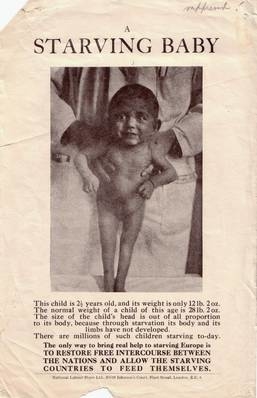 Interestingly for a leading organisation in an industry that is currently wrestling with the challenge of working with the private sector, Oxfam founder Jackson-Cole’s personal philosophy was rooted in the idea that charity and business needed each other. His view was that the funding of charities should come from businesses established for that purpose. “He made clear to the staff recruited to set up Andrews & Partners that the purpose was to assist charity through the new business,” the company he founded says on its website today. “He intended to attract a team of public-spirited business people who would achieve good profits with highest integrity; and would assist charity not only by providing financial support out of profits, but by executives and staff involving themselves in carrying out charitable objects.”

Another issue modern organisations wrestle with is the challenge of working with faith, including faith-based organisations. World Vision of course has remained an explicitly Christian organisation. But the roots of many NGOs are also in fact deeply religious. Raised by Anglican parents, Jebb had visions of Christ in her 20s that influenced her deeply (she also studied Hindu texts) and turned first to the Church for financial and moral support when founding Save the Children.

Jackson-Cole was a devout Christian whose faith was a key motivating element in his humanitarian work and who saw his mission to relieve suffering as a vocation. He established explicitly faith-based foundations and trusts to provide financial support to the charities he founded. His most significant foundation, the Voluntary and Christian Service Trust, gave rise to ActionAid and Help the Aged, among other organisations. Many of the others who founded Oxfam were Quakers.

Henry Dunant was a devout Calvinist whose early charitable work in Geneva was entirely through religious groups, and who saw his idea of providing assistance irrespective of allegiance as entirely consistent with his faith. This question of “immense and worldwide importance”, he wrote in his book Memories of Solferino, needed to be solved “from the humane and the Christian standpoint”. The contradiction now widely assumed in the humanitarian world, between principles of neutrality and impartiality and the profession of a particular faith, would have seemed alien to all of them.

Few of the founders of major NGOs had any first-hand experience of the countries or crises that inspired their response. Jebb had never been to Greece (her sole experience of overseas assistance being a trip to Macedonia in the 1930s): her interest was piqued by media reports. Three decades later, the same was true of Jackson-Cole, who also knew nothing of the political, cultural, and economic realities on the ground in Greece. Pierce, founder of World Vision, travelled to China where he met the teacher and child who inspired his decision to sponsor them, but had no previous experience of working overseas.

Of the major international aid organisations, MSF stands out as the one founded by people with prior operational field experience. Max Recamie, Bernard Kouchner and Pascal Greletty-Bosviel were doctors who had worked in Biafra. MSF’s first mission, however, was to Managua in Nicaragua, where an earthquake in 1972 destroyed most of the city and killed up to 30,000 people. Few other early international NGOs initially placed much value on gaining an understanding of the countries in which they worked, as is so important today.

The emergence of national NGOs within Europe dates primarily to the nineteenth century, to the industrial revolution and the emergence of a new social class: educated, financially successful, and with the time and energy to devote to activities other than survival. This in turn meant the possibility for organisations dedicated to sharing professional expertise such as medicine, and the emergence of caring as a formalised activity. It is notable that Dunant’s father worked in a prison and an orphanage, and his mother worked with the sick and poor. Jebb’s family were also very socially active.

Political, professional, at home with the private sector, deeply rooted in European mores and lacking field knowledge of the countries in which they sought to operate: history paints a very different picture of the founding and original nature of NGOs than is commonly acknowledged.