How long should it take a country to reopen its border with a neighbouring state after that state has been declared free of a deadly and contagious disease?

It’s a pertinent question for 38,000 Ivorians who initially fled political violence in 2010 to Liberia, but whose return home is now being blocked by their own government’s fears of the Ebola virus. This is despite the fact that Liberia was declared Ebola-free on 3 September, almost two and a half months ago.

The World Health Organization’s answer is, essentially: no time at all. While WHO advocates screening measures at border points, it does not recommend outright closures, nor did it, even at the height of the Ebola outbreak.

Border closures have negative social and economic impacts, particularly on traders, and there is no evidence that they are more effective than screening measures.

For Liberian authorities, the polite but firm answer is: immediately.

Liberia was first declared Ebola-free on 9 May, only for new cases to emerge in late June. This has led to fears Ebola could return for a third time.

In March, the two governments, along with the UN’s refugee agency, UNHCR, agreed to resume voluntary repatriations, but just when the border was about to reopen there were more confirmed cases of Ebola in Liberia and the programme was halted.

“There is a need for the process of repatriation to begin now that there is no more Ebola," Kemokai said. "Now, all that is left, is for the Ivorian government to open the border for their people to return.”

He added: “We are expecting an assessment team to come from Ivory Coast to look at the situation on the ground.”

The refugees are indeed keen to go back.

Mitta Kieta, a 45-year-old mother of six sitting under a tent in the Bahn refugee camp in Nimba County, fled her home in Ivory Coast nearly five years ago, following the 2010 post-election violence. For many years, she was too scared to return. Then, in 2014, just as she decided it was safe enough to go back, Ebola hit and the borders were shut down.

“For me, my entire family is in Ivory Coast,” Kieta said. “I am missing them… I want to go back now. I hope the border can reopen… I am tired of being here.”

Sellie Musa, a former taxi driver turned carpenter who fled to Liberia in 2010, had a similar story.

“At first I did not go back because I was not sure that things were fine in Ivory Coast,” he told IRIN. “But now I am awaiting repatriation. I have not returned because the border is still closed.”

In addition to the refugees in Bahn, there are also camps in Grand Gedeh and Little Wlebo.

UNHCR’s Diana Diaz, who helps with the voluntary repatriation programme, said around 12,000 Ivorian refugees had been able to return in early 2014.

“However, due to the Ebola virus disease outbreak, borders were closed and therefore voluntary repatriation has been suspended until further notice.”

So what about the Ivorian government? Its response is full of reassurance but a little vague.

"The repatriation of refugees in Liberia is not forgotten,” a spokesman from the foreign ministry’s Department of Aid and Assistance for Refugees and Stateless Persons told IRIN.

“It is not necessary that people be concerned,” the spokesman insisted. “The return of refugees will resume soon,” he added, without saying when or how these repatriations would take place.

UNHCR says it continues to provide services and skills training to the Ivorian refugees in Liberia.

“It is not clear when the border will reopen,” Diaz said. “So, for now, we are focusing on providing or facilitating their livelihoods so either if they stay here or if they return to Ivory Coast they can take some skills and resume their lives as soon as possible.”

Ivorian refugees in Liberia learn skills, such as carpentry, in order to earn a living as they wait 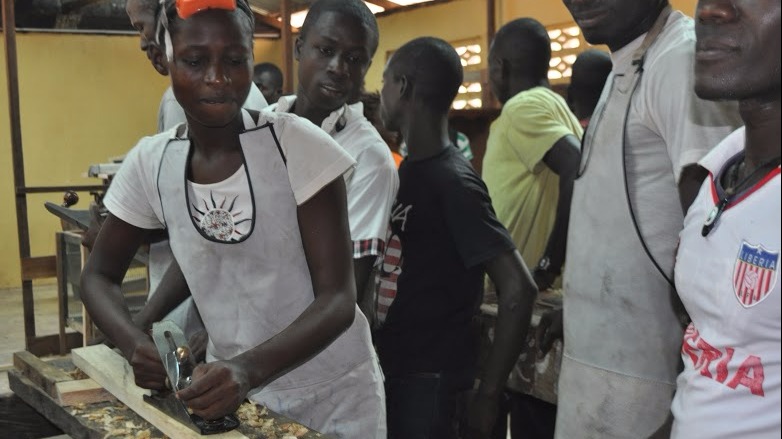 Ivorian refugees in Liberia learn skills, such as carpentry, in order to earn a living as they wait to be repatriated following border closures due to Ebola.

This includes providing core services such as health, education, water and sanitation, and promoting durable solutions for the refugees, such as primary and secondary education for children. Host communities have also been allowing refugees interested in farming to use their land.

But for many, this isn’t enough.

At least 8,000 Ivorian refugees have expressed an explicit wish to return home, according to UNHCR.

“I want to go back and play soccer,” said 20-year-old Laminee Tureh, who many in the camp consider to be a rising football star. “I want to play for my national team… I want to return to my home country.”

Musu Kieta, another Ivorian refugee, said she hoped the reopening of the border would happen sooner rather than later.

“I can’t wait to go back home,” she said. “I have spent too many years in Liberia. The Ivorian government needs to open the border for repatriation to start. We are Ivorians and we need to come back to our motherland. We have no other country than Ivory Coast.”

(Alexis Adele contributed to this report from Ivory Coast)