A number of key Kenyan NGOs have reacted angrily to the announcement that 959 local organisations will be deregistered for being unable to account properly for their funding, blaming a growing culture of political repression.

After an audit of 10,015 organisations, the NGO Coordination Board told a press conference in Nairobi that millions of dollars was unaccounted for, either because of discrepancies or the failure to file accounts.

Among the NGOs were ones linked to a leading politician, a leading human rights watchdog and the foundation of marathon athlete Paul Tergat.

Speaking to the media, the NGO Coordination Board’s CEO, Fazul Mohamed Yusuf, said the list had been forwarded to Kenyan banks with a request to freeze the accounts of those named until they comply with the board’s regulations. The list had also been sent to the government departments in charge of money laundering, he added, for “further investigation and possible prosecution”. Named organisations have 14 days to comply or be deregistered.

Citizen TV reported on their Twitter feed on Friday evening that Cabinet Secretary Anne Waiguru had revoked the deregistration of the NGOs “to give them time to comply with rules”.

But some of the NGOs involved flatly rejected the allegations, and accused the board of making accusations that are not only unfounded, but are politically motivated.

"Some on the list may be NGOs that are either not functional or non-compliant. But for some others it's a clear case of harassment, like the KHRC [the Kenya Human Rights Commission],” said Muthoni Wanyeki, Amnesty International Regional Director for East Africa, the Horn of Africa and the Great Lakes Region.

“This is an attack on all the key players working on governance in this country,” said Davis Malombe, acting executive director of the KHRC, one of the accused organisations. “They are going after us because of the work that we do.”

Malombe said the KHRC had learned of the allegations against it through the media, not through formal notification, and had had no chance to respond. “This is unprofessional, unethical and unacceptable,” he said. 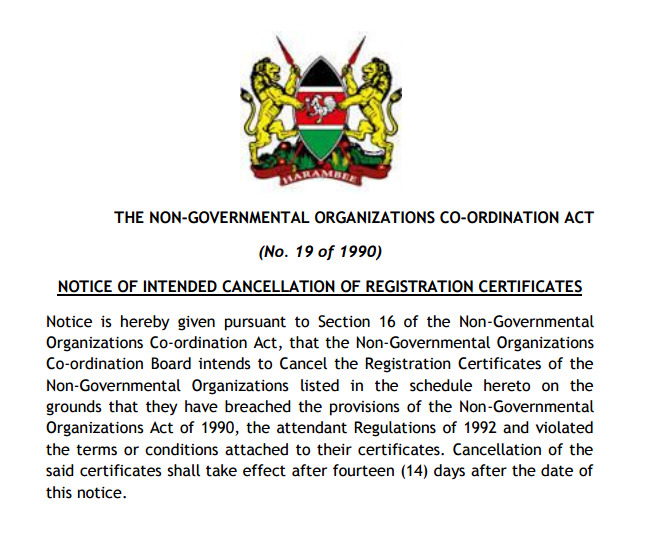 ADESO, African Development Solutions, another of the organisations listed, also said it did not recognise the amounts or allegations made in the board’s public statements.  “We have never received any formal correspondence regarding underreporting of funds, and are therefore not aware of where the figures currently being quoted in the media are coming from,” the organisation said in a statement.

The CEO of Ahadi Kenya, Stanley Kamau, meanwhile, showed local media the receipt he had received from the board confirming submission of the organisations’ reports. “It is irresponsible for the board to give names before giving us notices,” he said.

Malombe also dismissed Yusuf’s comments that the board was pursuing some organisations because they were suspected of funding terrorism as “wild allegations with no basis,” and said they were part of a wider crackdown on independent organisations working on governance in Kenya. “They are targeting us because of the work we do, which involves public accountability. In Kenya, there is a lot of mismanagement of public affairs. They are targeting the media, the trade unions, the opposition. This is an attack on all the key players working on governance in this country. Most of them are struggling for their lives.”

The NGOs are being supported in their protests by other civil society and advocacy bodies. In a public statement, the International Centre for Policy and Conflict – not among those named – said it was fully convinced that “the NGO Coordination Board is acting on behest of the Presidency with intent of intimidating and silencing [a] robust civic sector.” ICPC Executive Director Ndung'u Wainaina called for “an immediate end to intimidation of civil society.”

This is not the first time that the board has pursued NGOs. In December 2014, it threatened suspension of  510 NGOs for non-compliance, including a number of branches of prominent international NGOs.

At the same time, the board announced that a further 15 unnamed NGOs were under investigation for links with Somalia’s extremist al-Shabab.

In April, two prominent human rights NGOs, Haki Africa and MUHURI, were included in a list of “entities suspected to be associated with al-Shabab” published by the police. They have challenged the allegation in court, with limited success.