Earlier this year, an 8.1-magnitude earthquake hit Nepal, killing more than 8,000 people and displacing nearly three million. A few days ago, an earthquake significantly more powerful struck Chile. The epicentre was near populated areas, just 175 miles north of the capital Santiago, yet only 11 people died and only a few hundred houses were damaged.

After being hit by the planet’s largest-ever recorded earthquake back in 1960, Chile developed strict anti-seismic building codes. Despite this, an 8.8-magnitude earthquake in 2010 wreaked destruction in southern and central parts of the country. More than 500 people were killed by the quake and the tsunami that followed. More than 200,000 homes were flattened. Things had to change again.

Building codes were updated so structures could better withstand seismic waves. Strong columns and weak beams meant buildings would have a better chance of swaying with the tremors and avoiding collapse. Pressure was also exerted on planners for any new buildings to be constructed further from the sea.

According to Vicente Sandoval, a PhD candidate in Development Planning at University College London who is Chilean and specialises in the causation of disasters, the important point to note is that these changes weren’t just on paper, they were actually implemented by the authorities. “It is a matrix of circumstances and processes that allow the system of building codes to support itself and work,” he told IRIN.

In 2010, right after the quake, officials in Chile failed to give a tsunami warning before the waves crashed in. “There was a delay in communications on how the evacuation order was going to be interpreted and given,” recalled Alfredo Zamudio, the Chilean director of the Internal Displacement Monitoring Centre. “That caused [the] death of many people after the tsunami.”

Having learned from the past, better early warning systems are now in place. The National Seismological Centre in Chile functions around the clock since the government invested in a network of sensors throughout the country to record seismic activity. If there is going to be a big one, they’ll be alerted.

Two DART (Deep-ocean Assessment and Reporting of Tsunamis) stations, which detect underwater pressure changes, were also added to Chile’s northern coast in recent years as part of a more sophisticated tsunami warning system. Along with this, sirens set up in coastal regions were used by the navy on Wednesday to warn people of possible waves.

The Chilean public is made well aware of government powers during an emergency; troops may be deployed to prevent looting, while aid can be delivered to affected areas much faster. This results in “a respectful relationship and a dialogue between civilians and armed forces," according to Zamudio.

The national media has also played a part by promoting online tools, such as Facebook’s Safety Check feature, which asks those in the affected region if they are safe and sends a message to loved ones once their status has been confirmed.

But while such advances have helped, Zamudio is quick to add: “Technology doesn’t reduce the impact of disasters. It is the community when they are working together with the national government and when community-based efforts are in dialogue with national authorities.”

A Chilean Red Cross volunteer assisting with earthquake relief efforts in the city of Illapel. 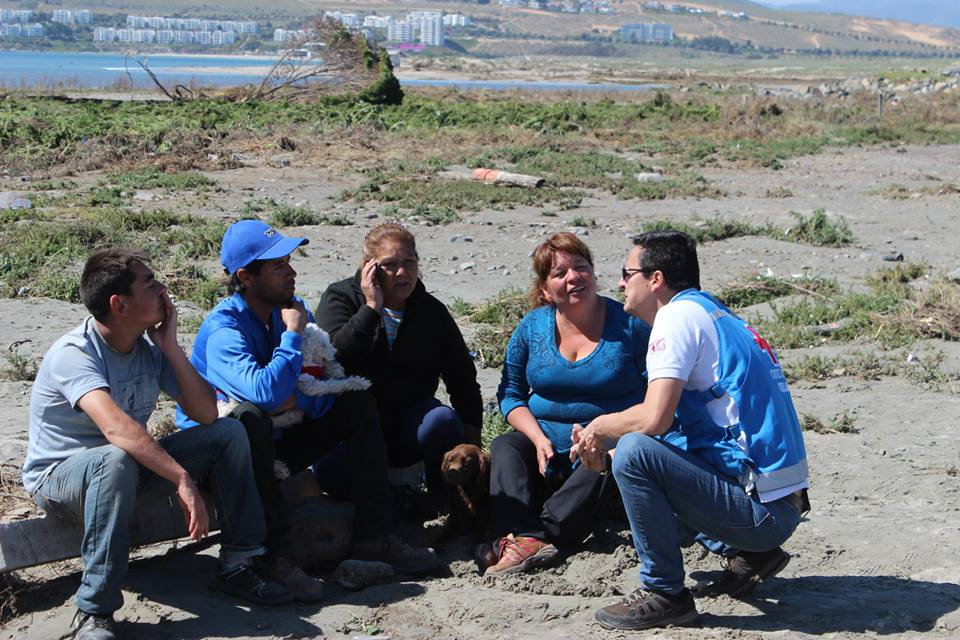 3) A culture of preparedness

Chile survived a big quake with relatively few casualties because it was ready for it. For many years now, local groups around the country have been familiarising themselves with disaster preparedness plans, practising countless earthquake drills and running through evacuation routes time and time again. The result? More than one million people were evacuated from coastal areas in a matter of hours, escaping the tsunami waves, some of which were 15 feet high in the region of Coquimbo.

Even young children are taught how to react if disaster strikes, as their teachers make them go through classroom simulations. “ONEMI (the emergency section of the Interior Ministry) have a programme called Chile Preparado, or Chile Ready,” said Sandoval. “They visit schools and municipalities to organise fairs [and workshops] and deliver emergency kits.”

On Thursday, Chilean President Michelle Bachelet praised the people's response, and said the death toll was “unfortunate, [but] not very high considering the strength of the earthquake." The combination of sophisticated early warning mechanisms and a prepared populace with a plan of immediate action were key and something other countries can learn from. “The drill is important but so is the perception of people that there is a leadership. That there is no chaos,” Zamudio said. “So when people are understanding that there are systems in place [and] information is clear… you will see the order that you saw on Wednesday."

Sandoval said it was a watershed moment for civil society in Chile after the 2010 earthquake. Disaster risk reduction was thrown into the public spotlight as various public officials and organisations including ONEMI were thoroughly scrutinised for their failure to disseminate emergency information and prevent loss of life. Widespread media coverage of the quake and tsunami also helped kick-start institutional reform, he added. So, what is the lesson?

That civil mobilisation can change the tide. Reform of Chile’s national strategies to deal with disasters was not only possible, but also popular. “ONEMI will not exist anymore, probably next year. We are going to have another institution that can deal with responses to disaster risk reduction in the long term,” said Sandoval. “It was a social demand. [And] until 2012, we also never had a disaster research centre in Chile in any academic institution. [It] was a milestone. [The government] is very concerned about what people think.” In other words, having a dialogue with the people is pivotal, not only after an emergency to assess what is needed, but also before a disaster strikes in the first place.

It would be too easy to say that countries like Nepal and Haiti should wholeheartedly follow Chile’s lead. Factors such as topography, differing poverty levels, and the lack of NGO access to deliver humanitarian relief are major factors to consider. Nevertheless, Chile’s experience does offer some big picture solutions, such as long-term investment in disaster risk reduction, better urban planning, and educating the public on how to react to such crises. It certainly wouldn’t hurt the Nepali government to pay attention.