In the weeks ahead of Monday’s highly contentious parliamentary elections in Burundi, a profusion of hate speech has been used as a key tool to whip up support in a campaign marred by harassment, intimidation and violence.

Political tension has gripped this small central African state for months, triggered mainly by President Pierre Nkurunziza’s decision to run for a third term in office, a move seen by many as unconstitutional.

The unrest has been marked by a failed coup bid in May and the flight of tens of thousands of people to neighbouring countries. This week, second vice-president Gervais Rufyikiri became the latest in a string of top officials and legislators to flee the country.

It has been less than a decade since the end of Burundi’s civil war, which claimed some 300,000 lives after igniting in 1993. The conflict was driven by a power struggle between the country’s large Hutu majority and a Tutsi minority that had dominated government and the security forces.

Much of the provocative and hateful messaging fuelling the febrile climate in the run-up to Monday’s elections – and the presidential poll scheduled for 15 July – harks back to that era.

Other bits are just plainly aggressive. For example, a piece of government propaganda circulating on social media depicts an eagle – the symbol of the ruling CNDD-FDD party – its wings raised, yellow eye menacing, claws outstretched, as if descending to snatch its prey.

“Don't play with the Eagle!” says the accompanying text, in red, white and black, the colours of the national flag. “It will tear you apart, it will claw you and it will peck you. No one can stop the Eagle soar above the people.”

This appeared earlier this year on a senior CNDD-FDD politician’s Facebook page before being shared again on the social media site last month by a spokesperson for the president.

Nkurunziza loyalists are not the only ones generating such incitement. “We are killing the eagle,” shouted youths in Musaga, a district of Bujumbura, in early May, as a crowd of them tore apart a dead crow that was strapped, crucifixion-style, to a cross.

Protestors in the Bujumbura neighbourhood of Musaga pretend to feed beer to a dead bird that is intended to represent, and to denigrate, Burundi’s ruling party, whose symbol is an eagle. 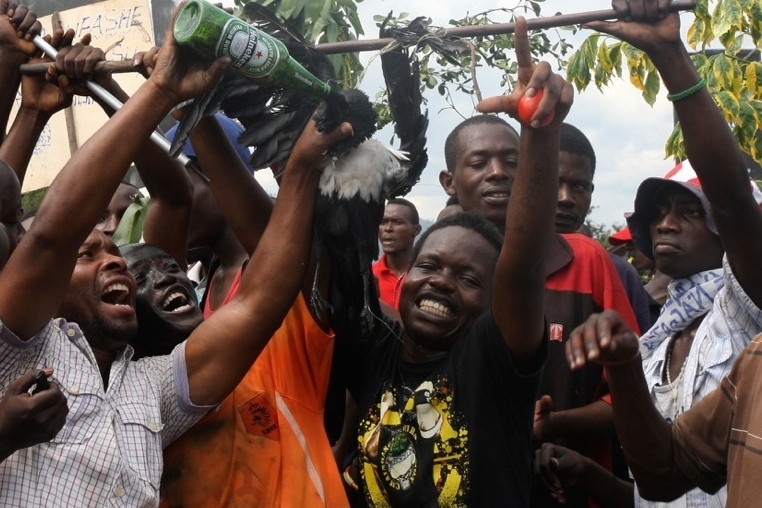 For those who lived through the civil war, the Kirundi word “kumesa,” used to issue a threat, is nothing new. Survivors of kidnappings and atrocities by rebels and soldiers alike recall armed men shouting “mumese!” an imperative form of the same verb meaning “kill him!”


The literal meaning of kumesa is to lather or wash. During the war, “to wash someone up” became a euphemism for beating or killing them.

The word has resurfaced again, used by the Imbonerakure, the youth wing of the ruling party during recent street protests over Nkurunziza’s bid for a third term. A government supporter was also heard walking down the street in Musaga muttering: “We’re going to wash you up.”

See: Who are the Imbonerakure and is Burundi unravelling?

Another word used by members of the ruling party, “zirye,” comes from Rwanda, and literally means “to eat.” It also carries a lot of historical baggage. During Rwanda’s 1994 genocide, those carrying out the killings of Tutsis used the command, “inyezi zirye,” meaning, “eat the insects.”

Pierre-Claver Mbonimpa, Burundi’s leading human rights campaigner, agrees that the language being used by both sides is dangerous. Even the government, he says, is telling its young supporters at rallies that everyone who is against the third term should be “cleaned up.”
(Mbonimpa uses the French verb “savoner”)

Examples of threats couched in metaphorical language abound. One Sunday in May, warnings appeared in bullet-point form on lamp-posts and road signs in districts of Bujumbura where protests were taking place.

Anyone who tried to leave their neighbourhood to go to work would be "figured out,” the poster said, because if they were not actively protesting then they were no better than those who support Nkurunziza, a Hutu and former rebel leader.

The Kirundi verb used was “gukorerako.” Its other meanings include to beat, punish and even kill. The same word was also used as a threat and an order by combatants during the civil war. You hear it a lot these days in Bujumbura.

Opposition leaders have been quick to reject the ethnic framing of the current crisis.

It’s almost impossible to control all their behaviour, but we try to stop them. It’s only when they’ve been provoked.

Standing on a makeshift soapbox in early May, Charles Nditije addressed youths in the restive district of Nyakabiga: “When I say us, I mean all the people, all the Tutsis and Hutus, all the protestors. Everyone who is against the third mandate. Now, there are Hutus who are against them, so they’re pretending it’s a fight against Hutus in order to regain support.”

At a CNDD-FDD rally in Nkurunziza’s hometown of Ngozi, Persille Mwidogo, first vice-president of the senate, insisted that the ruling party would never use divisive language. She told IRIN that the party promotes respect for fellow citizens above all.

Mwidogo laughed when IRIN asked whether the verb “kumesa,” to wash up, was being used to incite division and violence. “It’s youths amusing themselves,” she said. “It’s almost impossible to control all their behaviour, but we try to stop them. It’s only when they’ve been provoked."

Burundian academic Athanase Ntiyanogeye leafs through a selection of articles, some of which he considers to be hate speech, that were published during the civil war during the 1990s. 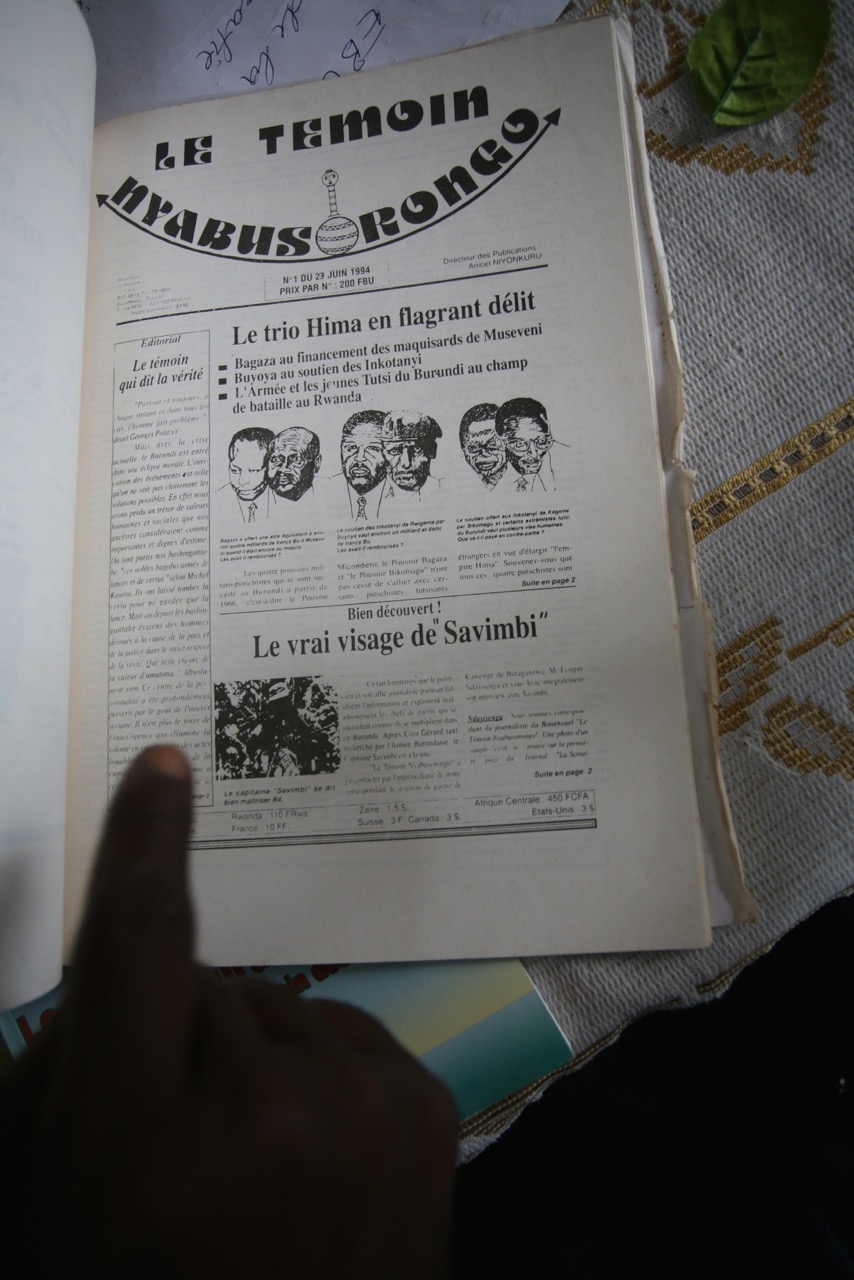 In retaliation, the government launched armed raids and arson attacks on all of Burundi’s independent media houses. Journalists who had painstakingly collected evidence of alleged hate speech and stored it in the buildings lost everything.

In the wake of this radio silence, social media – including blogs, WhatsApp and Facebook – took on new prominence as the sole means of communicating the news.

Although the Internet penetrates just two percent of Burundi, there is also a strong oral tradition here, so what initially only reaches a small minority is soon propagated to a larger audience by word of mouth.

There are now scores of propagandist websites, online groups and individual blogs – some anonymous, others fake – circulating disinformation on both sides of the political divide, including takedowns of politicians, civil society leaders and independent journalists.

Burundi 24, for example, cites a contact address in Paris. The blog's homepage presents a collection of character assassinations and unfounded claims designed to besmirch the ruling party, CNDD-FDD.

Burundi Forum, a pro-government website designed to look like a news site, opens an article about Pacifique Nininahazwe, who chairs the Forum for Conscience and Development and is a leading figure in the campaign against Nkurunziza's third term, “too much blood has been shed at the instigation of this man.”

“At the start, there was nothing ethnic about this crisis, it was just a clash of ideas,” a member of the Imbonerakure in the capital told IRIN. “Now, people are using the protests to conceal their ethnic designs,” he said, adding that cars are being burned simply because their owners are Hutu.

The Imbonerakure have also been demonised. Before the birth of CNDD-FDD, the word imbonerakure signified a white tree, one that could be seen from far away. It has now become a loaded term, synonymous with violence.

Protestors regularly claim that the police are firing live rounds. Those who enter anti-Nkurunziza neighbourhoods on unauthorised intimidation exercises at night must be Imbonerakure, they say.

But members of the Imbonerakure such as Pascal Bigirimana argue that it is a legitimate political group, simply consisting of party loyalists under the age of 35. Bigirimana, who lives in the Bujumbura district of Kanyosha, insisted there had been “no bad behavior” and dismissed allegations of violence as “clichés.”

Disassembling fact from fiction in Bujumbura is becoming harder by the day.